Blackmail dangerous to your health

It's not often you read a blackmail letter written by the CEO of a major company on the front pages major newspapers. But that's what happened today when David Crow, managing director of British American Tobacco Australia, delivered a threat to the Australian government.

It’s not often you read a blackmail letter written by the CEO of a major company on the front pages of the Daily Telegraph, Herald Sun and Adelaide Advertiser. But that’s what happened today.

David Crow, managing director of British American Tobacco Australia, delivered this threat to the Australian government: if you persevere with your plan to replace all branding on cigarette packets with a green colour and only the name of the cigarette and a graphic health warning, we will flood the Australian marketplace with half-price cigarettes.

“It’s going to backfire and go bad and lead to more people smoking, which is just mad if you’re sitting at a government desk,” Crow’s blackmail threat continued, and that “basically means more people will smoke, more kids will smoke.”

And by the way, the threats continued, we’re also going to fight to protect our brand names and demand billions of dollars in compensation if you go ahead with the plain-packaging plan. “Guys like us are going to defend our trademark … if they lose it [the legal battle], which we think they will, they’ll have to pay compensation and that’s billions of dollars — and that’s not a smart use of taxpayers’ money.”

As the war on smoking in developed countries reaches a critical stage for tobacco companies — and as the Australian government leads that global campaign with ground-breaking prohibitions — no one should be surprised when those companies ramp up their tactics to a desperate level.

But Crow should realise that blackmail, as well as smoking, can be dangerous to your health. 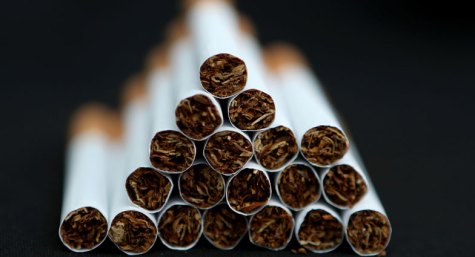 A tobacco executive sticks his head above the parapet and shouts rude words.
I’ll bet the Govt can’t believe its luck. 😀

As a former committed smoker ( am still surprised I don’t anymore) I find this behaviour by Crow to be outrageous. The Australian Government should take further action aimed at this individual and his company.

It will be interesting to see how the media, the government, opposition etc handle this one. It’s about as outrageous a stance from vested interests as you can have but they all seem to go missing in action when big business get their bully boy caps on.

Are you joking?
These a**eholes help fund the liar and his Liberals at the last elction. Smoking mining and Big Business lost their investment on that one and they are not used to losing.
They own MSM and the liberal party so there will be no stopping them. They now have 2 Tv staions, ratbag radio lunatics in each state and you can see the “balanced” press coverage it will get by the synchronised meadia releases in all states this morning.

They are selling death and want you to help them; and they are threatening you if you try and stop them; and tony abbot and his party are supporting them. And Tony is more popular than Julia.
WTF ? is everybody on drugs or am I missing something?

Mr Crow appears to be crowing too early with his threat. Even if the government lost a legal case they can still double (treble! quadruple!) the excise tax on tobacco. In fact, if they wanted to, they could ban it – with overwhelming majority support as 81% of the population are non-smokers. Mr Crow appears to have forgotten that the Australian government actually holds all the cards.

Apart from that Mr Crow sounds like a charming bloke.