I appreciate the comments made in your email.

These changes will actually improve the quality and depth of what we put into your newspaper. We made editorial production efficiencies so we can reinvest in writing and reporting.

We believe this is the right course, and will result in a sustained future for our newspapers.

The UK’s new super-injunction. The UK has achieved another dubious first, with a new super-injunction innovation — a ban on reporting a story on Facebook, Twitter and other social media. Of course, to complicate things, the story in question involves a mother asserting the right-to-die of her severely brain-damaged daughter.

But the funny thing about Twitter and other social media is that no one on these sites has breached the privacy of non-celebrity subjects of existing super-injunctions. Collectively people are capable of making decisions based on obvious matters of decency. Those who can’t are the UK tabloids, driven by a shrinking market to tap the phones and invade the homes of the bereaved and afflicted. — Guy Rundle

The Department of Corrections. The Asian edition of The Wall Street Journal made a very “Pacific” mistake in its May 13 edition: 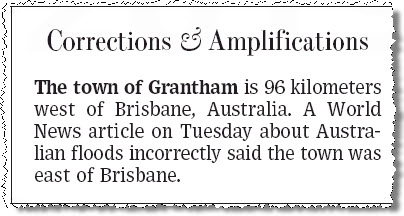 “The ABC’s news division is facing a budget crisis after a plan to cut international reporting costs failed and a string of international disasters led to a blowout in costs.” — The Australian

“Top Channel Nine identity and Collingwood president Eddie McGuire has indicated that his network could yet return as an AFL broadcaster.” — Sports News First

“Beginning this summer, the News Corporation, the media company controlled by Rupert Murdoch, will announce each year all the political contributions it has made.” —The New York Times

Trump re-hired on TV, so is he running for president?

“NBC released its 2011-2012 primetime schedule on Sunday, featuring six new dramas and six new comedies. Among the shows set to air in the fall is Donald Trump’s Celebrity Apprentice. Does this signal the end of Trump’s 2012 presidential ambitions?” — The Huffington Post

ROTFL
Today’s Dept of corrections from The Asian WSJ is *almost* as funny as FDOTM. 😀