When asked about the key climate-change issues, IPCC lead author Professor Roger Jones echoed the concerns of colleagues by saying: “Feedback is like climate change on crack. Denialists deny this in your dreams, Coz climate change means greater extremes.”

“Shit won’t be the norm,” added others.

If only all interviews on climate change could be this colourful, this frank and this … well… lyrical?

Earlier this week, Australian ABC show Hungry Beast screened an original rap video staring nine actual climate scientists, complete with “mutha f-cker”, a slammin’ gangsta baseline and scores of peer-reviewed science papers and decades of research to back it up. 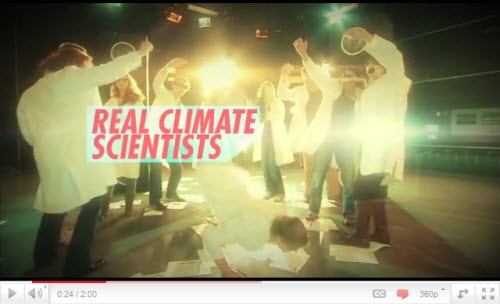 Since the original rap was posted on YouTube and other blogs (including this one) three days ago, the video has been viewed more than 56,000 times and reposted on sites in the UK, Australia and the US, including the Huffington Post, one of the world’s most popular blog sites.

For a viral online clip that features neither Justin Beiber, Charlie Sheen, Osama bin Laden or the unlikely and hilarious antics of domesticated cats, this is a remarkable return.

Hungry Beast presenter, comedian Dan Ilic, co-creator of the clip, told me he had “basically blackmailed” the climate scientists several weeks ago into taking part by threatening to “burn a pile of 100 spare tyres” if they didn’t do it.

“I was actually very surprised they agreed but some thanks goes to my producer for helping to get it over the line,” he adds. To write the lyrics, Ilic consulted the group to ask what the key issues were on climate change. “They told me that it’s real and it’s happening. They talked about how climate feedbacks are an extraordinary thing,” he says. “When permafrost melts there’s a stack of methane that’s released which just adds exponentially to the problem,” hence the lyric “Feedback is like climate change on crack.”

The group of scientists were approached to take part by Ilic, who has been behind several successful viral satirical videos for community advocacy group GetUp and other campaigns.

Jason Evans, of the University of New South Wales Climate Change Research Centre, says the offer to take part was hard to refuse, given he is a “closet rap fan” from way back.

Finally allowed to release his inner Beastie Boy, Evans, who researches impacts of climate change at regional levels, slams the first line “yo … we’re climate scientists … and there’s no denying this Climate Change Is REEEEALL.”

He’s also had his fair share of engagement with climate sceptics, although none quite like this. “You can’t be a researcher in this business for long without having to have exchanges with sceptics or deniers,” he told Crikey. “But then it also doesn’t take long for you to realise you are wasting your time,” he adds. Evans used to reply to sceptics with copies of peer-reviewed research, but these days he sees little point.

“They have made their mind up so it’s pointless engaging and, anyway, all my work is publicly available. This was really a much more fun and light-hearted way to get that message across.”

Evans says that the hardest bit to rap was the line ‘Denialists deny this in your dreams, Coz climate change means greater extremes, Shit won’t be the norm, Heatwaves bigger badder storms.” But then he revealed that after he and colleagues spent an hour and half recording the audio for the track, their voices were not used in the end.

“That may tell you something about our actual rapping ability. We were just the pretty face on the front… but we are working on our first album,” he added, worryingly.

Dr Ailie Gallant, a University of Melbourne researcher in climate change and climate variability, says she took part because it “highlighted the issue of unqualified opinions on climate science by politicians, economists etc., in the media”. She also thought it was funny.

There were others who didn’t think it quite so hilarious. After undergoing a collective sense of humour bypass, climate sceptic bloggers including Tim Blair, Andrew Bolt, Anthony Watts and Steve McIntyre all grumbled disapprovingly.