Cox: PM’s macho social agenda has balls but no heart

The whole Women's Budget statement is a paean of praise for the virtues of hard work and economic participation, like so much of the rest of the budget

Yesterday the Women’s Budget statement was released. It’s a paean of praise for the virtues of hard work and economic participation, like so much of the rest of the budget, as the paragraphs below show (my bold).

But where is the awareness that the social areas of life contain the essential roles in human society that make up the significance of life? A few dollars more doesn’t really compensate for the limited views expressed below…

Gender equality will not only benefit individual women and men, but also enhance social and economic participation. This is integral to boosting Australia’s long term prosperity and ensuring a strong economy now and into the future.

The 2011–12 Budget remains on track for a return to surplus in 2012–13. The Budget includes a range of measures that will strengthen Australia’s future workforce by boosting participation, rewarding work, providing new opportunities through training, education and services, and introducing new incentives for some groups. A number of measures in this Budget also provide extra support and more timely and flexible assistance for families.

The Women’s Budget Statement 2011–12 highlights measures that will advance gender equality through building a productive workforce, plans for participation that address entrenched disadvantage, provide cost of living relief for families, support children with disability and their carers and respond to men’s and women’s mental health needs.

This extract deeply reinforces the government view that equality for women is only available if we join the male main game. The emphasis of the budget is so tied to seeing paid work as symbols of economic success that social goals and well-being are totally lost. It is interesting that our first female PM’s policy agenda is so macho that it seems to have balls but no heart.

Macho economics is not a good framework for setting national political directions for  the good society to live in, as it blinkers out the ethics, relationships and connections  that make life worthwhile. The flaws show up in measures such as Gross Domestic Product that fails to distinguish between good and bad activities so wars and cyclones tend to push up productivity and fewer road accidents cut it. The worlds of paid work, markets and trade are important but should serve social well-being, not override it

Paid work is still run on lines that suggests it is still for men without family demands. Feminism, or maybe, the movement for the liberation of women, was not for equality with men on male terms. We even had a badge that said women who wanted equality with men, lacked ambition. We were looking for changes to undervalued feminised roles, tasks and skills. This was the revolution: rebalancing the gendered judgments about what mattered and who took on roles in communities, households and positions of power. We didn’t get there, as neoliberalism and conservatism reinterpreted the world so the collective sharing of risk and reframing of jobs were lost in a welter of bad equations.  So changing macho workplaces is still on our agendas

I am annoyed by the misuse of feminist rhetoric to justify very conservative anti-feminist policies. Yes, feminists strongly support the rights of women, particularly mothers, to have paid jobs and not be limited by household roles. But we neither accept nor advocate that women should be coerced into taking on paid work. There are  risks and benefits of paid work and being excluded from it that affect choices.

Feminist role change was not about aping the ideal committed male worker, who has neither time nor interest in taking on family chores and care. We want changes to hours and conditions in all workplaces so men and women can balance family and community demands with paid work. The current view that part-time workers are not serious must change and views by  employers that employees, male or female, must prioritise the job over family needs. This is why mothers often are not offered jobs they try for.

Current workplaces seem now to demand ever longer hours, more intense work and less flexibility. The rhetoric has changed as firms compete for well-qualified women who can do it on male terms, but this does not filter down to the precarious sector of casuals and subcontractors. There is increasing evidence that bad jobs are not good for workers and may damage their health and caring capacities. Finding jobs with hours that allow flexibility and dealing with sick children is not easy.

Therefore, policies that place official coercion of women to increase their participation in paid work, including sole parents is the wrong way to go. Sole parents are usually happy to take paid work that doesn’t create tensions between their parenting roles and their job. They are often only offered really crappy casual jobs that lead nowhere and even leave them financially worse off.

Of course it would be good to help young mothers to complete education and training but why not start by making sure that there are programs with on-site care for all mothers who would like to continue study post-baby? I am sure there would be a rush.

Why don’t the PM and other female, even feminist-claiming, ministers such as Jenny Macklin and Kate Ellis, see the limits of macho-devised economic policies? Didn’t the GFC cast some doubts on the discipline? Of course, senior women will display as wide a range of competencies, politics and empathies as do men, but I hoped this lot might know better. They should question the assumption that any job is the key to the good life. But apparently they did not. Otherwise they would not be dropping the weekly income of $50,000 sole parents by $57 “for their own good” to force them into more paid work. This approach seems to me to be very patriarchal.

Cox: a centenary of continuous struggle for women 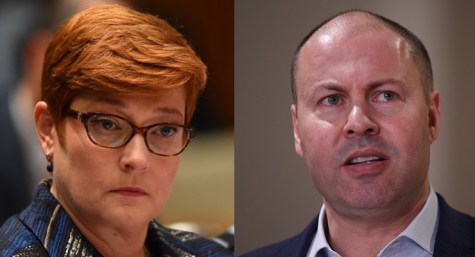 Its just more of the ‘working families’ rhetoric we got from the previous government, another phrase that excluded more than it included. If the Labour party ever sits down to analyse why they bleed votes to the Greens, this would be on the list. The nonsense spouted above ignores all that unpaid work that (mostly) women do – carers of children, elderly parents etc etc

We can only sigh, shake our heads and remember this next time we vote.

Thanks Eva,
Re “a few dollars” . One of the essential roles in human society is to have a purpose and both paid and unpaid work can satisfy this need. Unfortunately it’s only the paid work that gives women some financial control over their life hence the importance of paid work to their identity and self-esteem. I used to be one of those well-qualified women who could work on male terms. That changed with marriage, parenting, emigrating, retraining and postgraduate qualifications – none of which helped me participate in the Australian workforce. Having a child at 40 and then being out of mainstream workforce for ten years has made me invisible to, and unemployable in, the eyes of employers. Being excluded from the workforce means no pension contributions, and can lead to chronic mental health problems. I agree that the current view that part-time workers are not serious must change. Why do current workplaces seem now to demand ever longer hours, more intense work and less flexibility when many highly qualified women (and men) over 50 are desperate to participate and release younger women (and men) for parenting duties. You are right to question the assumption that any job is the key to the good life. However I calculate that I have performed over two years of voluntary work in the past five (excluding parenting) and notwithstanding the positive emotional value of this, none of this has resulted in even ‘a few dollars’ and has absolutely no ‘value’ in the eyes of potential employers. Until the government tackles ageism against women (and men) I see no hope for part or full time prospects of work for older women who want it or full or part-time relief from work for those women who need it.

Sending you this from Dublin where we are just expecteding the Queen (yours too but not ours!) who is about to call on us, well not me personally. Your article is terrific and begs some more reflections arising from this theme. In addition to the effects of women excessively embracing a masculine way of being in the workplace and in the practical activities of the rest of life, this adoption by women of too much masculinity has had a shocking, yes shocking, effect on the psyche of women in this generation. Perhaps women had nowhere else to go but we are now left with the entire of western society ridiculously occupying male pants! The shift in consciousness that the human family as a whole now requires emerges from a feminine consciousness and that is where it is coming from, in both men and women. This process towards a recovery of the feminine with its associated liberation of the true and compassionate masculine outlook is not immediately obvious or visible but the shakles of imprisonment in the old outdated stereotypes are creaking and in time these will give, and we will be presented with the possibilty if not the reality of a new paradigm and appropriate balance of masculine and feminine in both our activities and our souls. Bring it on!

I am angry that teenage sole parents are being targeted for work rather than support in raising their children. As anyone who has had a child knows looking after their basic needs is time consuming and teenagers are some of the least organised people around. Placing children into jeopardy by insisting that their mothers attend classes or work is naive at best.