Variation on a theme

Space and time in the media expands to fit the journalists available.

Variation on a theme. Space and time in the media expands to fit the journalists available. That’s the conclusion I have reached about the way this rather meaningless federal budget is covered. And not just budget coverage really. It happens every day.

It is as if news editors who have all these highly paid resources in Canberra think that what they churn out must be important and thus given prominence. And to hell with what the readers, viewers and listeners are actually interested in.

You will get my drift if you look at the front pages of this morning’s papers and compare them with what stories are currently on the most read list on the web sites of those very same newspapers. 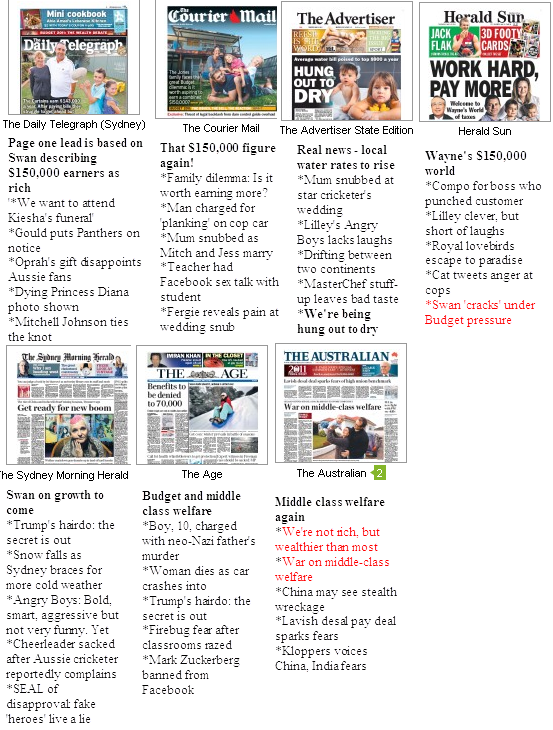 Apart from The Australian there is not much of a correlation between the editorial news sense and the interest of the readers. And even that Melbourne Herald Sun yarn that sneaks into the top five list is actually a fun  piece about the Treasurer breaking a glass during an interview rather than what he actually said during it.

I wonder what would happen to a newspaper’s circulation if the best journalists were assigned to writing about something other than the political nonsense?

Picking the lies. Some helpful hints for those of you determined to take political interviews seriously is given in a soon to be published paper in the American Journal of Forensic Psychiatry.

UCLA professor of psychology R. Edward Geiselman, is an academic who has has taught investigative interviewing techniques to detectives and intelligence officers from the FBI, the Department of Homeland Security, the Marines, the Los Angeles police and sheriff’s departments, and numerous international agencies.

Along with three former UCLA undergraduates — Sandra Elmgren, Chris Green and Ida Rystad — he has analyzed some 60 studies on detecting deception as well as conducting original research on the subject. They present their findings and their guidance for how to conduct effective training programs for detecting deception.

Geiselman and his colleagues have identified several indicators that a person is being deceptive. The more reliable red flags that indicate deceit, Geiselman said, include:

Some vintage political speeches and music. The US Library of Congress calls it the National Jukebox — a collection of historical sound recordings available to the public free of charge. It is a fascinating collection. Here are a couple of links to get you started: William Jennings Bryan on An Ideal Republic and Enrico Caruso in 1905 singing Romance de la Fleur.

“I wonder what would happen to a newspaper’s circulation if the best journalists were assigned to writing about something other than the political nonsense?”
That would spoil this on-going eternal flame of a political narrative Limited News has got burning in it’s window!

Struggling on “130 G’s” a year? Imagine how those of us on 50 and less get on? Which is probably all they can do, “imagine”? Who writes this stuff, with what other motive, but embarrassing a “Labor government”? Where was this “high moral concern” while Howard and Costello were doing much the same thing?

The problem is the greater readership of newspapers do take seriously what is written, as a jurno Richard, you know the story is not always in the headline. But how many just read the header and decide thats good enough and turn the page?