Assange keyholed … Kernot on the BBC …

After taking a whole day to report on Julian Assange's peace prize win, The Guardian weirdly photoshopped Assange's face. Plus, other media news of the day.

The Guardian peers into Assange. As a secret grand jury investigation opens in Alexandria, Virginia, to consider whether WikiLeaks leader Julian Assange, an Australian citizen, has broken the 1917 US Espionage Act, The Guardian has confirmed its attitude to its former partner is now so conflicted it can’t even think straight about the grey blur.

Having reported a day late on the award to Assange of the Sydney Peace Prize, The Grauniad‘s chosen image was this treated version of a Reuters pic of the event… 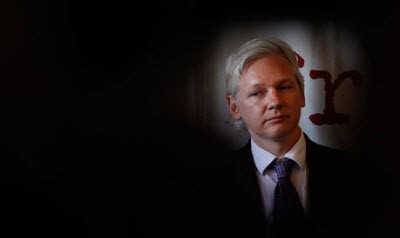 Weird, since The Guardian rarely ever runs such mucked-about-with photo art. But the spooky keyhole effect does serve to obscure the crowd, the event, or the backdrop of the Frontline Club, the London independent journalists’ hub.

Those subpoened (secretly) to appear before the grand jury appear to be from the Boston-based hacker community, of which Bradley Manning was a part — and have apparently contacted the Centre for Constitutional Rights to find out what they can say — or can refuse to. They can’t tell us about it, because, under US law, it’s a crime for grand jury witnesses to confirm the existence of the jury they’re being questioned in front of — Guy Rundle

Cheryl’s BBC coalition chat. On the first anniversary of the Lib-Con coalition I switched on PM, BBC Radio 4’s afternoon current affairs show, to hear “and now a voice from Australia…”. Oh god, it’s Cheryl Kernot, in an interview whose true hilarity only her compatriots could appreciate.

Start with her advice about getting involved with another party: “Mr Clegg should be a bit more public about what they’re doing…” The main adjective associated with coalitions: “There’s a lot of compromising going on…” And some sage wisdom on what it’s like in these situations: “It’s a bit hard to be muscular when you’re lying flat out on the canvas…” At which point your correspondent fell off his chair.

Food fight on the Sunshine Coast. There’s trouble brewing in the Sunshine Coast online foodie community at the moment, after the Noosa Food and Wine Festival appeared to have its logo pinched by a rival unofficial Twitter account.

The festival, which is set to launch next week, has about 200 followers on Twitter — a number which pales in comparison with the @Noosa_Food_Wine unofficial account, which boasts more than 700.

The official account @NoosaFoodWine has also tweeted its displeasure at the use of its logo:

The festival has sent out a barrage of tweets telling followers not to pay attention to its rival:

According to the Noosa Food and Wine Festival website, APN Newspapers is not a sponsor of the event. — Tom Cowie

And the supplementaries are. Here at Crikey we’re pretty unashamed of our love for the NT News, but sometimes it’s not all rosy in the land of crocs, UFOs and bikini babes. Unfortunately today the Top End redtop committed the cardinal sin of tabloid newspapers — they got the lotto numbers wrong.

Happily, the paper took to Twitter to rectify its mistake. Here are the lucky numbers if you were playing at home:

Front Page of the Day. The New York tabloids keep on kick’n on… Syria says detained al-Jazeera journalist has been sent to Iran.

“Syrian officials have told al-Jazeera that one of the network’s journalists, a woman with extensive connections in the US and Canada, was sent to Iran after her detention last month in Damascus.” — The Guardian

The economics of digital journalism.

“Fifteen years after most news organizations went online, it is clear that old media business models have been irrevocably disrupted and that the new models are fundamentally different from what they once were. What made traditional media so vulnerable to the web? Or perhaps the better question is this: Why has digital technology, which has been such a powerful force for transmitting news, not yet provided the same energy for companies to maintain and increase profits?” — Columbia Journalism Review

“If all online searches are literal, what happens to the headlines that involve a play on words? Are those headlines relegated to the print edition, where headline writers have a captive audience? Indeed, as newspapers embrace search engine optimization, and as young journalists are taught to value Google visibility above all else, many copy editors fear that funny headlines are quickly going the way of the classified ad.” — The Atlantic

Twitpic users now officially own copyright of their uploads.

“In the Wild West of online content ownership, Twitpic – the popular photo sharing service for Twitter – has taken a stance in favor of content creators. It has updated its terms of service to explicitly state that “all content uploaded to Twitpic is copyright the respective owners.” We’ll see if other photo-sharing services follow suit.” — Mediabistro

Some sibling rivalry erupted between News Corp stablemates over an "exclusive" story, and other media tidbits of the day.

West Papua has shown once again that freedom of speech is only for those who follow the rules.