Fairfax has once again been criticised for changing its stories online to avoid embarrassment, after a fiery video of celeberity chef Matt Moran turned out to be a fake. Plus other media news of the day.

SMH online cover-up ‘wrong and offensive’. Fairfax has once again been criticised for changing its stories online to avoid embarrassment, after a fiery video of celeberity chef Matt Moran turned out to be a fake.

Media website Mumbrella has provided a before and after snapshot of a smh.com.au story about the video, which does not appear to show any acknowledgement the story has been altered — or if the website had been hoaxed. As Mumbrella writes:

“You’d think the Sydney Morning Herald’s online edition hadn’t been hoaxed by the Matt Moran story at all. If you look at it today, their story about the fake video, bylined to Georgina Robinson, begins:

‘Move over Gordon Ramsay. No, make that Christian Bale.

‘It turns out ARIA co-owner Matt Moran is as good a foul-mouthed actor as he is a chef.

“Which is not how it originally read. Happily, having a suspicious mind, Dr Mumbo took a copy in case anybody attempted to rewrite history. The original intro read:

‘Celebrity Sydney chef Matt Moran has proved he can rival his British counterpart in the foul-mouthed anger stakes.

‘Moran, co-owner of one of Sydney’s top restaurants, Aria, has been caught on film throwing an explosive tantrum at a food stylist who threw away a dish the chef had just prepared.'”

This morning Robinson took to Twitter to defend the yarn, telling Mumbrella that the story had been updated four times as the story developed.

“It is our standard practice to update a yarn in a single template — we don’t create new articles with each update,” she wrote. “An example of this is my story today, which now has a different lead to reflect new information.”

Robinson said there was further evidence in her Twitter feed that there was no cover-up and to suggest so was “wrong and offensive”. — Tom Cowie

The Cat is not for sale. The 3AW rumour file this morning had a story suggesting that Anthony Catalano has sold his Weekly Review operation to Fairfax for big bucks. I just spoke to Catalano, and it isn’t true.

He said: “I just got off a plane and heard the same rumour. If I have been sold, then I don’t know about it.” Nor, he says, are any talks underway: “We are not on the market.” — Margaret Simons

D-Day for subs at Fairfax. If we enter into the fantasy that the decision to outsource subbing at Fairfax has not already been made, then we believe that today is the day when CEO Greg Hywood will communicate with his staff and the union on their proposals for alternative rationalisations. The Fairfax staff campaign site is here. They are appealing for readers to email Hywood.

There will, I understand, be a stopwork meeting tomorrow at 4.30pm. — Margaret Simons

And here is the impassioned plea… which hit Crikey‘s inbox this morning:

We urgently need your help

Wednesday, 11 May 2011
Today, senior executive managers at Fairfax Media will decide whether to sack 90 journalists and outsource their work.

The firing of these journalists will leave your newspapers — The Sydney Morning Herald and The Age — critically understaffed. It will mean the quality control and fact-checking mechanism of the newsroom — subeditors — will be removed.

These newspapers are not mere commodities, able to be hacked away and disfigured, because they are part of the fabric of their communities. They hold power to account, and are vital to the prosperity of our cities, our country, and our democracy.

Journalists at Fairfax have been touched by the support you’ve shown since Fairfax CEO Greg Hywood’s announcement last week. But we are calling on you once again to show your support, by emailing Greg Hywood today, and telling him why you read the Herald, or The Age, and why you believe quality, independent journalism needs to be maintained in Australia.

Post-budget front page wrap. It wouldn’t be a post-budget edition without a lovingly-drawn caricature of the prime minister and treasurer. This morning the tabloids have gone with top hats and mining carts: 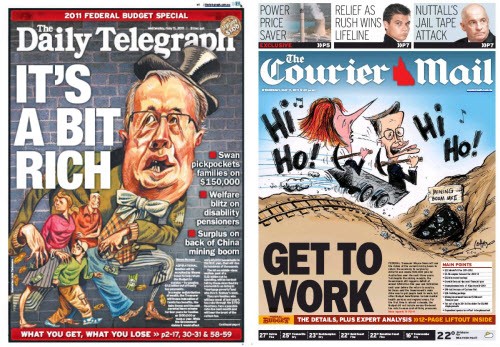 The broadsheets have got Julia in a hard hat and Wayne with a pen knife: While the NT News has (perhaps unsurprisingly) avoided the budget altogether and gone with crocs: “WikiLeaks founder Julian Assange has warned whistleblowers to steer clear of rival whistleblowing sites set up by mainstream media outlets, saying that almost no website other than his own could be trusted.” — The Australian

“De Voce, a weekly Brooklyn Hasidic magazine, has dropped Hillary Clinton and Audrey Tomason from its pages, much as the Der Tzitung newspaper did. The magazine does leave somewhat blurry lines to suggest the photo was altered, as if a ghost Clinton still lingers, but the females are nevertheless scrubbed from the room.” — Washington Post

“Advertisers have pulled their advertising from News Limited columnist Andrew Bolt’s new TV show on Network Ten despite Ten telling us that the show is ‘selling well’.” — themusic.com.au

Microsoft pays $8.5b for Skype, now how will they change it?

“Skype users — especially those who use Windows — should expect to see video ads and portal homepage information coming to the app in the future. This makes sense. If Google or Facebook had purchased Skype, chances are they would take a similar approach.” — Mashable

Guardian ‘could not go it alone’ with WikiLeaks, admits editor

“The Guardian editor-in-chief, Alan Rusbridger, said today that the paper had opted to team up with the New York Times to publish its WikiLeaks:  ‘The reason we decided to partner with the New York Times was a simple one. We suspected that, if we went it alone under the framework of laws governing newspapers in this country, we simply wouldn’t be allowed to get away with it. We would be sued, or injuncted,’ he said.”– The Guardian

“Founders of YouTube, Chad Hurly and Steve Chen, who own a new web company called AVOS, bought another startup. Tap11 is a real-time business intelligence platform, allowing companies to monitor their effectiveness on the Internet.”– MediaBistro

“Google is preparing as early as Tuesday to unveil a new online music service similar to a service recently launched by Amazon.com, a move that escalates the battle to create the next generation of Internet businesses for storing and listening to music.” — Wall Street Journal

Channel 9 ran the Matt Moran tantrum story as if it was a news event, and THEN at the end of the video bit told us it was fake.
Sort of like having your cake and ……

If you’re going to change your story over time, then you should have changelogs like wikipedia do. Anything less is dishonest, and is apt to show up as egg on your face when others (hello googlecache) show what was there