While the current British and French prime ministers bemoan the inadequacy of GDP to measuring their citizens’ wellbeing, for over a decade Australian bureaucrats have been getting on with building the means by which we could take a more sophisticated approach, writes Nicholas Gruen.

While the current British and French prime ministers bemoan the inadequacy of GDP to measuring their citizens’ wellbeing, for over a decade Australian bureaucrats have been getting on with building the means by which we could take a more sophisticated approach.

The Australian Bureau of Statistics’ Measures of Australia’s Progress is building a valuable resource from which we can take a much richer snapshot of our economic, social and environmental wellbeing — not to mention our physical health.

The Treasury too was onto the issue well before the British and French leaders and many of its bureaucratic counterparts around the world. One of Ken Henry’s enthusiasms, prosecuted also by his then deputy and now successor Martin Parkinson, was for Treasury to build a “wellbeing framework” which would underpin a broad view of human wellbeing as consisting of much more than GDP or GDP per capita.

How is the framework affecting the way Treasury earns its daily bread? The budget papers ought to give us some idea. And the answer is … it’s very hard to say.

The five dimensions of the framework are outlined in the inevitable corporate diagram below. (He didn’t say it, but had Orwell lived through new management he would surely have told us not to pretend that a chart means more that the list of words on it.)

The five chosen dimensions of wellbeing owe a lot to Amatya Sen’s “capability framework”, which takes the foundation of human wellbeing to be the building of human capabilities which enable people to make choices they have reason to value.

Wisely, Treasury hasn’t bitten off of more than it can chew. As Parkinson points out, giving the framework one of its first serious public outings in a paper discussing some of the issues in economic theory, it was neither a checklist nor an analytical framework but “a descriptive tool”.

The two most impressive papers, Parkinson’s and one showing similar erudition in economic theory by Banerjee and Ewing, were both published in 2004 when the endeavour appears to have been at its height. The Treasury saysthe framework “reinforces our conviction that trade-offs matter deeply”. But those papers leave it unclear how the framework might illuminate or change those tradeoffs other than in the most general terms.

There’s been little public evidence of development of the framework or its implications since. Subsequent contributions seem slight and derivative of the earlier papers.

Treasury has previously been expansive about the limitations of GDP, emphasising that its own framework encompasses “non-market goods and services, both material and intangible, voluntary work, personal and professional relationships, the quality of the physical environment, education, health and leisure”.  Well and good, but these things are hard to operationalise.

Treasury does score in my book for explaining that the focus on distribution acknowledges “the higher value of an extra dollar to a poor person versus a rich person”, a proposition which was commonsense to economists in the early years of the 20th century but which fell into controversy and disfavour as the profession put progressively more of its eggs into the basket of aping the formalism of the physical sciences.

But there is one implication that one might draw from Sen’s work and the framework’s self-stated focus on ‘consumption possibilities’. GDP implies focuses on production not consumption. It’s a good measure if you’re targeting activity in the economy — which you do if you’re trying to keep people employed as Treasury so magnificently did through the financial crisis.

And as Treasury notes, consumption tracks production fairly closely as you would expect. In a market you can’t buy much to consume if you don’t produce anything to offer in return. But Net National Income (NNI) is a better measure still — as it nets off the depreciation of physical capital and allows for income flows in and out of the country.

A greater focus on income rather than production as measures of material wellbeing is indeed the very first recommendation 1 of the high profile French Commission on the Measurement of Economic Performance and Social Progress by Amatya Sen and Joe Stiglitz and Jean-Paul Fitoussi. The choice of indicator can make a difference, particularly for countries like Australia which are substantial capital importers. (For instance Ireland’s performance over the last 20 years looks somewhat less stellar when NNI is the measure).

And getting the framework right can matter for critical policy decisions. Indeed last year’s Crikey budget correspondent John Quiggin argues the Henry Review’s view on capital taxation is in error because of its focus on GDP rather than NNI as its criterion for economic welfare.

I searched the budget papers in vain for any reference to net national income. At least the word “wellbeing” is liberally sprinkled throughout the papers, but alas, never clearly bringing in any of the dimensions of the framework. The expression “wellbeing framework” doesn’t appear, at least according to my word search function.

Still I commend Treasury’s wellbeing framework — not least to Treasury. 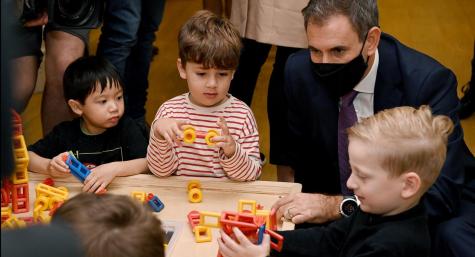 Federal budget to measure ‘what matters’

Nothing but economic grey skies from now on

“Treasury does score in my book for explaining that the focus on distribution acknowledges “the higher value of an extra dollar to a poor person versus a rich person”, a proposition which was commonsense to economists in the early years of the 20th century but which fell into controversy and disfavour as the profession put progressively more of its eggs into the basket of aping the formalism of the physical sciences.”

Is this an adequate or even useful statement? Comment (25 marks)

Honours candidates will be expected to respond to the propostions that richer people need more additional money in order to obtain an equivalent enhancement of welfare compared with a relatively poor person, that the community and economy will not reliably obtain the benefit of the potential contributions of high earners if they are not rewarded with incomes which reflect the fact that they are already materially well off and therefore need to be paid much higher incomes to provide an economic motivation; and that few people in Australia are so poor that realistically possible increases in transfer payments will make a major long term difference in their subjective welfare. (75 marks)