Age staff rally around support order. Staff from Fairfax’s storied Melbourne beachhead The Age will descend on the coffee shop to send Greg Hywood a message…

As part of the union campaign to get Fairfax to start bargaining with us, can EVERYONE in editorial please go to the coffee shop this morning to sign a “majority support order”.

Union organisers are there to take your signatures.

This is a new mechanism under the Fair Work Act when employers are trying to hold up negotiations.

We need to show Fair Work Australia that a majority of Fairfax editorial staff are on board and want the company and union to begin negotiations NOW.

Under the new laws, the company has to write to each employee to advise them that they will be commencing negotiations. This has not happened yet, despite the Alliance providing them with our log of claims at the beginning of April.

Please don’t leave this to everyone else, your signature and support is essential.

The union team will be here in force from now until 11.15, then again this afternoon when the subs will be making their way in.

Linda Grinter will be here for the entire day if you come in late or are out on a job this morning.

For people who aren’t at work today (Monday) House Committee members will have copies of the pledge for you to sign tomorrow.

Front page of the day. The New York Post is really hitting its straps at the moment where its coverage of the death of Osama bin Laden is concerned… 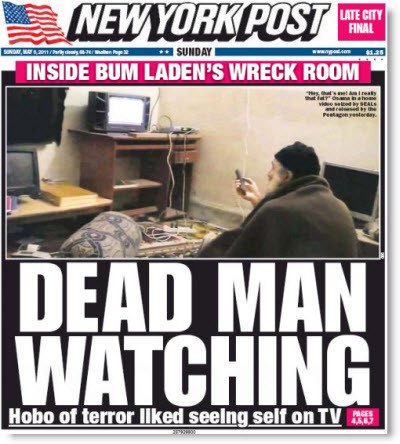 The Department of Corrections. The New York Times on May 7 contained perhaps the nerdiest correction in the history of newspapers. Kudos to Gawker for bringing this to our attention:

“An item in the Extra Bases baseball notebook last Sunday misidentified, in some editions, the origin of the name Orcrist the Goblin Cleaver, which Mets pitcher R. A. Dickey gave one of his bats. Orcrist was not, as Dickey had said, the name of the sword used by Bilbo Baggins in the Misty Mountains in The Hobbit; Orcrist was the sword used by the dwarf Thorin Oakenshield in the book. (Bilbo Baggins’s sword was called Sting.)”

Meanwhile, the glut of Osama bin Laden corrections continue, this time with the May 7 international edition of The Guardian: “Ultra-Orthodox Hasidic Jewish newspaper, Der Tzitung, has determined that the photo of top U.S. leaders receiving an update on the mission against Osama bin Laden was too scandalous. Der Tzitung edited Hillary Clinton out of the photo, thereby changing history. To my mind, this act of censorship is actually a violation of the Jewish legal principle of g’neivat da’at (deceit).” — The Jewish Week

“When the uprising in Tunisia began last winter, as most Western media outlets stayed away, Andy Carvin (@acarvin), a digital strategist at NPR, began tweeting fragmentary reports of protests, violence, and salutary acts of courage uploaded by “citizen journalists” — ordinary Tunisians capturing the revolution in real time. Since then, Carvin has been the world’s go-to source on the Arab revolt, tracking gripping and often bloody news and footage on his Twitter feed.” — Foreign Policy

“The Audit Bureau of Circulation is set to unveil its new rules on what constitutes a paid sale, seven months behind its original schedule. The review was triggered by growing concerns that audited numbers lacked transparency, with it almost impossible to tell how many copies had been sold at full, or near full, price.” — mUmBRELLA

European ventures seek to fill a void in world news

“As news organizations around the world close down foreign bureaus, journalists, entrepreneurs and even government bodies in Europe are creating news ventures to try to fill the void. — The New York Times

“News Corporation cannot make a move to take over Formula One by buying out the sport’s minority shareholders because private equity group CVC has first refusal on any stakes offered for sale.” — The Guardian

Ahhh, “Lightnin'” Bolt – “Doin’ the Time Warp” – Sunday, after lunch, Bob Santamaria’s “Point of View” and the shops all shut too (just like his mind)! How many years ago was that?

Re Bolt ‘For the show to work, The Bolt Report and its host need to be bolder.”