In the Sunday newspapers was the story of the federal Labor government having accepted one of Andrew Bolt's recommendations. And not a word from him about this confirmation of his importance.

Big policy win for Andrew Bolt. He’s a humble and modest fellow, that Andrew Bolt. There he was on the tele yesterday for the debut of his new political talk show. And there in all the Sunday newspapers was the story of the federal Labor government having accepted one of his recommendations. And not a word did our man Andrew say about this confirmation of his importance.

Let me explain. On March 17 last year when Kevin Rudd was still prime minister, Andrew Bolt  in his News Limited column stopped criticising the continued arrival of boatloads of asylum seekers at Christmas Island for a moment to actually propose a solution. He wrote:

So here’s a simple plan to fix everything – a plan first suggested to me by Family First Senator Steve Fielding to stop the boats dead without being at all cruel.
Let’s announce that from today we’ll send every boatload of “asylum seekers” we intercept to some refugee camp in Indonesia, Pakistan or whichever other country we can persuade to take them.

Yes, you’re right. Those countries won’t want our rejects, so let’s make them an offer they can’t refuse.

For every single boat person they take from us, we’ll take two genuine refugees from their camps.

What could be fairer? We’ll be twice as kind, we’ll send the boat people to safety and we’ll reward not those who’ve pushed in but the refugees who have waited the longest in line.
Two refugees for every boat person. Guaranteed to stop the flood like nothing Rudd has ever tried.

If the Prime Minister has a better idea, let him now explain it. But I haven’t heard one yet in the two years since he made his fake promise to “turn ‘em back”.

At the time I wrote in Crikey that If you really did “believe that queue jumping is the great evil when accepting boat people, the plan has a certain logic about it”. And so, it seems, Julia Gillard agrees. Her Malaysian swap plan comes straight out of the Boltian playbook with the exception of the swap ending up as five for one rather than two for one.

My fearless budget prediction. The forecasts on which all the figuring for tomorrow night’s budget is based on will turn out to be stunningly wrong.

The low tax country. I wonder when Australia will next see a treasurer giving a budget speech containing income tax increases. We are, after all, a low-tax country by comparison with most others. 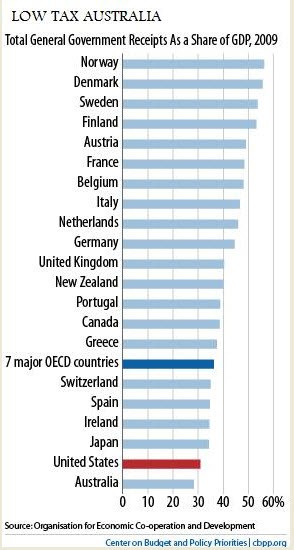 Treasurer Wayne Swan delivered Australia's 2012-11 financial year performance yesterday -- with a bucket-load of spin. If only business CFOs could get away with it ...

Given the magnitude of the burden of mental illness and the scope and extent of needs in the mental health sector, the Gillard government's significant down payment on new and expanded services can only be considered the beginning, writes Lesley Russell.

If CCS is a failure, then we deserve to know where our money has gone.

Seriously what could you have expected.

Now they have copied it.

As Peter Garrett confessed to Steve Price: “we will just say whatever we have to, in order to get into Government, and then we will change everything”.

That is why we are sick and tired of these grubs.

They are complete hypocrites. Not only that, but whenever they have conned their way into power it has been a complete and utter economic train wreck.

We’ve got another 2 1/2 years until an election and then we can throw out Gillard, Swan, Brown, Oakeshott and Windsor. I’d get rid of that Greenie in Melbourne and also Wilkie because they’re even worse than the Labor parasites.

It’s great to be reminded again that Australia taxes far less than other OECD countries.

I hate to say it, but the Bolt / Fielding plan has plenty of merit. The lynchpin though is that the second party to the agreement simply has to a be a signatory to the Convention Relating to the Status of Refugees. The fact that Malaysia is not makes the currently proposed “solution” unconscionable – especially given Malaysia’s abominable record on human rights.