The Age of emptiness. The shambles at The Age over the sacking of 45 subeditors is making a mockery of Fairfax’s rental of Grocon’s gleaming $110 million Media House edifice. Editor Paul Ramadge championed the building as a state-of-the-art, five-star Green Star triumph showcasing the company’s digital future at its opening in 2009. But journalists say it’s so large, with diminishing occupied desks, that staff could erect a display home or granny flat and camp overnight. And swing a few cats.

And what about the purpose-built 3AW studios on the seventh floor with their fabulous view designed to stimulate Neil Mitchell’s synapses each morning? If the station is sold to John Singleton, what happens then? Will Mitchell and co rent the space, or will it be vacated to allow more display homes and granny flats? The way things are going, the company should have set up humpies on the site.

In other disturbing news, Sean O’Connor, one of the paper’s “deputy editors” has gone on leave, apparently peeved that Mike van Niekerk was appointed over the top of him as Monday-to-Friday editor. So many editors, so few subs … — Andrew Crook

Bolt’s Obama spray gets weird. Andrew Bolt might want to be a bit more careful about where he links to from his much-read blog. Yesterday, in a predictable spray at Barack Obama over the alleged connection between intelligence obtained by waterboarding and Osama bin Laden — a claim already discredited well before Bolt wrote his piece — he also referred to claims that Obama had opposed the mission to kill bin Laden and somehow been overruled (yes, overruled) by Hillary Clinton and Leon Panetta.

What was the source for this astonishing claim that, if true, would surely forever discredit the Obama presidency? As blogger/tweeter Cosmic Jester quickly pointed out, it was the blog of a conspiracy theorist on the Socyberty website, which details the presence of aliens on earth, including, apparently, shape-shifting reptilian aliens called the Anunnaki. To support such high-quality geopolitical analysis, the site runs an array of lurid ads. Clicking on the link provided by Bolt will today take you to a page where the “ads selected for you by a sponsor”  include “Secrets of Women’s Clitoris” (just the one, apparently) and “Girls Love Anal S-x”.

Vic rock lobby defends diminishing returns. Crikey‘s story on Wednesday highlighting the 56% real reduction in rock and roll funding in Tuesday’s state budget has ignited a firestorm inside the sector with legal letters flying and peak bodies scrambling to defend their lobbying prowess.

Over on the fabled Mess + Noise discussion boards, an anonymous Music Victoria spokesperson posted a curious defence after commenters took it to task over a positive press release highlighting its $500,000 in Baillieu government funding. But not only had Music Victoria been denied an extra $250,000 promised by Labor, popular Victoria Rocks programs like the $2.4 million FReeZA Central commitment and $1.3 million in Music Equipment grants had disappeared. Instead, the government had simply recommitted to a bare bones sum of $2.6 million for Victoria Rocks over three years, which chafes badly with the $7.1 million deal struck in 2007 under the previous government.

To add insult to injury, before losing his majority last November Labor had offered rockers a monster $24.7 million package at least partly to sandbag inner-city seats on the verge of falling to the Greens. Take that into account and the leather jacket set is a massive 87% worse off than it otherwise would have been.

The action yesterday was on rock and metal site Tone Deaf, which posted a follow-up yarn relaying the sad news and suggesting lobbyists were left stranded far from home when Ted Baillieu snagged his lower house majority. “The question can now be asked — has the inability of publicly funded representatives of the music community to remain non-partisan in politics f-cked the people they were supposed to represent?,” it thundered.

The observation prompted an angry exchange of emails between a lawyer representing Music Victoria, Fair Go 4 Live Music and the SLAM Rally, which accused it of “Fox style accusations” resulting in this “Right of Response” this morning. But rock identities contacted by Crikey say the vitriol might be better directed towards the government before the scene becomes — as the Cosmic Psychos once opined — a lost cause. — Andrew Crook

Barry’s book the best of business. Before BBC-turned-ABC-turned-Seven-turned-Sydney Morning Herald-turned ABC-turned-Crikey journalist Paul Barry joined us here in the bunker he wrote a very good unauthorised biography on James Packer called Who Wants to be a Billionaire?. Packer, not surprisingly, didn’t like it very much. But last night, from 25 entries and four shortlisted books, Barry was named the winner of Blake Dawson’s annual prize for business literature.

Judges called the book “carefully written and thoroughly researched”, “a lively and very readable book with a strong narrative”. Finalists included Bridget Griffen-Foley’s Changing Stations: The Story of Australian Commercial Radio, Under Corporate Skies: A Struggle Between People, Place and Profit by Martin Brueckner and Dyann Ross, and Salts and Suitsfrom Phil Jarratt.

Barry was pretty excited this morning (though that might have something to do with the $30,000 prize): “I’m really thrilled to win. Who Wants to be a Billionaire? was attacked by some of James Packer’s friends and slagged off by a couple of reviewers. So it’s great to have an independent panel of judges rate it so highly. It’s nice to be vindicated.” — Jason Whittaker

Guido Fawkes’ shameless whisky freebie. The art of the freebie plug is a hallowed one, but subtle. Drop in a casual reference to a product and have a box of it delivered to your door. What can go wrong? Well, you can do it so explicitly that the brand looks cheap and desperate, and your readers feel used. Here’s UK Toryboys scandal site Guido Fawkes (order-order.com), from their twitter feed (I’ve x-ed out the brand): 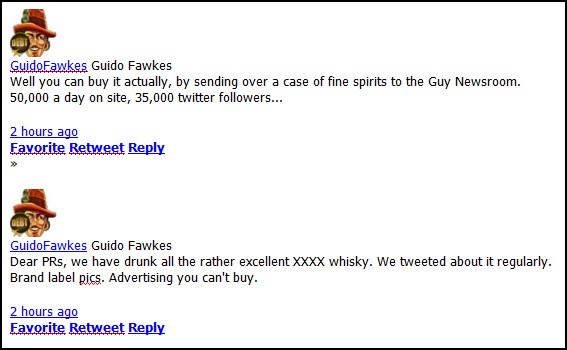 Possibly written while finishing said case. Maybe a few plugs for Berocca will now be in order-order. — Kim Serca

Front page of the day. The UK’s Daily Star is an unapologetic tabloid. But today it hit tabloid gold with this memorable front page … The Department of Corrections. A new segment for Crikey‘s Media Briefs: each day we’ll trawl the world’s newspapers and choose a selection of outstanding corrections. From today’s International Herald Tribune: “We can’t blame them for thinking Clinton was doing something noteworthy, but it turns out, she was just coughing. ‘I am somewhat sheepishly concerned that it was my preventing one of my early spring allergic coughs,’ she told the AP. ‘So, it may have no great meaning whatsoever’.” — Mediabistro

“So, as users play the games, they may be presented with an offer for a certain number of Facebook credits if they sit through a video ad for Windows Phone 7 (for instance). Those credits can then be redeemed for items in other Facebook apps. Right now, Credits are optional, but this summer Facebook is requiring all games to use Credits for selling virtual goods in games.” — Business Insider

“Judy McGrath, chairman-CEO of MTV Networks and a 30-year veteran of MTV, is leaving the company effective today, she said in a statement released by MTV parent Viacom. No successor will be named; all the division heads will begin reporting directly to Viacom president-CEO Phillippe Dauman.” — AdAge

Yes, but ….. does anyone have a picture of Andrew Dolt and an Anunnaki together?

“each day we’ll trawl the world’s newspapers and choose a selection of outstanding corrections”
No worries Crikey, as long as do the same with your corrections and typos…there’s been a few lately

Klewso, I’ve seen a picture of two Andrew Dolts together, I reckon we should save the Anunnaki one & get rid of the other.

@pete: I shouldn’t (and I’m the worst typist round here) but you’re missing a ‘you’ between ‘as long as’ and ‘do’…