Missing from the government's 96-page report into mining in the WPA is discussion of a potential windfall or special dividend for the original pre-1947 residents of the area, writes Luke Miller.

In 1947, the Australian government, making “provision for the defence of Australia and the British Empire”, unapologetically alienated, by its own estimates, 3760 nomadic Aboriginal people from their land in Central Australia to create the weapons testing facility known today as the Woomera Prohibited Area (WPA). Now the Australian government, the South Australian state government and various companies are set reap to a trillion dollar windfall after it was announced this week that miners would be allowed to “time-share” the area with Defence.

South Australian Premier Mike Rann lauded the new deal as “a guarantee of wealth for the future”, tweeting the extractable mineral wealth was worth “at least $35 billion” as the “area has 62% of nation’s copper and 78% of uranium deposits”.

While Rann limited his estimate of the mineral value of Woomera to $35 billion, other interested parties have thrown about much larger figures. South Australia Chamber of Mines and Energy chief executive Jason Kuchel told the Herald Sun the WPA “contained $35 billion worth of known deposits but its total mineral wealth had been estimated at more than $1 trillion”.

Missing from the government’s 96-page report into mining in the WPA is any discussion of a potential windfall or special dividend for the original pre-1947 residents of the area, stating only that indigenous groups will “continue to operate under current access arrangements … unless they choose to be administered under the proposed coexistence model”. Presumably, this will be a mishmash of the Defence Act (1903) and Defence Force Regulations (1952) and the Native Title Act, all three of which are designed to limit and restrict Aboriginal access to land they once unconditionally owned.

In its most crass form, if those 3960 people (or their children) had been able to inherit those mineral rights, each of them would now been looking at a $265,957,446 windfall per person. But while, for example, mining magnate Gina Rinehart was allowed to inherit billion dollar iron ore leases in the Pilbara from her white father, Aboriginal people in the region of Woomera will most likely be restricted to a package of negotiated scraps available to them under the Native Title Act.

Indeed, the two main Aboriginal respondents to the public submission period on the “Review of the Woomera Prohibited Area” that led to the new rules were both Native Title bodies. One, from the Antakirinja Matu-Yankunytjatjara Aboriginal Corporation, was broadly supportive of allowing miners into the WPA, stating “the claim group if it had to choose between defence and mining activities would as a preference choose mining, purely based on the tangible benefits …”.

The other group, the Kokatha Uwankara Native Title Claim Group, were much more critical, stating that a previous plan in place with the government had “not been followed and has been largely ignored by Defence …” and that “any proposal to open the areas of the WPA up to future mining and exploration are of great concern … traditional owners will not permit any damage to such sites of significance”.

When the land was original confiscated by the Commonwealth back in 1947, there was so much public concern about the poor treatment of the Aborigines in the area that the government was forced to address the concerns of Australia’s nascent civil rights movement.

When Doris Blackburn, a socialist MP and the second woman elected to the House of Representatives, moved a motion opposing the proposed testing range as “an act of injustice to a weaker people who have no voice in the ordering of their own lives”, John Dedman, the Minister for Defence, invoked the higher calling of international co-operation and world peace. He claimed that “anything that can be done to prevent harm coming to (the Aborigines) will be done”.

When Blackburn drolly interjected “We have writings to that effect dated as long ago as 1840”, Dedman took offence, protesting that he did “not agree that her concern is greater” than his own.

Considering that the land was only taken over by the government for the “higher purpose” of defence as recently as 1947,  this large transfer of wealth, without compensation, shows that the rights of its Aboriginal citizens are still literally second-class to other interests.

As Doris Black said in 1947 to the Australian parliament, “…when it suits us to use fine and fair words about trusteeship we do so; but we do not consider ourselves to be bound by those words when matters which, we think, are of greater interest take pride of place.” 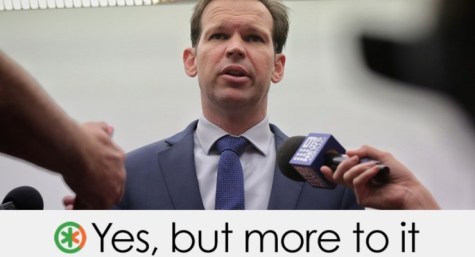 Does mining really employ more Indigenous people than any other industry?

Is the Yindjibarndi native title deal from FMG up to scratch?

Indeed, Stephen Martin, but another fundamental problem with this piece is that it completely ignores the stake rightfully conferred by the risk and skill involved in actually finding the minerals. It’s long past time that the trivialising of the discovery and development of mineral resources as ‘windfall’ ended. Its distorting effects are very clearly demonstrated here.

Could somebody explain to me why any section of the Australian community not responsible for the actual exploration and discovery of mineral resources has any greater rights than any other section of the Australian community. Whether we like it or not mineral resources are reserved to the Crown, and so-called landowners have no rights to the benefit of the minerals themselves. There are land owners in the Latrobe Valley who are struggling with the problem of the mineral rights to the coal under their land, and I understand they have no redress at law other than compensation for the alienation of their land should it be compulsorily acquired for its mineral resources.

Whatever the issues of so-called dispossession of original people from the area used for testing purposes, I would see these issues is entirely separate. Gina Reinhard’s wealth is a direct consequence of the exploration activities undertaken by her fatherand her inheritance has nothing to do with native title or any other issue other than the direct inheritance by her in accordance with Australian law.

According to my understanding of the legal situation, the nomadic occupants of this area had no greater right to inherit mineral wealth than any other Australian, and I would be happy to be enlightened otherwise.

@ Greg Angelo, as I understand it mineral royalties in the NT are paid to the indigenous owners of land acquired through the Native Title Act. And I think that the law regarding minerals rights in Western Australia are different to the situation that applies in Victoria and the other eastern states.

In its most crass form, if those 3960 people (or their children) had been able to inherit those mineral rights, each of them would now been looking at a $265,957,446 windfall per person.

This figure does not seem to take into account the minor problem that, were it not for “the white man”, there wouldn’t be any mineral wealth at all because none of the “traditional owners” would even know it was there, let alone have the ability to extract it.