A Green welcome for Labor refugees

The Greens should be preparing to receive the next lot of refugees from Labor.

A Green welcome for Labor refugees. The Greens should be preparing to receive the next lot of refugees from Labor. The cave-in by the Gillard Government on offshore detention centres for asylum seekers will further disillusion many Labor voters. Julia Gillard is beginning to look more and more like John Howard in a dress.

Australia on the interest rate scale. The European Central Bank decided overnight to leave the official eurozone interest rate unchanged at 1.25%. Similarly the Bank of England left rates at their historic low of 0.5% for the 27th month. How Australia’s rate – also left unchanged this week but at 4.75% — fits into the world picture is shown below: 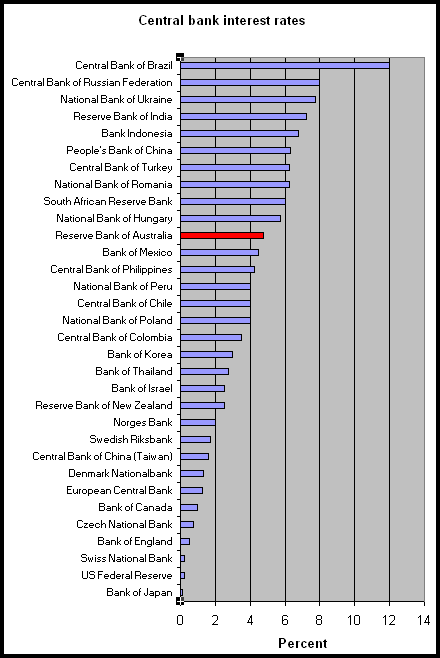 A little inflationary relief. A little relief overnight from inflationary pressures with crude oil prices falling quite sharply. Having reached as high as $US126 a barrel last month, Brent crude is now down to around $110. Taking a name in vain. From NPR:

Calling it “a grievous insult,” a great grandson of Apache Chief Geronimo today asked President Obama or Defense Secretary Robert Gates to apologize for the military’s use of the codename Geronimo during the raid that ended with al-Qaeda leader Osama bin Laden’s death.

Harlyn Geronimo, an Army veteran who served two tours in Vietnam, also asked in a statement submitted to the Senate Committee on Indian Affairs that “this use of the name Geronimo” be expunged “from all the records of the U.S. government … leaving only for history the fact this insult to Native Americans occurred in all its pity.” Back where he belongs. The Governor is returning to where he belongs for a reported humble sign-on fee of $12.5 million with 25% of the box office gross to come. Arnold Schwarzenegger is to star in a film, Cry Macho, based on the 1975 novel by the late N. Richard Nash — The Rainmaker:

A new Terminator movie is yet to have the script written but will not be far away. No doubt solving the problems of an evil world will prove easier than trying to run California.

Arnold Schwarzenegger and the politics of a Hollywood comeback

Post-Governator, Arnold Schwarzenegger returns to his first starring role in almost a decade in The Last Stand, writes Luke Buckmaster. In this new era of Arnie, how does the film represent his values as a politician?

Same same but different? Erwin Jackson from The Climate Institute asks some questions about California's carbon price, set to start in January, and compares it to Australia's scheme.

I thought, yesterday, considering the genocide and white supremacy Geronimo and his tribe endured, that inciting his name, in this act of “the ultimate solution” for bin Laden was a bit more than tasteless irony – “thought up” by (a) whom?