Prime Minister Gillard had dinner with some business people last night. Gillard wanted to sit opposite "select business people" over the dining room table at Kirribilli House to canvass their views on her carbon price plan.

The AFR headlined the meeting with “Gillard feeds business split on carbon.” The strange thing about the media coverage around this issue is the suggestion that business would not be split on this issue — after all, “business” and “business leaders” are not a homogeneous blob, they represent countless points of view and vested interests. Their positions on any kind of carbon price are qualified and in most cases, don’t easily fit into a pro/anti column. It’s just that some of them have much louder voices. For their troubles, the louder ones are badged by the media as speaking on behalf of “business”, which at the very least leaves the reader with a very distorted view.

Here are some “select business people” being papped outside Kirribilli House: 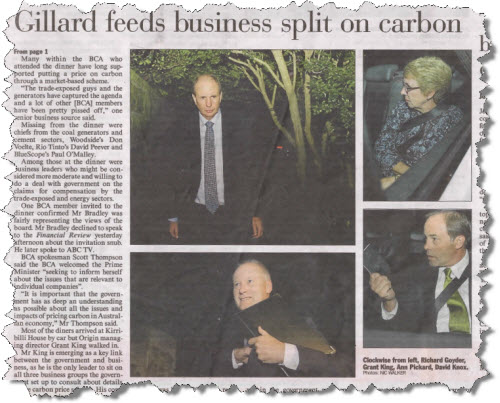 As Bernard Keane explains in Crikey today, part of the problem is that the government has created an impossible paradigm for itself: “somehow Labor has, with its uncanny knack of letting its opponents pick the battlefield, established a test for itself: does big business back its carbon price?”

The other half of the story is the role of the media, and its simplistic portrayal of a nuanced, complex issue. That, and getting it flat wrong. Take Gail Kelly. Yesterday the CEO unveiled a $3.17 billion first half-cash profit for Westpac Banking Corp. She also said a few things about a carbon price. Here’s the front page report from The Australian today:

On Radio National Breakfast this morning, host Fran Kelly asked the Westpac CEO about the story:

Gail Kelly: Fran, that headline is just straight out wrong. Really fundamentally wrong and quite annoying, actually, to see a headline like that. Our position, with regard to carbon, has been consistent and been a long held position by the Westpac Group. And it’s a position that says it’s important, within Australia, that we actually deal to carbon and seek to overall reduce our emissions. We’ve been an advocate of an ETS, a trading scheme, for some period of time. Because we think it’s the best way in which you can actually drive innovation and drive the necessary changes that are required here. And a carbon price is one step in that direction. Clearly, what businesses are needing in certainty. And so our encouragement to the government, our encouragement to Julia Gillard is to consult, consult widely and provide as much certainty as early as possible.

Fran Kelly: We know we’re not going to get certainty in terms of the details, the carbon price until July now. The Prime Minister announced that yesterday.

Gail Kelly: Well, that’s good to hear. I mean at least what we have now is a date and a framework, therefore, that our customers can start to think about. So that’s really what we’ve been calling for. But our underlying position hasn’t changed at all.

Fran Kelly: Yes to a price on carbon.

Gail Kelly: Correct. It’s a necessary step on the way towards an ETS. Now, it’s the only situation that needs to get tackled. We need an overall carbon plan within our economy. But an ETS is a very important component of that.

Here’s The Oz‘s take on that interview, as of midday. The government is, to say the least, up against it.

How the deficit was blown: the Coalition’s $100 billion bill

“Where’s Rupert”? How can it reflect “business (as usual)” otherwise?

And, surely, you deserve one of those “badges” if your sentiments echo those of the particular “media barren” presenting that news?

I read the Australian, but nothing would cause me greater pleasure than to see it go out of business. It’s circulation is 130,000 and dropping. Their bias is such that they won’t publish dissenting comments on their website, let alone in the printed newspaper.

Just another example of that “(perception of fitness to govern) agenda” of theirs?

Chris Mitchell, editor-in-chief of the activist BrownRight Daily, rejects the accusation that during his tenure the paper has become a relentless, partisan, anti-science clown show. He notes that Fairfax and the ABC are struggling to bolt, bolt, bolt…

The Oz’s take on your editorial: