The Victorian rock and roll community is reeling in the wake of yesterday's state budget, which saw funding for the contemporary music sector slashed by 56% and the popular FReeZACentral program abandoned.

The Victorian rock and roll community is reeling in the wake of yesterday’s state budget, which saw funding for the contemporary music sector slashed by 56% and the popular FReeZACentral program abandoned.

Despite trumpeting half-a-million dollars in new funding over two years to peak body Music Victoria in its official press release, detail buried in the budget reveals struggling rockers will have to make do with an annual shortfall of $775,000 compared to the $7.1 million spent by the previous government under funding arm Victoria Rocks.

The 7-year-old $2.4 million FReeZACentral program — which offers training workshops and rock star mentoring for struggling jobseekers — will wind up on June 30. And $1.3 million in popular music equipment grants, that allowed a “bank” of musical equipment to be hired by aspiring under-26 rock pigs, was also junked.

Instead, a bare-bones Victoria Rocks program will be maintained by the Baillieu government over the next three years with funding of just $2.6 million.

Push General Manager Peter Chellew, who oversees FReeZACentral and also serves on the board of Music Victoria, told Crikey he was “bitterly disappointed” and would be demanding a meeting with Youth Affairs Minister Ryan Smith in the next few days to find another way forward.

“On behalf of the music community we’re extremely disappointed that FReeZACentral is not going to be continued. It’ s been a fantastic and effective program in getting people jobs,” Chellew said.

He said the program has pushed over 3500 young people through training and a further 300 had received one-to-one mentoring from stars like Clare Bowditch.

Well-regarded ex-Age scribe turned Music Victoria CEO Patrick Donovan told Crikey that while he was pleased the seed money for his fledgling organisation was continuing, the government’s overall approach was based on a “very different economic philosophy” emphasising self-sustainability.

“The message I’ve got from the Coalition is they think organisations such as ours should be self-sufficient,” he said. “It’s really like comparing apples with oranges.”

Budget papers show that a fourth year of funding worth $250,000 promised under the previous government has evaporated, with Donovan expected to pay his own way through subscription fees and grant revenue by 2013.

Music industry sources have argued that yesterday’s Liberal commitment represents an 87% reduction in funding compared to what was on the table under the previous administration.

One irate former Victoria Rocks insider was scathing at yesterday’s numbers: “Last February I saw Liberal members holding up signs declaring their love of live music even though they had never committed to a contemporary music policy as part of their election platform. I hope that Victoria’s Rock ‘n’ Roll community holds the government accountable for this, as it would be a shame to see our musos slip on a pair of blue undies and jump into bed with Ted.”

As the Victorian election campaign entered its final days last November, John Brumby splashed hard on a rock package, spruiking a record $24.7 million contemporary music policy to woo inner-city voters thinking of defecting to the Greens. FReeZA funding was maintained and Victoria Rocks was extended by another four years. Brumby was apparently so keen to court the leather jacket set that a version of the Kinks classic Victoria was considered for his official re-election theme song.

The Liberal Party also appears to be an even more recent convert to the cause.

Protesters at the historic SLAM rally last year, when 20,000 fans rebelled against liquor licensing laws that wrongly equated music with violence, were surprised when they were greeted by besuited MPs holding “Liberals Love Live Music” placards on the steps of Parliament House. But in a subsequent interview given to Inpress magazine, Ted Baillieu media spokesman Simon Troeth needed to be reminded what Victoria Rocks was. 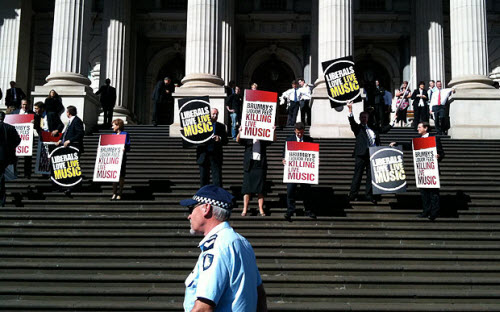 SLAM organiser Helen Marcou told Crikey the struggling local music scene, in which aspiring rock stars are forced to live on as little as $11,000 a year, would be “further squeezed” by yesterday’s budget.

“The Liberals had promised they’d protect the industry but we had suspicions about their overall agenda. It appears these suspicions have been realised,” she said. Marcou noted the government was yet to make good on an election promise to change the object of the Liquor Licensing Act to protect the industry.

Artists including Dan Sultan — last seen sporting an impressive Aboriginal flag singlet and Southern Cross board shorts combo at the recent Boogie festival in Tallarook — WA expats The Drones and Dan Kelly have all benefited from the grants over the last decade.

A spokesperson for Smith, who oversees the FReeZa components of Victoria Rocks under his Office for Youth, did not respond to Crikey‘s queries before deadline.

The suburbs where you have to vote to have a drink

The cultural revolution was online in 2010