Sacked bishop speaks out: Pope made a mistake, controls with fear

Australian Bishop William Morris says Pope Benedict XVI has "made a mistake" in forcing him to resign as Bishop of the diocese of Toowoomba. And there are questions about his role in speaking up for s-x-abuse victims, writes Amanda Gearing.

Australian Bishop William Morris says Pope Benedict XVI has “made a mistake” in forcing him to resign as Bishop of the diocese of Toowoomba.

On his last day at the office yesterday the bishop spent his time in back-to-back media interviews explaining his heartbreak that the Vatican, in his opinion, is wrong, is controlling bishops by fear, and failing to hear people.

“The Pope is only infallible when speaking as head of the church in areas of faith and morals … He can make mistakes … I think he has made a mistake,” he said yesterday.

Bishop Morris explained the reasons for his disillusionment with Rome, using a reference to Shakespeare’s Hamlet: “I think Rome has lost its ears and it’s not listening, it’s not listening. And I think there’s a fear there that as it tightens down it’s not allowing voices to be heard.

Bishop Morris’ experience has strengthened his sympathies for people who are voiceless, including victims of clergy abuse. His mettle was tested when 13 girls aged nine and 10 were r-ped by a Catholic school teacher in his diocese in 2007 and 2008. Bishop Morris fought with Rome on their behalf and admits his advocacy did not make him any friends but he would not speak about that further unless the tape recorder was turned off.

Instead, he quoted from his press release, saying between the lines, that this may have been a factor in his demise.

“It has been my experience and the experience of others that Rome controls bishops by fear and if you ask questions or speak openly on subjects that Rome declares closed or does not wish to be discussed, you are censored very quickly, told your leadership is defective, that you are being unfaithful to the Magisterium, that you have broken communio and are threatened with dismissal,” he said.

“On one occasion when I was fighting for my community in a particular area I was told if I didn’t toe the line they would put the CDF onto me … the inquisition.”

Catholics on the streets of Toowoomba were still in shock yesterday at the ousting of the bishop but were openly critical of Rome and declared their support for the bishop. Hundreds of phone calls and emails of support poured into the bishop’s office.

“It’s quite stunning,” bishop Morris said. “It’s not only local. It’s national and it’s international which is very humbling really.”

The 30 active priests in the diocese who had been considering resigning en masse would not proceed, the bishop has claimed.

“They won’t do it,” he said. “Their sense of church and their sense of service and their responsibility is bigger than that. They were saying it because of the pain they are feeling.”

Underneath the humbling public endorsement and the solidarity of his priests, the bishop is deeply sad. “I love the church and I don’t think what’s happening to me is good for the church. I don’t think it’s good at all,” he said.

“I am disappointed and I’m sad for the church because the church is at its best when the gospel is expressed in the love and the justice of what the message of Christ is on about. And I think that’s lacking here, in the context of the way that there has been no process, the way the facts haven’t been able to be looked at from both sides and the way there’s been no way of doing that.”

During five years of negotiation with Rome, in a bid to break the impasse, Pope Benedict offered bishop Morris a “national job” but bishop Morris rejected it. “I was fighting for justice at that stage, I was fighting to find out why they were misinterpreting my words and why am I in this particular position,” he said.

Bishop Morris also defended himself against detractors who claim his administrative failure to replace ageing clergy with new vocations has driven him to resort to considering ordaining women and married men to make up the shortfall. The diocese has ordained four new clergy in the past 10 years and will ordain another this year, which he sees as a better result than has occurred in many country dioceses that have not ordained any new priests in that time.

He also counters complaints that he is trying to “laicise” the ministry saying his true aim is to “call forth” the baptismal gifts of ordinary Catholics to assist with ministering to the people.

Bishop Morris is determined that his forced early retirement will not silence him: “I won’t go off to the corner. I will speak on behalf of people wherever I am. I am still a priest and a bishop of this diocese.”

Sydney Anglicans frosty with the Pope 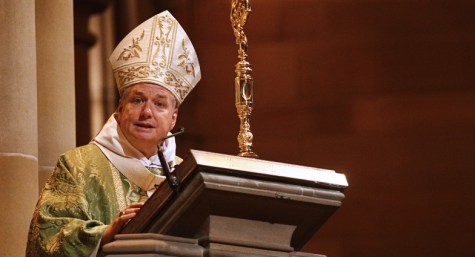 Crucifixion is not an unknown concept within the church. Seems as though Rome likes to weed out the good blokes while protecting the pervs.

“the Vatican, in his opinion, is wrong, is controlling bishops by fear, and failing to hear people”

Catholics are programmed by ludicrous dogma, what’s he expect?

Not all of us Catholics are programmed by ludicrous dogma Michael Harvey, such a generalisation is rubbish. You are obviously sh-t stirring or have a personal problem with the Church, sort it out privately.

David I’m not the one you should be trying to intimidate. Luckily I’m not superstitious. But I pay a subscription to Crikey not the Catholic Weekly.

If the good bishop is going to be a leader in the Catholic Church, he needs to … well, be Catholic. And in Catholicism, we follow the teaching of Christ as revealed to the Apostles and interpreted by Holy Spirit working through the teaching office of the church led by the pope. If the pope discerns, as he has, though Holy Spirit, that women are not to be ordained, and that this is definitive, Catholic bishops (and indeed all Catholics) need to accept this as part of the faith. Jesus didn’t come to negotiate with his people, or to listen to and implement what people thought was right, he came to teach the truth, and then to commission the Catholic Church to do the same, and so we have done to the present day. Truth cannot be determined by popular vote, so this stuff about “I think Rome has lost its ears and it’s not listening, it’s not listening” is nonsense — it’s as if we tried to determine by popular vote whether slavery was OK or whether Jesus rose from the dead.

He says, “The Pope is only infallible when speaking as head of the church in areas of faith and morals … He can make mistakes” — but he has spoken infallibly on this matter of women’s ordination (a matter of faith); the document is Ordinatio Sacerdotalis (also see Responsum ad Dubium).

He can rail and fulminate all he wants, but he’s just being rebellious and doing everything he claims he’s not doing (breaking communion, being unfaithful to the Magisterium (teaching office), being a defective Catholic leader). He deserves to be removed since he’s not upholding the Catholic faith. You’d expect that of any organization that has standards and rules: If leaders break them, they lose their position. Wouldn’t that happen in any corporation?

I think all of this stems from people that want to imitate the world rather that taking a truly Christ-centered perspective on this question. The truth is based on what Jesus taught, not what the latest Gallup poll thinks.