In today's Media Briefs: Meakin and Seven: ‘till death do they part ... Journal trumpets rise, but papers in decline ... A subeditor's value ... Headline of the Day ... and more ...

Meakin and Seven: ‘till death do they part. Rumours of veteran news boss Peter Meakin’s promotion at Seven are greatly exaggerated. “Total frog shit,” the straight-shooting boss told Crikey yesterday of talk he’d be in charge of all network programming to make way for Brisbane news director Rob Raschke.

The rumour went that Meakin would be appointed head of television, with rising star Raschke to shift south to head up news operations. And it wasn’t just Crikey hearing the scuttlebutt: Meakin even received a congratulatory text message from someone at the Nine Network. “I guess they would like to see me as head of television because it might make them more competitive,” he said, describing any move to put him in charge of the network as a “stupid appointment”.

Raschke is very much on the radar of Seven executives, but according to Meakin: “I’ve got no doubt he has a considerable future in this business but he hasn’t been promised my job.” After eight years leading Seven’s surging Martin Place news HQ, and decades at Nine, he’s going nowhere. “As long as they want me around,” he said. “Until the coffin arrives I’m here.” — Jason Whittaker

Journal trumpets rise, but papers in decline. There was the usual crowing from News Corporation overnight over The Wall Street Journal remaining the No.1 newspaper in the US. But was it?

Gannett Co’s USA Today was the second biggest selling newspaper, including those digital sales. It’s sales were basically flat with a 0.1% increase to 1,829,022. But these figures show that without those digital copies, the Journal’s print circulation was actually 1,613,062, making it second to USA Today. Comparing the actual print sales in the two half-year periods, we find the Journal‘s sales in the March 2011 half fell by around 3.8%, or 65,000 copies a day to 1.613 million from 1.678 million. We’ll see if News has been able to translate that success into higher ad revenues when its owner reports its March quarter results tonight.

US Newspaper Association figures show that the country’s newspapers have seen total ad revenues fall from just over $US47.8 billion in 2005 to around $US22.8 billion in 2010. The US newspaper industry is in a more advanced state of decline than Australia’s. But the announcement yesterday from Fairfax Media tells us, we are heading towards the same cliff where several American papers are struggling to avoid.

News Corp’s quarterly profit statement tomorrow morning, our time, will gloss over the problems in its papers by using the benefit of the fall in the value of the US dollar against the Australian dollar and the British pound. The thing to look for is any comment and figures showing the performance of News International in London and News Ltd in Australia in local currencies. — Glenn Dyer

A subeditor’s value. Irony: page 19 of the Daily Telegraph today. Story of sub outsourcing (albeit at Fairfax) running beneath a Reserve Bank story, quoting ComSec’s “James Craig”. Errrr, that would be Craig James. 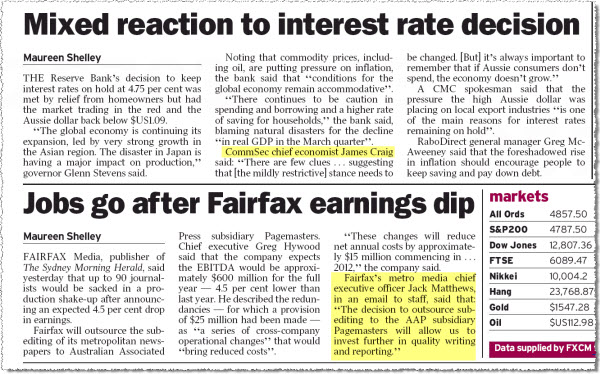 Thank God the Tele subs are on the ball, else they would follow Fairfax down the Pagemasters’ path. — Crikey reader Terry Towelling

Headline of the Day. NY Post spares no sympathy for the death of Osama bin Laden in its edition today: 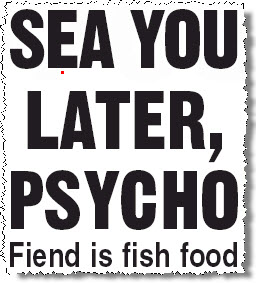 A day of Osama/Obama confusion

“Modern media works at lightning speed, especially social media such as Twitter. Which may explain the grimly amusing raft of spelling mistakes confusing Osama (bin Laden) and (Barack) Obama. The conflation of the terrorist chief with the American president by a Fox station in California may have struck many as not a coincidence given Fox News’s openly critical stance of Obama.” — The Guardian

ABC defence on not jump-broadcasting the Obama’s speech

“The ABC has defended its decision not to break into normal programming on ABC1 to report the news of Osama bin Laden’s death on Monday, saying the news was available to the public on its new digital channel ABC News 24.” — The Australian

The creepy age of social networking: how about a kiss?

“Tactile communications: it may not sound too exciting, but it’s precisely the field of research that produced a device which lets users ‘transmit the feeling of a kiss’ long-distance.” — Mashable

TV at war on Tuesday night

Google knows so much about you but how much do you know about Google?

“As of April, when Larry Page took over as CEO of the company, the search group was renamed the ‘knowledge group’ internally. Google confirms the change. And, they point out, it was actually publicly announced in an SEC filing made on April 11. Nobody seems to have noticed that someone was named the SVP of a Google product group that previously hadn’t existed.” — TechCrunch

I am a 26 years old nurses,young and beautiful.and now I am seeking a good man who can give me real love , so i got a username Anna2002 on–Ag’eMingle. C’○’M’–.a nice club for y’ounger women and old’er men, or older women and y’ounger men, to int’eract with each other. Maybe you wanna ch’eck it out or tell your friends.