The bigger story: Logies or Osama? Should we be surprised that Channel Nine’s A Current Affair led with the Logies last night and failed to run a story about Osama bin Laden? After all, Nine’s Karl Stefanovic did take home the “coveted” Gold Logie… 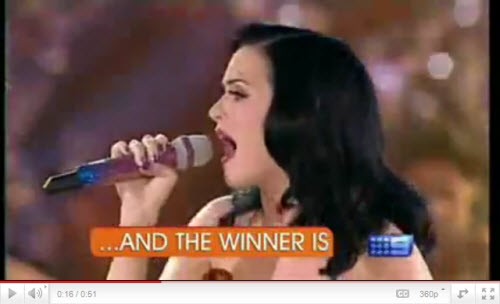 Meanwhile, over at Seven, Today Tonight at least realised the significance of bin Laden’s death: 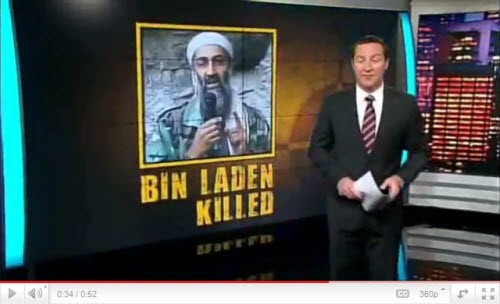 Who got him? Melbourne’s newspapers seem confused about just who got Osama bin Laden in Pakistan yesterday… 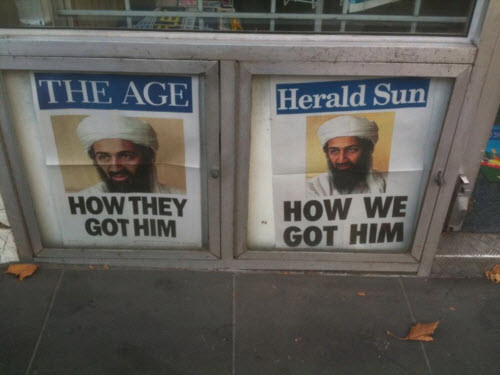 — Flashboard Wars: The Age vs The Herald Sun

September 11, 2011. We’d be surprised if it’s only the Ballarat Courier making this mistake in the coming days… 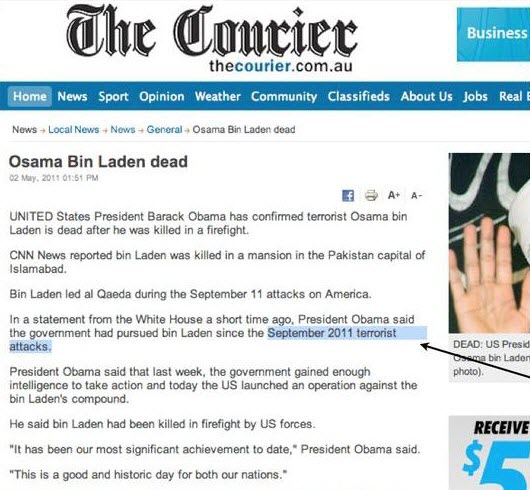 Google’s Osama bingle. A Crikey reader dropped this in our laps this morning:

“I thought you might be interested in the attached screenshot I took of Google News page from 6pm Monday night which uses a picture of Lara Bingle against a story relating to Osama bin Laden. Does the question need asking, are we giving safe haven to the next world’s most wanted terrorist’?” 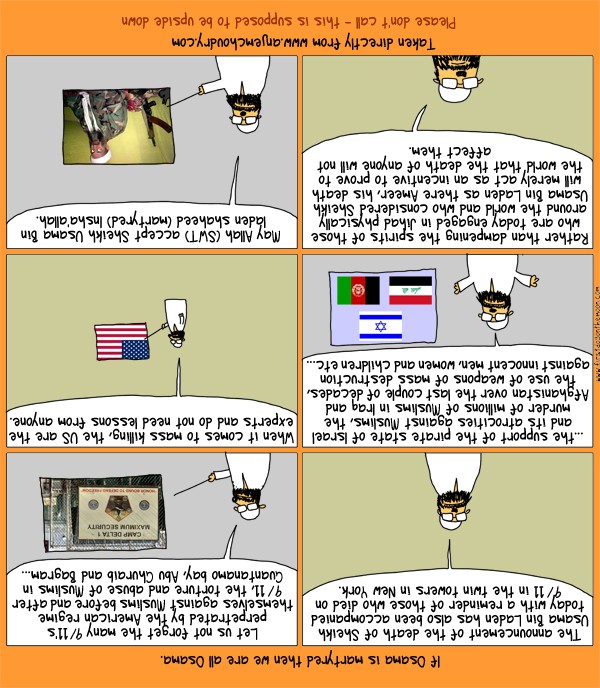 Spot the difference. Monday’s Age had two versions published, likely due to this mysterious snake metaphor being changed. It doesn’t adder up and questions must be asped: 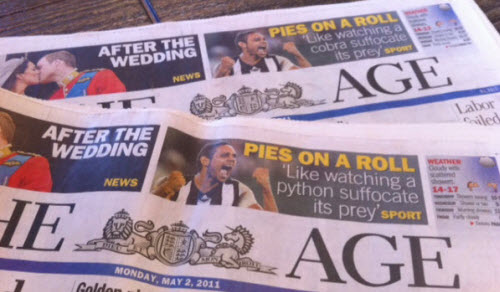 Legend departs Herald Sun. One of the true legends of the Herald & Weekly Times has resigned after almost 40 years with the company and 47 years in journalism. Geoff Easdown, widely known among ageing hacks as “Ease-up”, will leave the Herald Sun at the end of May after a stellar career covering everything from tennis to executions. The 62-year-old became an international celebrity in 1985 when he was attacked by John McEnroe in the foyer of the Sofitel after the stolid scribe hurled a few unsolicited (and curly) questions at the controversial tennis brat. Easdown, then at The Herald, made international headlines when a photo of him strewn over a sofa in front of an irate McEnroe was wired to newspapers around the globe.

Said one close associate: “Ryan O’Neal, Tatum’s father, announced that she was pregnant and so ‘EaseUp’ apparently said to the duo who were sitting in the foyer, ‘what about a picture of the happy couple?’. McEnroe told him to ‘get the hell out of the foyer, this is a private matter’ and EaseUp barked back with a retort along the lines of ‘this is a public foyer, I’m not going anywhere’. So McEnroe grabbed him by the shirt and chased him around the foyer and pushed him arse over tit over a chair. He ended up on his back with his little legs in the air.”

EaseUp began on the Riverine Herald as a cadet in 1965 and worked for the Geelong Advertiser and the Launceston Examiner before joining HWT in 1972, where he covered federal parliament, the WA Inc Royal Commission, the Fitzgerald Inquiry and the South Australian State Bank Royal Commission. In Canberra he exposed some big scandals, including a very ugly series of events in the Defence Department in the 1970s.

EaseUp was also among a handful of Aussie journos to cover the Barlow and Chambers hangings in Malaysia and saw the bodies in the morgue while drinking with Barlow’s father after he made his final visit to his son. The image still haunts him today and reaffirmed his opposition to capital punishment.

He authored four books, including a best-seller on the Ansett collapse and was later a motoring writer before moving to his current round of business and aviation. He has told friends that he has been “delighted with his long and interesting career at HWT” and wishes the company and his colleagues well. — Andrew Crook

Mercury will keep its local subs. Mercury staff are celebrating what they see as a huge victory in blocking plans to export subediting jobs offshore. Mercury editor Garry Bailey last night told staff that the sub-editing of the newspaper’s news and sport would continue to be done in Hobart, just as it had for almost 170 years. Bailey had told staff in February that it was likely Mercury news and sport pages would be edited in Melbourne by July.

“It’s a win for the Tasmanian community,” staff spokesman John Lawler said. “The Voice of Tasmania will be edited in Tasmania.” The Media, Entertainment and Arts Alliance said it was a rare victory in a volatile national media scene.

Still, three or four voluntary redundancies will be offered to Mercury subeditors in a reorganisation of the local operation. After hearing in February about the latest plans to edit the paper offshore, Mercury staff wrote to Bailey requesting he join them in opposing News Limited plans to export Tassie jobs. Bailey responded saying he was driving the changes because he believed they were inevitable.

As a result, staff rebelled and mounted a public campaign opposing the plan to edit the Mercury offshore, arguing that it was an attack on the integrity of the paper. The campaign won the support of the Tasmanian government and the Australian Greens, who both wrote to News chief executive John Hartigan asking him to rethink the plans. — Lindsay Tuffin of the Tasmanian Times

The media’s most embarrassing Obama/Osama gaffes

“Politicians and publications have been wrestling with the unfortunate similarities between the names “Obama” and “Osama” since at least 2007. But journalists around the world hadn’t been forced to repeatedly mention both names in the same sentence — until Sunday night, when Obama announced that Osama had been killed. The result was a day full of Osama/Obama gaffes.” — Mashable

“Australia’s Nine Network was among the organisations that uncritically presented the Photoshopped image while failing to note that its provenance was unconfirmed. In a packaged report aired on evening news bulletins across the country last night, Nine’s reporter Denham Hitchcock breathlessly told viewers that the image would be displayed on screen “because of the extraordinary circumstances” — The Spy Report

“That speculation was not aired out on television immediately, but it did erupt on Twitter and other social networking sites. Wishful thinking about bin Laden’s death ricocheted across the Web — and then, at 10.25pm, while Mr. Obama was writing his speech, one particular tweet seemed to confirm it.” — The New York Times

“On Monday evening, TIME’s cover lit up the Nasdaq screen in Times Square in Manhattan. The cover features bin Laden’s face covered by a red “X.” This image has become iconic after its use with Hitler, Saddam Hussein and Abu Musab al-Zarqawi. The bin Laden cover was illustrated by Tim O’Brien, who also designed the cover featuring al-Zarqawi.” — TIME

“Between 10:45 p.m. ET and 12:30 a.m. ET, the company says its users averaged 3440 tweets per second. At its peak, Twitter delivered an average of 12,384,000 tweets per hour. The new numbers offer a glimpse into just how momentous Osama Bin Laden’s demise was. The event surpasses the 3283 tweets sent per second during Japan’s victory over Denmark in the World Cup, and the 4064 tweets sent per second during one of the final moments of this year’s Super Bowl.” — Mashable

“Twitter has acquired TweetDeck, we’ve heard from a source with knowledge of the deal, and the transaction will be announced in the next few days. The $40 million – $50 million purchase price includes both cash and Twitter stock, says our source. — TechCrunch