Finding that Abbottabad was bin Laden’s haven is like finding out that he’d been hiding out in Queanbeyan, writes Shakira Hussein on The Stump.

I spent the surreal weeks following 9/11 in Pakistan, trying to work out how to navigate the new political landscape as everyone proclaimed that the “clash of civilizations” predicted by Samuel Huntington was underway. As a civilizational mongrel, I was not sure whether I was about to get crushed as the civilizations clashed or ripped in two as they moved further and further apart.

Pakistanis were fearful for the future of their own society, but many also believed that the West had become an unsafe place for Muslims to live. People advised against returning to Australia and came up with various suggestions as to how I might establish a life for myself and my young daughter in Pakistan in a society that is a difficult environment for unattached women.

One place was described with particular eloquence by a someone who had grown up there. Abbottabad. Abbottabad was the right place to settle. Excellent schools, a beautiful location, far easier to navigate than any of the major cities would be.  And it was a military town, so very safe. The world was descending into chaos, but Abbottabad would provide shelter from the storm.

At the time, it sounded like a suggestion worth considering. George Bush’s with-us-or-against-us talk of a crusade made me and many others want to duck for cover. In Australia, the post-Tampa election campaign was underway. Perhaps Abbottabad could be my bolthole during the post-9/11 era.

Never did it cross my mind that it might turn put to be bin Laden’s bolthole.

For me, the most disconcerting aspect of today’s news is that it took place not in a remote cave in Afghanistan or the tribal areas of Pakistan, but in Abbottabad – a town in which I never set foot, but whose name continued to register as the suggested safe haven.

I had thought that bin Laden’s death would probably happen in circumstances where it could never be verified. His death is not particularly significant in itself – bin Laden and al-Qaeda itself have long since become more important as concepts than as entities.

But the location and circumstances matter. Abbottabad? 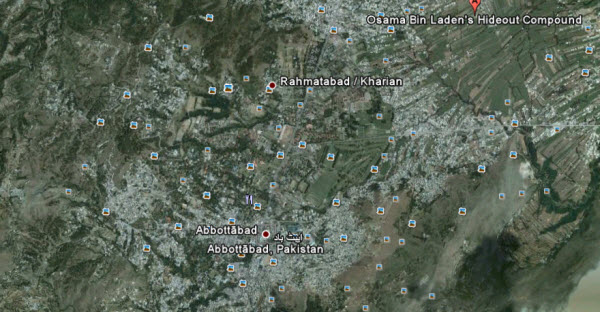 Pakistan’s descent into the maelstrom and Abbottabad’s status as a military town has long since rendered it a target for terrorism rather than a family-friendly backwater. But finding that it was bin Laden’s haven is like finding out that he’d been hiding out in Queanbeyan – if Queanbeyan was a military cantonment that housed ADFA.

How long has he been there? Who is implicated in sheltering him – and in providing the information that led to his death?

The question “what next?” does not arise from the fact of his death but the events surrounding it. The Pakistani government and its military and intelligence services now stand accused of complicity in both the provision of bin Laden’s safe haven and the violation of national sovereignty that led to his death. Such violations of sovereignty were already a political flashpoint in the wake of the release of Raymond Davis, not to mention the deaths of an unknown (and much-debated) number of civilians in US drone attacks in the tribal areas.

What next? I do not rue bin Laden’s death, but I am far from certain that in and of itself, it makes the world a safer place.

*This first appeared on The Stump.