A right royal fawning over Big Willie and Babykins

Crikey sends a very special 21-gun-salute to Australia's newspapers in celebration of their fawning coverage of today's royal wedding.

Crikey sends a very special 21-gun salute to Australia’s newspapers in celebration of their fawning coverage of today’s royal wedding.

Front pages across the country this morning all showed the public what the most important news in the world is right now, with added shiny teeth and curly typography: 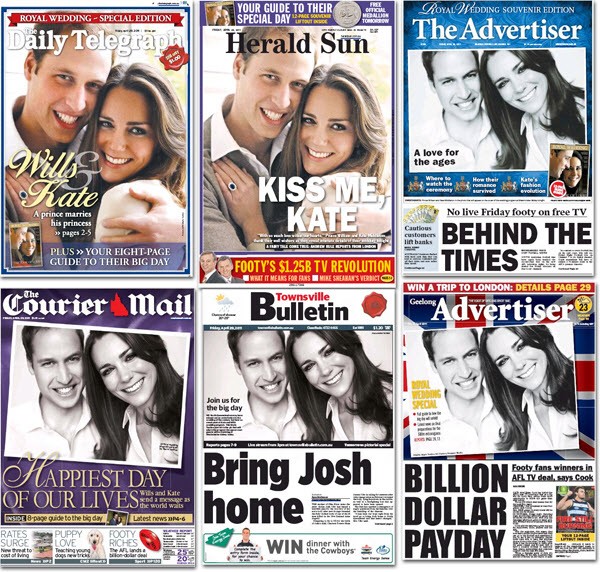 The big News Limited papers contained a glowing 12-page souvenir royal wedding liftout, with the future HRH Catherine of Wales staring adoringly at her beau, cover line announcing “The look of love”. There’s a lot of detail in those 12 pages. Such as, a detailed map of the procession route … … a photoshoot of two Will and Kate lookalikes being wannabe royals and drinking from mugs labelled ‘King’ and ‘Queen’; an in-depth comparison of Kate and Princess Diana; an examination of the couple’s much publicised breakups — titled “how love survived through two splits”; drawings by three Australian designers on how they would dress the bride — “a modern princess — not too traditional”; and the obligatory photo spread of Kate Middleton’s fashion throughout the years — including that damn ugly but now infamous bikini with lace sheath outfit.

And on the back page, a royal wedding quiz, with questions including “How long was the train on Princess Diana’s wedding dress?” and “Which slang word did Camilla Parker Bowles use to describe the engagement of Prince William and Kate Middleton?” (eight metres and “wicked”, for those playing at home).

Over at the Herald Sun, Underbelly golden boy Andrew Rule, poached just this year from The Age, is not immune to wedding fever. From gang wars to fairytales, his latest column wasn’t typical Rule prose:

“It stars a coal miner’s great great grand-daughter who caught the eye of a handsome prince, cracked the code of the caste system and now has the keys to the castle. It’s the old frog-kissing fairytale with a twist: this time the handsome prince kissed the ‘commoner’ and turned her into a princess.”

It only seems fitting that our nation’s newspapers dedicated their editorials to this momentous occasion, and their responses are worthy of a captain’s escort of the household Calvary.

Keep politics out of this big day, pleads Adelaide’s The Advertiser:

“Ultimately the wedding of William and Kate is not a global political phenomenon, but the beginning of what hopefully will be a life-long love story for a young couple who are devoted to each other.”

This wedding is bringing the monarchy back into fashion, notes the Herald Sun‘s editorial:

“In a turnaround to be compared with a company coming back from bankruptcy, The Firm, as the Queen refers to the royal family, is back in business.”

Not that the tabloids were the only guilty parties. The royal wedding will lift the spirits of the world, according to The Australian‘s editorial:

“Many Australians will look to the royals with a strong fealty, grateful for their stability and mindful of the duty they and their antecedents have shown in times of trouble, epitomised by Prince William’s late great grandmother in London during World War II. Those of us who don’t share those loyalties would do best not to mock but just to switch over and watch the footy.”

The Age was careful not to get too carried away with royal carriages and talk of wedding gowns, although its editorial also focused on the wedding:

“Three decades later, in an even more independently minded Australia, it may seem contradictory of a republican newspaper to congratulate the prince and his bride; but we do so with affection, if at a distance.”

Crikey gives a curtsy and nod of respect to The Daily Telegraph and its attempt to put a distinctly local slant on the proceedings in its editorial:

“They both come across as extremely well-mannered, a little shy, and up for a laugh. In other words, they both seem very Australian. A little work on the accents and they’d be perfect.”

Not that they were alone in searching for a shameless Aussie angle. The Courier Mail celebrated its own golden couple, Nudgee lovebirds Joyce and Vince McHuge who celebrate 50 years of marriage today. As the paper notes: “the date — April 29 — will be the only similarity between their wedding and that of Kate Middleton to Prince William.” At least journo Stephanie Masters had the courtesy to point that out … It wasn’t just the print editions drunk on royal wedding champagne. There was a triple murder in Adelaide, but that’s not going to sell commemorative editions of the Adelaide Advertiser tomorrow, is it? And what photo is more appropriate to accompany a story on 20 squatters arrested across London on The Age website than Kate waving goodbye to the single life? Luckily we think our good friends over the Tasman at the Franklin News may have beaten all our best efforts, and we bow to their superior coverage. At least Australia was spared the child bride angle … The media and refugees: reflecting public concern or fuelling it?

The line between media reflecting public concern about asylum seekers and fuelling racist debate is one many media outlets struggle to define, writes Sarah Hunt, a writer and media advisor to the Ethnic Communities’ Council of Victoria.

Simons: it’s the story of a generation — shape up, media

Today we have one of the biggest stories in the nation’s history. And it isn’t even on the front page of most of today’s newspapers, nor is it heading many news bulletins. Margaret Simons can hardly believe it.

It's the Digg for media critics: MediaFAIL allows deskchair watchdogs to highlight and vote on "the worst of American media".

Never seen a better reason to become a republic. Who cares about some silly wedding in some far off distant land that is becoming less significant to us day by day- apart from when the Ashes are played -except the journos and morning TV crews justifying their First Class travel and accommodation.

Rarely has there been a more worthy winner of the wankley.
Well done Amber.
(I don’t know how you managed to collate all that dross without serious brain damage.)

As a well earned reward, pour yourself a stiff drink, grab a brace of staffies and find a cat factory ASAP. 😀

As the paper notes: “the date — April 29 — will be the only similarity between their wedding and that of Kate Middleton to Prince William.”

Which rather begs the question …