A new super set of values

Truth, justice and the American way.

Truth, justice and the American way. “It’s not enough any more.” And so saying, Superman plans to renounce his American citizenship in an address at the United Nations — and to continue working as a superhero from a more global rather than national perspective. 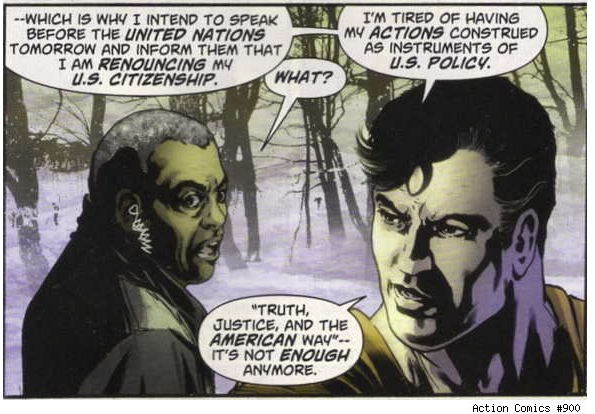 The decision is made in a short story in Action Comics No. 900. While it has caused consternation online among readers, reports NPR, DC Comics said Thursday the Kryptonian superhero isn’t abandoning his adopted country. It says he’s putting a global focus on his never-ending battle against evil and trying to keep a world that’s not his safe. That website of record, the Comics Alliance, is not so sanguine.

While this wouldn’t be this first time a profoundly American comic book icon disassociated himself from his national identity — remember when Captain America became Nomad? — this could be a very significant turning point for Superman if its implications carry over into other story lines. Indeed, simply saying that “truth, justice and the American way [is] not enough any more” is a pretty startling statement from the one man who has always represented those values the most.

It doesn’t seem that he’s abandoning those values, however, only trying to implement them on a larger scale and divorce himself from the political complexities of nationalism. Superman also says that he believes he has been thinking “too small,” that the world is “too connected” for him to limit himself with a purely national identity. As an alien born on another planet, after all, he “can’t help but see the bigger picture.”

Do you think the shift to a more global role makes sense for Superman? If he really is going to renounce his U.S. citizenship in order to function as a more international figure, how do you think it will affect the character?

I await your answers to these important questions.

And so to Lindsay Tanner. Having established with that Superman update my ability to trivialise, distort and rely on personality, celebrity and gotcha journalism, rather than any kind of serious elucidation of the facts and the issues, I now turn to this week’s performances by Lindsay Tanner.

The former finance minister clearly is distressed that his ministerial career was not taken as seriously by journalists as he thought it should have been. On ABC radio this morning he was bemoaning what he described as an increasing move by the media to portray politics as entertainment.

Not that politicians are to blame for the shift to entertainment-based reporting. No way. These innocent souls only performed stunts during question time because they wanted media attention and that was the only way to get it.

“Politicians, by and large, are essentially captives to the rules of the game that the media set.

“Who makes the decision about whether or not a particular statement or action of a politician gets in the media?

“It’s not the politician, it’s the media, it’s the individual media outlet.

“A free and fearless media is turning into a carnival sideshow.”

Apparently comments such as these are a major theme of a book by Tanner released this week. I will wait for it to be remaindered. Based on his previews, that will not be long.

A one sided race in Canada. Given that the Conservative government was forced to an election after losing a parliamentary vote, it is strange to see the country’s pundits all predicting that the government will be returned on May 2. The opposition parties would seem to have had a major miscalculation although there is still apparently an outside chance that a coalition of the non-Conservatives being cobbled together. As to which party will have the majority of seats, the market is much more certain.

Coalition well clear in Australia. An update of the market predictions as to what will happen in Australia the next time the country goes to the polls:

For some Trump supporters here in Australia, democracy seems to be an optional extra that shouldn't be allowed to get in the way of the outcome they want.

Joe Hockey ignores systematic voter suppression by Republicans to complain about Black Americans supporting a Democrat candidate, all in the aid of backing Trump's attack on democracy.

#truthjusticeamericanway; Donald Trump asked to see Superman’s birth certificate, the subsequent discovery that (actual) man of steel was an illegal alien has left the GOP even more confused than normal.

“Truth, justice and the American way” – Post 911, WMD, Gitmo, extraordinary rendition etc. that phrase is an oxymoron! Perhaps Superman is simply distancing himself from a regime sliding back to the dark side.

Alternatively the phrase was meant as a Cold War/newspeak joining of two roads that never have met, never will…