In today's Media Briefs: get your Will and Kate cut-out masks in The Hun, Fox wants Mike Huckabee for run for Prez, Star magazine apologises to Katie Holmes and more...

Royal wedding watch. Yesterday we asked for readers to send in any nauseating royal wedding coverage that they come across. Crikey reader Diana Lyons found this article by the Port Macquarie News titled “A right royal treat in store“. As Lyons noted to Crikey: “The Port Macquarie News always tries to get a local angle on the big stories. As you can see, it usually fails to come up with anything much at all.” 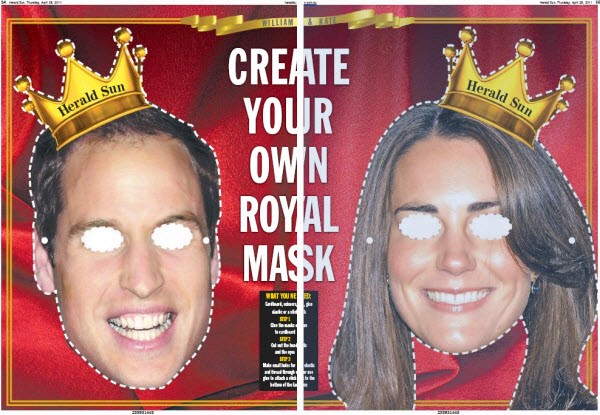 Front page of the day. Isn’t it nice to see a celebrity other than a member of the royal family or Justin Bieber on the front page of a newspaper? Especially when a clever pun is used … “Since February, a young Syrian-American English teacher has been blogging from Damascus about politics and what it’s like to be gay in Syria. Wednesday, her voice got out there in a more profound way after a blog post she wrote went viral. In the post, she tells of a visit two security service men, wearing black leather jackets and carrying pistols, made to her house in the middle of the night. They had come to arrest her for her blog, A Damascus Gay Girl.” — Washington Post

“Mike Huckabee may be running out of time to make a decision on running for president. It’s not that the former Arkansas governor feels any political imperative to speed up his timetable. But his Fox News bosses would like him either to jump into the White House race soon or announce that he’s taking a pass.” — Daily Beast

“Katie Holmes has settled her lawsuit with the publishers of Star magazine over a cover story that insinuated she was a drug addict.” — Huffington Post

“The Guardian is to close its regional news pilot Guardian Local, which saw three “beatbloggers” cover Edinburgh, Cardiff and Leeds for the newspaper.” — Journalism.co.uk

Huckabee Fox off with ‘no ticker’, so who’ll kick-start GOP cause?

Would the real Republican candidates for president please stand up? The field of conservatives willing to challenge has gone from almost nobody to anybody with a book or TV show to sell.

Obama remains an odds-on favourite for re-election. But it looks as if the US will have to endure some bad policy in the meantime.