It was all about Julia this week

Plenty of fluffy coverage for the PM about the standard nice things that leaders say to each other in public, destined to only get fluffier as the royal wedding lands upon us.

It was all Julia this week, with her trip to Japan and China the only thing on over the Easter/Anzac long weekend, with plenty of fluffy coverage about the standard nice things that leaders say to each other in public, destined to only get fluffier as the royal wedding lands upon us. Hopefully she might get a bit of a grilling about the Chaser censorship, but don’t hold your breath. I’m quite happy because now that the Chaser’s not on I can ignore it completely. Thank the gods for football.

Chris Bowen and Scott Morrison the big movers up the list as the asylum seeker issue — specifically the continuing protest at the Villawood Detention Centre and the renewed protest at Christmas Island — right back to centre stage, with the Government talking tough, raising the prospect of a return to temporary visas, except different. Even the pictures of tens of thousands of North Africans flooding into Italy every week still doesn’t seem to bring any perspective to the Australian debate. 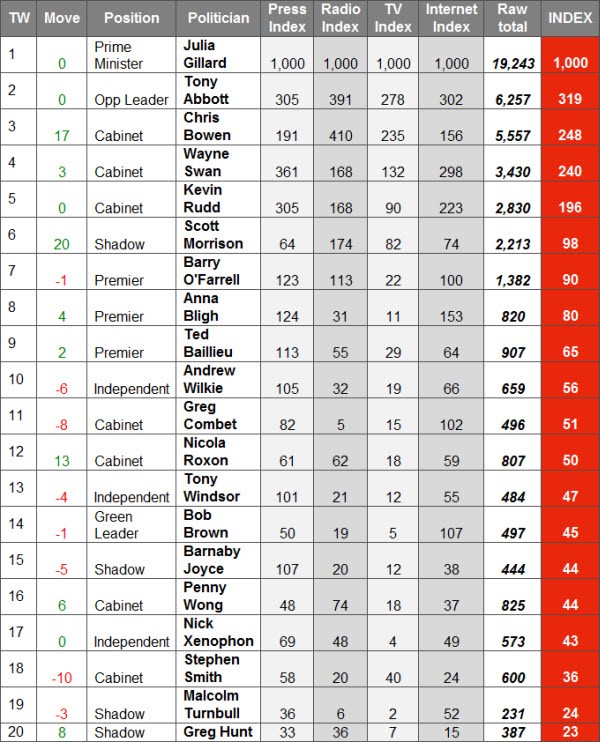 Villawood was the focus for most callers talking about politics over the Easter break, Chris Bowen’s response not convincing all that many.

If Fergie’s not there, I’m not watching! Don’t worry Duchess, you were always too classy for ‘em anyway.

Scott Morrison’s speech was content free, cliched, and little else