Check the quality of the paper…

Here it is: the birth certificate the world (or at least Donald Trump and the wingnut birther movement) has been waiting for...

Here it is: the birth certificate the world (or at least Donald Trump and the wingnut birther movement) has been waiting for… 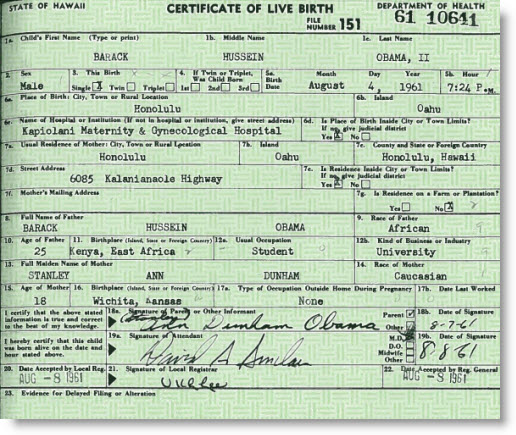 Well that settles that, then. Or not. Try these comments from a Fox News story on for size:

“Well, the article calls this a Birth Certificate, but it’s actually a Certificate of Live birth. There’s a difference! This solves NOTHING because we already knew about this worthless piece of paper that solves and proves NOTHING!”

“The movie, ‘Catch me if you can,’ directed by Steven Spielberg. It starred Leonardo DiCaprio, Tom Hanks and Christopher Walken. It is true story about Frank Abagnale, Jr. who, before his 19th birthday, successfully conned millions of dollars worth of checks as a Pan Am pilot, doctor, and legal prosecutor. In the movie, Frank understood the significance of paper in making pseudo paychecks. Therefore, the way to prove once and for all the pseudo birth certificate that Obama produced is to check the quality of the paper and that it was typed on a typewriter in the 1960s.”

“My favorite part is how his mother’s name is signed differently then it is officially typed.”

“Smoke and mirrors..Once seen an entire airplane disappear on stage in Las Vegas..Amazing what a good trickster can accomplish..”

“The ‘Certificate of Live Birth’ document released by the White House today, if authentic, assures Americans that their president was born in Hawaii as he has said, according to two participants in a lawsuit who challenged the president’s tenure in the Oval Office. But they say it also proves he’s ineligible under the Constitution’s requirements to be president.”

Of course it does.

Which makes you wonder, in his unprecedented and humbling disclosure, why Obama even gave Trump the time of day?

'Village idiot' Stephen Mayne flew under the radar at Harvey Norman's online AGM, until Gerry Harvey picked up the scent...

Yesterday the Uber CEO revealed the company was considering letting drivers bid for rides — a transparent move that will ensure his workforce is even less protected.

If it was so easy, why wasn’t this produced years ago when the question was first asked and kill the issue stone dead then.

As it is the birther issue has robbed Obama of oxygen to progress his agenda and been an unwelcome distraction.

Looks like another one of Randi’s unsinkable rubber ducks: as he said, “no amount of contrary evidence will ever un-convince the true believer”.

Actually Michael James the Certificate of live Birth has been available for quite some time. That the pres has to produce it again probably sticks in his craw (how many other presidents have had to do the same?). I suspect Trump is not an idiot & new the birther claim is false but it’s great publicity for him & his show anyway. The fact that Obama felt the need to show it again would seem to be a win for Trump. Either way the Pres loses because the birthers are all nut-cases who won’t believe it is legitimate – nevermind that countless other officials & witnesses can verify it. No wonder the good old US of A has become a laughing stock around the world. Unfortunately here in Oz we also have our fair share of flat-earthers – but fortunately most of them seem to live in Qld.

As for the Donald being a success we must remember that his career was kick started by daddy and foundered in financial mire during the 1990’s. His financiers lost 100s of millions of dollars as a result. To his credit some of companies did well after that setback but others have foundered. I think he is a bit like our own Bondy. Good at making money for himself and losing other peoples money. Also has the hide of a rhinocerous and is resiliant – which is a good thing in business. Would he make a good pres? Ah I’d say no – unless it was the pres of an African country. He’d fit right in over there.

Let’s face it, the birthers and Fox wing nuts will only be satisfied that Obama is eligible to be President when he turns white.