The CSIRO last week released what was effectively a statistical analysis of the reality surrounding large parts of the infamous Home Insulation Program.l

The CSIRO last week released what was effectively a statistical analysis of the reality surrounding large parts of the infamous Home Insulation Program — or for those of you not familiar with this particular policy, you may have heard about it via it’s common alternative name in the mainstream media, the “OMG, PETER GARRETT IS BURNING DOWN OUR F-CKING HOUSES!” policy.

As we here have long known and talked about, the reality of the Home Insulation Program was always vastly different to its hysterical media portrayal — driven as it was by naive and innumerate journalists looking for easy sensational headlines, and partisan hacks prostituting their cheap wares before a gullible public. Having a cowardly government lacking the plums to tell them all where to stick it was another unfortunate sub-plot in this tale of public deception about the reality of a substantial piece of public policy.

The CSIRO report covers three large areas — analysis of fire-related incidents, broader safety risk issues relating to the insulation program and the development of a risk profiling tool. Today, we’ll just focus on the fire related incidents component, as we’ve long been following this particular issue in depth and it’s nice to be able to bring it to a close, flip the bird at our detractors and exit the battlefield under a big banner saying “We told you so”.

The first thing that needs to be done is explain what the CSIRO “didn’t” do. It “didn’t” answer the elephant-in-the-room question: “In the 12-month period after having insulation installed, was there a difference between pre-program and in-program probability of having an insulation related fire incident?”. They provided all the data we need to get an estimate of it, they made a sort of assumption about it, but didn’t actually attempt to tackle that important question head on.

This question is important because it tells us whether the Home Insulation Program was safer or more dangerous in terms of fires than what existed before it over the short term — over the first 12 months of having insulation installed.

The second thing the CSIRO didn’t do was provide long-term background fire rates (the number of fires we should expect to see every year from all houses that have had insulation installed for longer than 12 months) that allow us to answer the questions “we’ve” been asking. They’ve provided background rates that answer a lot of different questions, that answer a lot of questions other people may have been asking, but not the ones we have. This is a simple methodology issue that we can easily deal with since the CSIRO kindly provided in the report all the data we need.

To get a feel for what actually happened, it’s worth looking at the strong relationship between when the fire incidents under the program occurred (defined as houses that had the fire services called out to them over what turned out to be an insulation related fire) and when insulations were actually installed. This data comes from Table 5.1 on page 30 of the report. 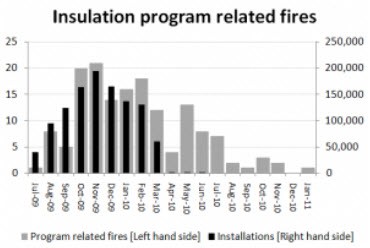 As the number of installations increased during the program, the number of fire incidents increased with it, before those fire incidents trailed off on an 8-12-month tail after the installations had ceased. This is important because it shows us straight away that most fires happened relatively quickly after insulation was installed. To really highlight this relationship further, if we change this data from a chronological month by month representation into one where we measure how many days insulation had been installed, for every fire incident under the program, this is what we get:

This data comes from Table 5.2 on page 32 of the report. I’ve aggregated it into 10-day periods, except for the first observation, which covers 11 days (days one through 10 plus what the CSIRO reported as the zero day, the same day of installation) .

Of the 156 fire callouts that occurred under the program (note — not the “hundreds” as some media outfits would have you believe, but 156), 43% of those fires occurred within 10 days of having the insulation installed.