Quick - what's the biggest sector of the Australian economy? The answer reveals a lot about what's happened since 2001, and what will happen in the next recession.

As part of an irregular series on illustrating what the Australian economy actually looks like, I devoted yesterday to putting together ABS and ATO data on shares of GDP, employee numbers and company tax take for each major industry.

The Australian economy a decade ago still gave prominent place to manufacturing, out of the eight biggest industries: 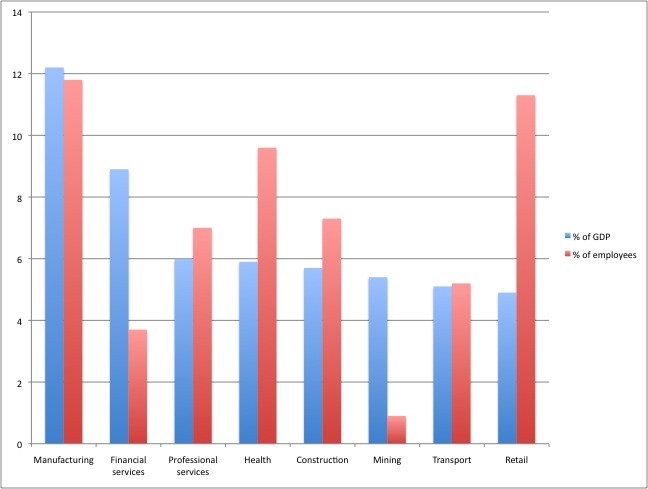 Even ten years after the second round of tariff reform, it was still our biggest industry both in terms of share of GDP and as an employer. But banking and financial services, propelled by our growing superannuation industry, was gaining on it. From 7% of GDP during the early 1990s recession, it was nearly 9% in 2001, although a relatively small employer. Professional services — lawyers, accountants, vets, scientists — was about the same size as the health sector, but the latter was a substantially bigger employer, although neither or them matched retail, the only other sector than manufacturing to employ more than 10% of workers.

Scroll forward to now, and let’s run the same chart, in the same order. 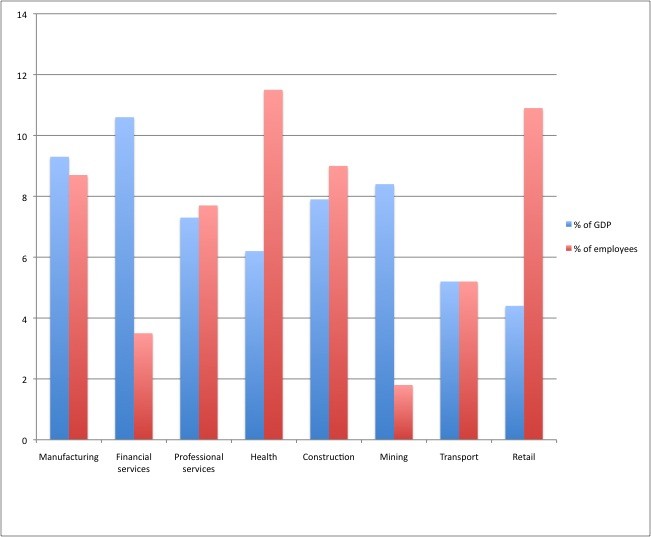 And yes, manufacturing has shrunk, significantly, both as a share of GDP and as an employer. It now employs 60,000 fewer workers than a decade ago, while the whole workforce has grown by 2.4m. If manufacturing had simply maintained its share of the workforce from 2001, we’d have needed an extra 350,000 workers. Financial services is now our biggest industry by share of GDP, although it too now employs a smaller proportion of the workforce. Health has expanded as a proportion of GDP, but its surge as an employer is what is truly remarkable; it has leapt ahead of both retail, which has maintained its share of GDP and only gone marginally backwards as an employer, and manufacturing to become the biggest single employing industry.

More Australians work in the health or care professions than any other sector, and if the same rate of growth over the decade is maintained over the next, we’ll have fractionally under 2m workers in the sector.

Construction grew solidly in its share of GDP and workers. And mining, of course, has been the big mover. It doubled its proportion of employees, albeit off a very low base, but now forms over 8% of the country’s GDP. Other sectors fell as as badly or worse than manufacturing. Agriculture was just under 4% of GDP a decade ago but is now 2.3%, employing just 3% of workers when it used to employ 4.7%. That still makes it much bigger employer than mining, however. 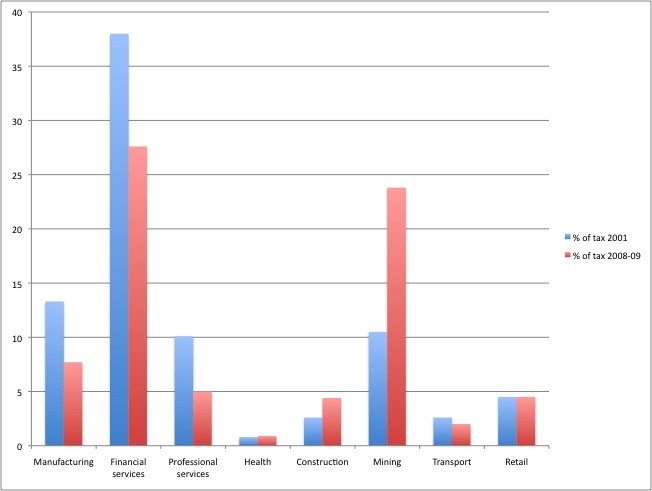 No other sector provides more than 10% of company tax receipts. Between them, financial services and mining provided over 50% of corporate tax revenue. Moreover, they do it while employing a tiny number of Australians – just over 600,000, or fewer than 1 in 20.

The 2008-09 figures are for the nadir of the GFC. Both financial services — especially the big banks — and mining have grown strongly since the recovery, while sectors like retail and manufacturing have struggled. It’s like that for 2009-10 and now, financial services and mining will dominate corporate tax receipts. Both industries, and especially mining, are pro-cyclical industries.

One of the legacies of the Howard Government’s personal tax cuts last decade was to make the Federal Budget more reliant on other forms of taxation, and most especially company tax, which grew as a proportion of the total Commonwealth tax take both because of the economic conditions at the time and because the personal tax take was slashed. That means the Budget is now more reliant than ever on the mining and financial services industries.

Which is fine while things are good. The next downturn, however, will do even more damage to Commonwealth revenues than the GFC.

Was it Hitchhiker’s Guide to the Galaxy which included a spaceship called the B Ark.

The story line is that this ship was loaded up with the management consultants, hairdressers and toenail polishers of the planet and shot off into space. Those on board thought that they were the lead party of a recolonisation project, fleeing a doomed Earth.

In truth, the Earth was in no danger – it had ejected its detritus.

Australia more and more resembles the B Ark.