A Crikey reader wrote in suggesting a competition for the lamest local angle on the royal wedding story, offering up his nomination with this piece of purple prose. Got any vomit-worthy contributions?

A right royal competition. A Crikey reader wrote in suggesting a competition for the lamest local angle on the royal wedding story, offering up his nomination with this piece of purple prose from Saturday’s Bendigo Advertiser:

“Tanya Metcalf and Nick Rive’s romance is like a fairytale, so it could be a good sign that they are getting married on the same day as Prince William and Kate Middleton.”

Others on Twitter are preparing for the cheesiest wet weather wedding lines. Channel Nine’s celebrity rent-a-quote Peter Ford tweeted “So it’s looking like we’ll all be able to use the classic ‘rain failed to dampen the spirits’ on Friday”, after weather reports for London predicted (surprise!) rain. Spencer Howson from Brisbane’s 612 ABC offered up: “No sun but Kate shone”, while TV blogger James Caldwell tweeted the brilliant: “The Bride and Groom remained composed but Britannia herself wept as her favourite son wed on this most typical English day.”

Sadly, we expect it’s a pretty accurate preview of what’s in store. Seen something truly vomit worthy about Big Willie and Babykins’ big day? Drop us a line… — Amber Jamieson

Grimshaw’s swipe at her own company? Tracy Grimshaw did her best to defend the tawdry content of her own show in a glowing profile last weekend in Fairfax’s Good Weekend magazine. But she couldn’t help taking a swipe at some of the magazines her company produces in a London chat with Nine’s royal commentator Ita Buttrose on Monday night.

Ita is sharing A Current Affair‘s Palace-side studio in the lead-up to the royal wedding and was quizzed by Grimshaw on the success of her ABC bio-pic Paper Giants and the culture of Nine and ACP Magazines under Kerry Packer. She hit out at the Rupert Murdoch bunker –“if you really want a boy’s club you should work at News Limited” — and then lamented the downward spiral of the magazines she once proudly edited. “They treat women primarily like idiots,” Buttrose said.

Grimshaw offered her own assessment: “You know, I agree with you. There are a few exceptions obviously, but I think a lot of magazines don’t treat women like friends, they treat women like targets.” Would the rebranded Nine Entertainment Co’s stable of women’s titles — from Women’s Day to Cosmo and Cleo and the Women’s Weekly — be among the exceptions, Tracy? — Jason Whittaker

Front page of the day. If you think the media obsession with the royal wedding is bad here, imagine what it’s like for the poor Brits. Even The Independent can’t escape it… 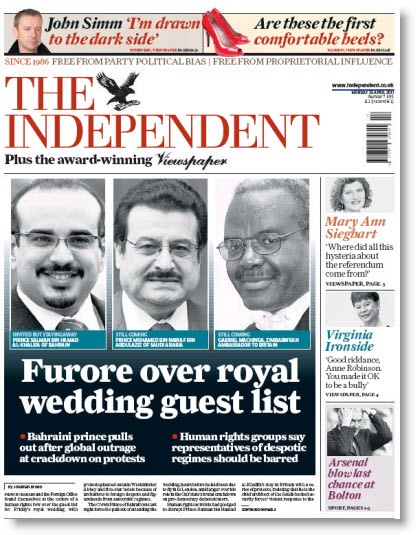 “While other networks are busy running voting campaigns for their Gold Logie nominees, the Spicks and Specks host [Adam Hills] is at a distinct disadvantage: the ABC can’t give out the phone number to vote for him. Promoting the 1902 phone number would be a commercial promotion for ACP Magazines and phoneline company 5th Finger, which contravenes the ABC Charter.” — TV Tonight

“The U.S. State Department has quietly abandoned its America.gov site to refocus its efforts on Twitter, Facebook and the like. Call it #USDIPLOMACY, and tell us what you think State should be doing to reach out, worldwide through social media.” — Social Times

Katie Couric leaves CBS, no word on where to

“‘I have decided to step down from the CBS Evening News,’ Couric tells PEOPLE exclusively.” — PEOPLE

“Yesterday, we reported that National Geographic had bought ScienceBlogs. We’ve now obtained a recording of a conference call between various members of National Geographic senior management, ScienceBlogs management, and ScienceBloggers — aka Sciblings — that adds some details. What we’ve learned is that Nat Geo plans to assume control of operations, editorial content, and ad sales by June 1 of this year.” — Retraction Watch

“The newspaper of record for the Chicago suburbs has been subpoenaed with a request to disclose the identities of many of its online commenters.” — The Huffington Post

“Last week, Sony’s online network for the PlayStation suffered a catastrophic failure through a hacking attack. And since then, the more than 60 million gamers worldwide… who have accounts for the service have been unable to play games with friends through the Internet or to download demos of new games.” — The New York Times

Could a merger bring mercy to Bauer Media?