Low inflation coming to an end?

A troubling sign. The March quarter consumer price figures released by the Australian Bureau of Statistics this morning certainly raise the question about whether the run of low inflation figures is coming to an end. As expected the headline figure was up substantially on that for the December quarter with the rise of 1.6% being […]

A troubling sign. The March quarter consumer price figures released by the Australian Bureau of Statistics this morning certainly raise the question about whether the run of low inflation figures is coming to an end. As expected the headline figure was up substantially on that for the December quarter with the rise of 1.6% being the largest quarterly rise in the CPI since the June quarter of 2006 when the CPI increased 1.6%. 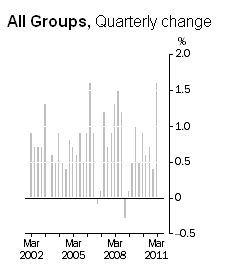 Floods and cyclones can be blamed for much of that steep rise but the increase in the Reserve Bank’s measures of core inflation are harder to explain away. With quarterly changes of 0.8% and 0.9% these two measures — the weighted median and the trimmed mean which take out the most volatile components of the overall CPI changes — suggest that the Reserve Bank will have something to worry about and that interest rates will soon be on the way up again.

Pity the non-mining exporters. With the Australian dollar sitting at over $1.08 to the US currency after the higher than expected consumer price index figures this morning, we should spare a thought for all those Australian businesses who heeded the advice of their government and actively pursued the development of an export market. For most of them not in the mining business they are now facing extinction. The high value of the Australian dollar will wreak havoc on huge sectors of manufacturing industry in the next few months and add to the woes of the federal Labor government.

Diplomatic speak. William Hague, the UK’s Foreign Secretary, yesterday offered these words of wisdom about the conflict in Libya: “In certain circumstances, it is legal under the UN resolution to supply equipment to protect civilian life.” And what was he talking about? The supply of weapons — guns and things — of course. Just the things needed to protect civilian life.

Not that I am complaining about the growing pressure to get around the United Nations embargo that forbids sending weapons to Libya. The embargo favours the side that has them — Colonel Gaddafi’s forces that include the armed forces — and penalises those opposed to him. As I suggested in Crikey at the time of the outbreak of h0stilities the Security Council had a strange sense of logic.

An amazing fellow. Federal Sports Minister Mark Arbib never ceases to amaze. No, my surprise was not at his stupid statement that Tony Abbott would be a decent role model for NSW Labor Leader John Robertson to follow. I expect things like that from him. The real shocker was the decision to get the federal government involved in yet another review of that round ball football game. Surely we wasted enough tax payer money on the failed World Cup bid without having to stump up more to try and get the sport run properly.