Religious instruction is a form of indoctrination, literally, and is not about what most teachers would regard as good learning, writes teacher and researcher Tony Taylor.

The current fierce debate about the controversial presence of religion in state schools in Victoria echoes previous and continuing debates in other states and territories about this issue but suffers from a near universal failure to distinguish between religious instruction, or RI, and religious education or RE. The former phrase is the Victorian Department of Education and Early Childhood Development term for what is a de facto propagation of Christian dogma within a secular school system.

I can make that assertion because the majority of RI is provided by Access Ministries, the trading name of the organisation Christian Education in Schools.  The latter term RE generally refers to the study of multiple religions — from the inside or from the outside. In other words, RI is only about inculcation but RE can be about the comparative study of religions as phenomena, as a set of ideologies. RI therefore is a form of indoctrination, literally, and is not about what most teachers would regard as good learning.  RE can be about inquiry, investigation and the drawing of conclusions, all good educative activities.

Further, many of the faithful take an opinionated and exceptionalist line in privileging religion. They argue that religion is not merely an ideology, as did Barney Zwartz (“Why Christianity should be taught, properly, in our schools”, The Age,  April 11) when he offered the following argument. “Many secularists,” he contended, criticise religions as ‘ideologies’, as though religion were merely a set of (false) truth claims.” No Barney, many secularists, most agnostics and all atheists argue that religions are simply ideologies based on transcendental dogma, as opposed to being based on secular or materialist foundations.

In a secular state school system, it therefore follows that, if the DEECD intends to be true to its laudable policy of “building on the values of respect and inclusion” by “ensuring equitable access to services and programs and recognising cultural diversity as an asset to the state” it would be obliged to provide and support religious instruction in all schools for the 120 or so religions that exist in Australia, as well as instructional classes in humanism, Marxism, atheism and so on — on the basis that if Christian instructors are in a more favoured position because of their organisational and staffing resources, it is the DEECD’s responsibility to ensure that equitable access reigns. This is an unlikely scenario but one based on the logic behind any appraisal of religion as a spiritually based ideology.

Something else strikes me about the department’s position on religious instruction in a secular system.  In a published correspondence that lies somewhere between George Orwell (doublethink), Lewis Carroll (Humpty Dumpty on words and meanings) and Charles Dickens (the law is an ass), the DEECD portentously and outrageously informed Hawthorn West Primary School parent Tim Heasley that, when it came to religious instruction, their legal opinion was that the word “may” actually means “must” (“Backlash as God forced into schools”, The Age, March 27).

In chasing up an independent legal opinion I was, however, referred to Section 45 of the Victorian Interpretation of Legislation Act. This section states that: “where the word ‘may’ is used in conferring a power, that word shall be construed as meaning that the power so conferred may be exercised, or not, at discretion’.” Seems simple enough to me. A school may offer religious instruction, or may not. Or maybe I am missing something? Could it be that a state education department is privileging Christianity?

These arguments of mine are not merely about opinion: we have real evidence about the impact of RI. Monash researcher Velleda Bradford has studied the delivery of religious instruction in primary schools. There is a wide range of practice when it comes to religious instruction, some good, some bad and some totally off the wall, but the common approach seems to be that Christian religious instruction is about values education through Biblical or other religious examples.

As many teachers in the study pointed out, values education is already part of an over-crowded school curriculum and the majority of teachers surveyed were very, very uneasy about giving space and time to this doubling-up approach because of practical issues and issues of principle. One commented, “In an ideal world, I wouldn’t have RI, and I reckon teachers would be much happier if it was not something we had to provide.” Another teacher, remarking on the difference between education and instruction, pointed out that “my role as a teacher is to ensure inquiry-based learning is free from dogma and conducive to objective, independent thought”. On the basis of that representative comment, RI clearly belongs outside school time.

We have been having these debates in Australia since the 1836 when Governor Bourke unsuccessfully tried to bring in a system where denominational religious instruction was taught to the two major religious cohorts as an out-of-school activity. Could it be time to go back to 1836 and try again, but this time with more than a hundred religions, not to mention a dozen or so secularist groups? Or is it time to cut the Gordian knot, be courageous, take RI out of state schools and bring a 21st-century solution to bear on a 19-century problem? 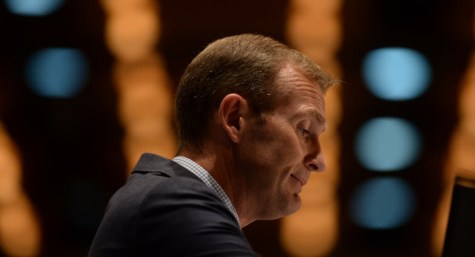 Is religion really on the rise?

There is clearly an argument to take all RI out of schools. No Christains, no Muslims, no Hindus, no anybody pushing their faith or world view on anyone.

Then there is the argument to have RE in schools. But taught by whom? Who does not have a world view? Wont whoever is teaching it, be bias to some philosophy or religion, atheist or Christian, Muslim or agnostic? How will RE be packaged and how can we guarantee a fair and equal treatment of all faiths and world views?

Then there are some who ask: why on earth would you give a fair and equal treatment to all of them anyway? Some are horrible, others are just a bit ugly, and others are bland and boring…. but why give the really crap ones any time, other than to demolish them? (Of course, such a position presupposes an accurate understanding of all world views and an accurate assessment of some as being really dangerous or bad.)

Then there are others who play the majority in a democracy argument: over 65% of all Australians call themselves Christian on census night…. it has a mandate to propogate itself. It is the majority religion, and so long as it teaches respect and tolerance, it should be allowed to have primary access to schools.

I have heard others take a very different view that is tangental but related to this conversation: there should be no private schools in the country. No Muslim, Jewish, Christian, Buddhist, Montesori, Steiner …. none at all. They are divisive and separatist and they do not foster harmony and tolerance. They maintain the emphasis of the particular group and by default or on purpose belittle all others. It is unhealthy for a multicultural community. All our children should be in state schools and RE (not RI) should be taught to all in a spirit of tolerance and harmony and respect.

These questions have been around since schools started in Australia. I suspect that we are kidding outselves if we think we will ever solve it.

In a secular state there is no place for religious indoctrination in state schools. There areplenty of opportunitiesy for the purveyors of religious fairy stories to peddle their wares on a voluntary compliance basis outside of the school system. How long before the “Islamofacists” want entry to schools to peddle their particularly misogynistic and hateful representations of their religious fantasies?

The fundamental problem here is the gutlessness of all sides of politics to stand up to this potential intimidation of right-wing religious groups because of the power of organised religion to organise its sheeplike followers to vote for a particular party at the behest of their religious leaders. As a consequence we have a small army of well wishing do-gooders peddling their religious wares under a variety of circumstances in schools , and the children of those rational parents who object to this form of brainwashing being separated from their classes and not necessarily being offered any meaningful teaching during the period of isolation.

Surely, the issue is more what the parents deem appropriate for the child and if the parents are wanting some form of RI (even minimal) and can then only get that at a private school…… what form of exodus and strain would we see on the public education system? Not sure what that would be but my take is that they are better off minimising the time RI takes and stopping it at a formative age, rather than eradicating altogether.

Education is a complex system that is sometimes impacted by the smallest decisions and we need to be careful that we manage this by consequence and risk rather than by purely opinion, ideology and/or law. Too many mistakes have been made without due assessment in the past.

we had absolutely no informed consent with RI at my son’s primary. Just went to class. I had to ask what the story was.

I attended a Catholic school where RE was a compulsory component of study until the last day of attendance. Despite being taught by Brothers, Priests and Nuns, I was given the oppoortunity and encouraged to explore other religions. Obviously, there were far more resources available if I chose to look at the Catholic Church, but many didn’t. I know of fellow students who completed detailed reports on Taoism, Buddhism, Hinduism and many more ‘minority’ religions from around the world. I myself completed my final report where I put forward the argument that religion is akin to a multinational business, with the Pope as Global CEO and many regional CEOs under him. It was marked by the Headmaster, a Brother, who gave it an A. I do think religion has a place in school, but children should be given the opportunity to explore all religions, see what they are based on, why they exist and why thousands, if not millions devote themselves to them.