ABC News 24: what does it cost? The ABC has released the true cost of its 24 hour continuous news service in response to an FoI request made under the YouCommNews system. The total cost of the Continuous News Centre from its launch in 2006 until the end of last month  is $25.37 million dollars. The breakdown in costs is:

The big lift in costs last year and this year coincides, of course, with the launch of the ABC News 24 channel, which was the main focus of the FoI request. The 2011 costs relate only to the period until 31 March. However, those parts of my request that relate more directly to the true cost of ABC News 24 have been refused. (Read the full text of the ABC’s response here.)

Yesterday I telephoned ABC FoI officer Judith Maude to negotiate over her refusal to release information about the true cost of ABC News 24 on the grounds that it was a voluminous request. I expect to hear back after Easter, and will keep you posted. — Margaret Simons of YouCommNews

Front page of the day. The honour goes to the UK’s Halifax Courier, which duly reports that Will’s and Kate’s Royal wedding coincides with the big day of three local couples. After all, all news is local… 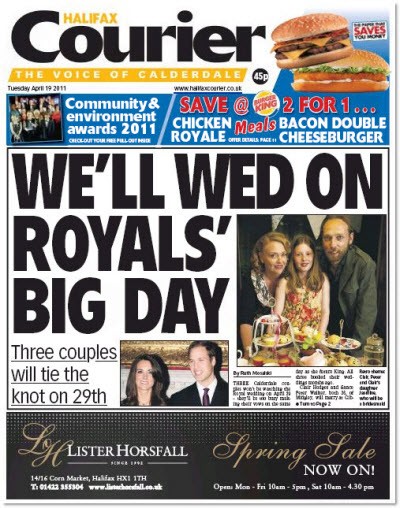 “It’s not every year that classified histories of two wars and massive troves of diplomatic secrets appear in America’s newspapers. So it may have surprised some to read through the list of Pulitzer prizes Monday and see no mention — among the winners or even the finalists — of WikiLeaks’ revelations. But WikiLeaks wasn’t dissed by the Pulitzer judges. In fact, the New York Times, which dominated WikiLeaks coverage in the US, never submitted its reporting on WikiLeaks for the prize.” — Forbes

“Ed Miliband has become the first political leader to call for an independent review of newspaper regulation and practices after the admission by News International that it hacked into the phones of celebrities and politicians then failed to carry out full inquiries into the wrongdoing.” — The Guardian

“I am writing about something that today hit independent.co.uk regarding the article which actually has this url: http://www.independent.co.uk/life-style/food-and-drink/kate-middleton-jelly-bean-expected-to-fetch-500-2269573.html. That however was far from the url that was tweeted about 6am, where the headline component had been changed offensively and using words I cannot post in a blog with various word restrictions.” — The Independent

News Corp to acquire Formula One

“News Corporation, the global media group, is in the early stages of talks about forming a consortium that would seek to acquire control of Formula One (F1) motor racing, I have learned. Participating in a consortium that would buy F1 is only one of several options that News Corp is examining in relation to the sport, which may come up for sale during the next 18 months.” — Sky News

“On April 1, sports journalist Christophe Cerf and cameraman Yvan Thorimbert from Radio Televison Suisse were filming “landscape shots” for a report on Qatar’s staging of the World Cup when local flatfoots stopped them, slapped on the cuffs and confiscated their equipment. The reporters were held against their will for almost two weeks and interrogated several times.” — Deadspin

Three social media skills they should teach in journalism school

“I want to share three social media skills that I believe should be part of any journalism school’s curriculum, if it isn’t already.” — 10,000 Words

I bet Their ABC weren’t keen to divulge the information. What a waste of money! Most of the so-called “news” they broadcast the audience could find for themselves – with a visit to the Liberal Party website or The Australian. And the constant repetition of the line, “The Federal Opposition says …” has made the ABC a laughing-stock. So much for “investigative journalism”.

While on the topic … Campaign to restore ABC to its charter on GetUp – add your vote to reclaim our ABC back from Newscorp.

News Corp to acquire Formula One

Bad enough that we have to listen to the good ‘ol boy sanctimonious bullshit of “NASCAR on FOX”. Can’t wait till the broadcasts move to ESPN for a few races.