Greenpeace has obtained some 30,000 memos, emails and transcripts which document last year's disastrous BP oil spill in the Gulf of Mexico. Here's what Tom Cowie and Amber Jamieson pulled out of the WikiLeaks-style document dump.

In the middle of last year, Greenpeace submitted a string of Freedom of Information requests to US government agencies in relation to last year’s disastrous BP oil spill in the Gulf of Mexico.

As a result the environmental group have obtained some 30,000 memos, emails and transcripts which document the worst oil spill in American history. Taking cues from WikiLeaks, Greenpeace has begun to leak its considerable cache online for all to see. Here’s what we pulled out of the document dump:

In one internal email, BP environmental expert Russell Putt asks his colleagues if the company can take control of the $500m research fund set up to investigate the impacts of the spill:

“Can we ‘direct’ GRI [Gulf of Mexico Research Initiative] funding to a specific study (as we now see the Governor’s offices trying to do)? What influence do we have over the vessels/equipment driving the studies vs the questions?”

Butt’s request came after BP officials discussed whether the company could influence the research program to studies that BP considered “useful”. 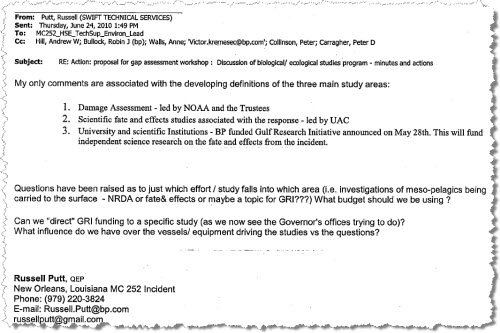 According to BP minutes contained in the same memo, BP director of environment and social responsibility Liz Rogers cleared up the issue by informing her colleagues of the “context” around the research program – that it was set up to by a board of trustees to be “independent” of BP.

Says Rogers: “It may be possible for us to suggest the direction of the studies but without guarantee that they will be done.”

Other emails released by Greenpeace reveal a war of words between BP and the government of Louisiana, with both accusing the other of delays in a sand berm project as part of the Deepwater Horizon spill cleanup.

The sand berm project involved building temporary sand barriers to protect coastal communities and a wildlife refuge. Louisiana Governor Bobby Jindal, a Republican, was very public in his demands for sand berms to be used post-spill, to be paid for entirely by BP, but accused BP of delaying funding for the program.

Victor Aguiluz, a senior attorney at BP, sent an email on June 1, 2010, to an attorney at Jindal’s office and to Garret Graves, the director of the Governor’s Office of Coastal declaring:

“Given the Governor’s comments this afternoon, just wanted to be clear that, in our view, BP has no further work deliverables to send to the State in order to progress our efforts on the W9 project  to the next step. BP is now waiting on the State’s action and  response.”

Specifically, we have been waiting for a copy of  the State’s contract with the dredging consortium  since the State’s first indication to us last Saturday (May  29)  that it would have an executable  contract ready to send over  for BP’s review later that night.”

BP proposed that it would it would fund the program, but was waiting for a dredging contract from the state declaring the full amount. The State wanted the money upfront. BP wanted to pay by milestones as the project went along.

The following day Graves replied, saying that BP was leaving the state liable for possible funding, a move which is “likely illegal in Louisiana”.

Graves was quick to put the blame on BP: “It  seems that confusion on the part of BP continues to delay this important effort. … We remind you that this is BP’s spill … The state will not agree to egregious provisions or any attempt  by BP to reduce liabilities otherwise assumed by BP or inappropriate financial terms.”

Aguiliz then replied on behalf of BP, with one line bolded: “To be absolutely clear, we cannot progress BP’s offer without  first receiving a copy of your proposed contract with the dredging consortium.”

Aguiliz also noted that it seemed that BP was expected to simply fund the program, without any input to it, which it opposed.

Graves replied, saying “Thank you for agreeing to front costs. That is a step forward…”

The back and forth email frenzy continued, with Aguiliz replying: “I think we may still be misaligned on the funding. I would not use the words ‘front costs’.”

The conversation about the contract then moved offline.

The document haul also reveals British diplomats were making immediate attempts to limit the political damage following the spill. Ambassador Sir Nigel Sheinwald wrote in one memo that they needed to be “active and empathetic”, while other officials urged a move to distancing themselves from BP:

“Is there discussion about taking some steps to distance ourselves from the problem or mount a media response campaign?”

The emails also showed the difficulties Sheinwald and officials encountered in trying to set up a meeting with embattled CEO Tony Hayward. Sheinwald urged his colleagues to “realise pressure” on Hayward, but also to make it clear that he would have a sympathetic audience.

The emails also reveal that environmental groups were consistently expressing their concerns to the National Oceanic and Atmospheric Administration (NOAA) over the effects of BP’s controlled oil burns on sea turtle populations in the Gulf of Mexico.

Around 250 pages of emails reveal animal welfare groups were constantly in contact with the NOAA during the controlled burning, with many asking for clarification of press reports of turtles being burnt alive.

Figures released in the emails show hundreds of turtles perished in the fires, with groups like PETA, the Turtle Island Restoration Network and the Center for Biological Diversity concernced that BP were not doing all they could to save the turtles. Another set of emails lays out the effects of the oil spill on threatened species, including dolphins.

Other emails obtained by Greenpeace appear to show the rush by university departments to be involved in the $500m BP research fund.

In one email a Texas A&M representative urges a group of Texan universities to set up a consortium like other states in case “funding comes this way”. Additional emails appear to show that BP were solely in charge with granting permits to scientists to access affected areas.

But it’s not just serious issues that the emails deal with. Banter between Phil Precht from ConocoPhillips and Drue Banta from the State Department show two workmates discussing a work dinner.

“What’s your preference for food, steak, seafood, Italian, etc…? ” asked Precht. “Easy choice — steak in Baton Rouge,” replied Banta. The following day an email chain appeared over the loss of an umbrella after their steak dinner.

There were also rumours of a possible presidential visit. “… hate to bother you with a rumour,” wrote Jeff Copesky, government relations for Exxon Mobil’s Baton Rouge refinery, to Graves, “but heard very second hand that the WH [White House] may be considering next week’s event in Grand Isle (4/22) as a possible venue for the POTUS [President of the United States] to mark Earth Day. Have you heard anything like this?”.

There are also lots of cheerful emails from the wonderfully named Chrysanthe Munn who, according to her Facebook, is Executive Assistant to Head of Subsurface. The best detail? Munn signs off her emails with a curly signature and a flower.

Good morning, early birds. Following almost two weeks of protests in the US, Democrats have introduced the Justice in Policing Act, and the Morrison government will reportedly aim to reduce the number of Indigenous people incarcerated by reforming 'Closing the Gap' goals. It's the news you need to know, with Chris Woods.

A BP employee will appeal the Fair Work Commission’s ruling that it was fair to sack him over a popular online Hitler meme. The case is the latest in a line of examples of social media blurring the lines between work and recreation.

Carsales has defeated CarsGuide in the Victorian Supreme Court. Plus other business tidbits of the day.

Dammit. That was my bad.

If they got this as an FOI, can you explain in what way this is a “leak”.

does an FOI come with conditions of use which preclude open publishing?

Great work Amber and Tom (with your bad and all Amber).

it was a gushing blowout leak, not a spill