Kevin Rudd still drifting down the list as the climate heats up, Greg Combet making his first ever top three appearance — is he the John Paul Jones that will keep the noise from the herd of cats called the ALP and its fellow travellers down to a dull whine as they damn the torpedoes? The alternative choices for the Gillard Government remain so unappealing as to remind us of Churchill’s view of democracy — the worst possible system, apart from all the others.

The Tony Windsor v Barnaby Joyce title fight to be was a fun sideshow this week. If Windsor is standing he will clearly have a tougher fight than ever before, but it does beg the question of what kind of support Joyce has within his own party if New England is the only option…are some of them quietly putting two bob on Windsor?

Andrew Wilkie’s front foot owning up to all kinds of bad behaviour as a cadet (other than really bad behaviour) and his repeated accusations against the hospitality industry, was an interesting study in PR — effectively saying I’m far from perfect but that doesn’t mean I’m wrong, but it’s a fine line between that and being classed as a whinger, the ultimate Australian sin (even though we are collectively world beaters in that particular skill). 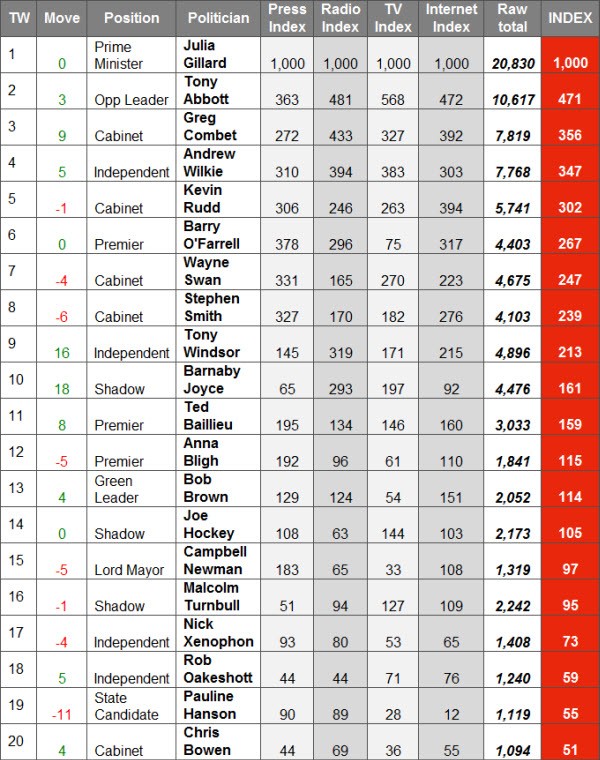 Surprisingly low level of politician name dropping and or cat calling on talkback this week, despite all the hot button issues — climate, defence, pokies — running at the moment.

A whole lot more free content for a certain program’s scriptwriters is about to dribble out — but will they be able to get James Gandolfini for the part?