Sun shines on 60 Minutes reporter. We’ve been curious, for some time now, how it is a journalist from Nine’s once-venerable current affairs stalwart 60 Minutes is able to spruik for commercial interests. Ever since, last October, Charles Wooley became the spokesperson for solar power provider Nu Energy, appearing in a suite of print, radio and television advertisements.

“I”ve travelled the world with my work and I have seen firsthand the benefits of looking after our planet and developing sustainable industries,” Wooley apparently said in a press release. “Nu Energy is a company that believes, as I do, in using renewable energy.”

We wondered aloud — to Nine’s publicity department and 60 Minutes executive producer Hamish Thomson — why Nine allowed its star reporter to spruik a commercial enterprise, and whether the deal undermines his role as a journalist and damages the credibility of the program. We queried how Nine might handle this conflict if Wooley was assigned to an energy or environmental story (he got close with this yarn on marine parks last Sunday). And whether it was — and we’re happy to be corrected — fairly unprecedented for a journalist, even in the more morally ambiguous world of commercial TV, to be appearing in ads for a company.

A week later we’re yet to receive a response. We’ll keep you posted. — Jason Whittaker

Nine exclusive: royal wedding. Every TV network in the known universe will have its cameras fixed on Westminster Abbey for the royal nuptials. So just how will Channel Nine viewers “see it first”? Perhaps their satellite feed works a few milliseconds faster…

Well actually it’s the, erm, Spectator. The Daily Mail columnist Richard Littlejohn — a sort of UK Piers Akerman, current licensee of the phrases “political correctness gone mad” and “you couldn’t make it up” — has been considering the 2012 Republican candidates, from whence comes his slur on Sarah. It gets worse:

“Her main function in life is as a political pin-up for men of a certain age. I read the other day that there are now clubs where you can buy a lap dance from a Sarah Palin lookalike — which I suppose is some kind of compliment. Last time I looked, Spearmint Rhino wasn’t employing any [UK Home secretary] Theresa May clones to pull in the punters.”

Sneering, and a cheap s-xual dig. Doubtless Spectator Australia editor Tom Switzer — who hates that kind of thing — made his protests known to Old Queen Street, i.e. the Speccie‘s HQ. It really is. You couldn’t, as they say, make it up. — Guy Rundle

Front page of the day. NT News, we see what you did there: 1980s Australian bands are ripe for the occasional newspaper headline pun… 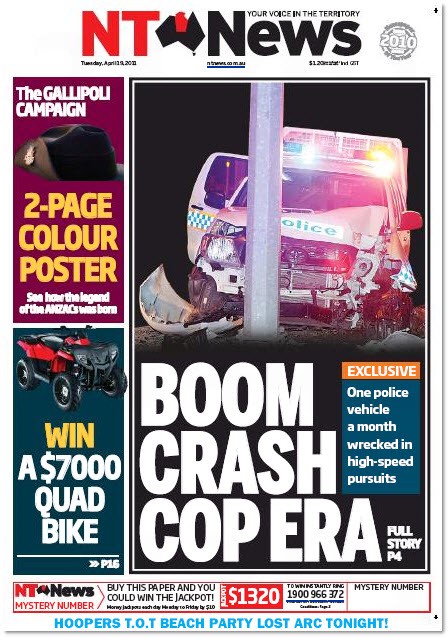 Roger Ailes caught spying on reporters at his small-town paper

“The small-town newspapers in New York’s Hudson Valley that Fox News chief Roger Ailes owns with his wife Elizabeth are in a staff revolt after employees caught Ailes spying on them with News Corp security goons.” — Gawker

“Fresh off the wild success of internet-fueled Middle-East revolution stories, Al Jazeera English today is launching the online component to its forthcoming social media-centered news program, The Stream. It’s the most aggressive integration of social media into a live news program to date.” — Fast Company

Woodward, no longer banned, on making his first visit to Nixon Library

“Don’t assume you can just drop in on the ‘Remembering Watergate’ panel discussion Monday night at the Nixon Library in Yorba Linda, Calif. Every seat in the house has been booked for the first-ever visit there by our colleagues Ben Bradlee and Bob Woodward.” — Washington Post

“Reuters has fired a bureau chief who had worked at the agency for 20 years for making a crude remark in an internal online chatroom.” — The Guardian

Twitter looks to widen appeal, in talks to buy TweetDeck

“Twitter Inc, trying to put recent management turmoil behind it and build its business, is taking steps to broaden the appeal of the well-known messaging service. Twitter is also in advanced talks to purchase a program used by many Twitter users to view and manage tweets, Tweetdeck, for around $50 million, people familiar with the matter said.” — Wall Street Journal

In 2010, Perth woman Claire Murray, a heroin addict, died as a result of complications from her second liver transplant. A new film chronicles her life and the media pile-on it inspired.

When the proverbial hits the fan and someone becomes engulfed in a media storm, there’s an army of people ready to clean up, for a price.