Yesterday I sat down to eat my lunch and noticed something weird unfolding on Twitter. It appeared to be a kind of surreal online performance piece in which I was unwittingly cast as one of the key players.  Bizarrely, the words “Luke Buckmaster” and “time machine” were mentioned 10 separate times in a flurry of online activity that began shortly after 1pm and was still going nine hours later.

It all began with a scary movie. Last Friday I wrote a story about how Fairfax film critic Jim Schembri spoiled the ending of Scream 4 by revealing the identity of the killer in the opening sentence of his review. Youch.

Like many other people, I read his review online last Thursday and was surprised that such an experienced film journalist had broken one of the cardinal rules of film reviewing: you don’t give away the ending.

But in a strange twist, the copy on each Fairfax website had changed come the morn and the print version of the review published in The Age the following day was different too. Schembri’s critique was now spoiler free.

That’s odd, I thought, so I emailed him at 9.12am Friday and asked him to comment on the changes. I sent him the original and the altered content and wrote:

“Could you please (comment) on how that change came about? Was the first version a mistake — i.e. an earlier draft of the review — or did you intend to reveal the killer’s identity? Your response would be greatly appreciated.”

Schembri did not respond to me but went on Twitter shortly after and wrote the following: “Scream 4: ALERT — We do NOT give away the ending of the film.”

By this time he had already generated disgruntled tweets from Scream fans understandably miffed that he’d ruined the ending of the movie. But this tweet — in which he appeared to suggest that his review had never contained a spoiler — sent the Twitterverse into a tizzy.

“You DID give away the ending, and you’ve changed the wording since. I read your original review last night,” wrote one. “It was in the first line of the review! Changing it after the fact does not alter Google cache,” said another. And another: “absolutely spoiled it for my friend Laura yesterday. Great to alter the review, but gross to lie about it.” And another: “what was your motivation behind revealing the killer initially? I sincerely would like to know.” And there were many, many, many more.

I published my story approximately four hours after I contacted him — you can read it here — which provided, thanks to the power of Google, proof that the copy of his review had changed, though neither I nor the numerous people who read his original review would have needed such verification. After all, we saw it with our own eyes.

I wasn’t the only one to write about #Schembrigate. Glenn Dunks, of the popular blog Stale Popcorn, wrote:

“… you could imagine my surprise and shock when a prominent Melbourne-based, but nationally published in Fairfax newspapers such as The Age and Sydney Morning Herald, film critic — a very big fish in this rather small pond — went and announced who the killer was within the opening sentence of his review! I immediately went to Twitter and Facebook and announced this abhorrent unprofessional act.”

“JIM! YOU NAUGHTY MAN! YOU REVEALED THE KILLER IN THE FIRST LINE OF YOUR “PIECE”!

“I would quote exactly what you wrote (I still have the tab open — surprise!) but I’m not really inclined to spoil movies for others. Call me old fashioned.”

“Refusing to admit your mistake was bad enough. But to have the gall to then chastise those who had read your original review and felt upset at having a film ruined for them, smugly assuming that by linking to your updated spoiler-free version you’d cleverly outsmarted them through some kind of impressive interweb sorcery?

“I couldn’t think of a single justifiable reason why Schembri would spoil the film and he needed to be pulled up on it. I’d made my point and thought that would be the end of it.

“Wrong. Turns out that Schembri has a Twitter account and he fired back the next day with this comment — ‘We do NOT give away the ending …’

“Huh? I quickly clicked on the link to pull up his review once again. He was right. He hadn’t given away the ending … but that’s because he’d changed his review!”

No doubt there were others, but when Monday morning rolled around Schembri kicked off round 1 of his “time machine” campaign with one person in mind: me. Over the course of the next nine hours, Schembri emailed me twice, privately messaged me twice and tweeted about me (and a time machine) to his followers 17 times. He wrote:

“Big News from the World of Science: Luke Buckmaster claims Jim Schembri has a time machine.”

“Will Luke Buckmaster Please Explain how Jim Schembri got hold of a time machine?”

“Where, oh where, can this time machine be? Maybe Luke Buckmaster can tell us the type. Was it a DeLorean? A Hot Tub? Rod Taylor’s chair?”

“Maybe this alleged time machine is under the box set of Walker: Texas Ranger… nope … Could it be under the AB-Fab special-ed box … nope…”

“Still looking … still looking … where is this confounded time machine? Luke Buckmaster says we have one, but where, oh where can it be?”

Much to the bewilderment of those watching on Twitter, this went on and on and on. It caused so much confusion among the Twits that the words “Jim Schembri” became one of the top trending topics in Melbourne. No small feat, given Schembri has fewer than 400 followers.

Two other journalists from The Age participated in this bizarre online vaudeville: comedy writer Craig Platt, who sadly did not offer his appraisal of the comedic merits or lack thereof of Schembri’s outburst, and technology editor Gordon Farrer, an old editor of mine.

Schembri is a divisive personality, inside and outside Fairfax. In 2008 a screenwriter for the AFI award winning film The Black Balloon incorporated as part of his acceptance speech the curt words “f-ck you Jim Schembri!”

And just last year Schembri apologised to his colleagues at The Age for making insensitive remarks during a panel on journalist ethics. As reported by Crikey, Schembri said among other colourful turns of phrase that ethics were “an optional extra rather than an ethos” at the Fairfax broadsheet.

There were many more time machine-related tweets but it’s hard to count them because Schembri periodically deleted and reposted them. As one Twitterer observed:

“I’ve lost count of the number of times @jimschembri has tweeted, deleted said tweet, and tweeted the same thing with a slight change.”

One assumes the “time machine” themed outburst is a warm-up to the main event, in which Schembri will publish a defence he’s spent the past four days working on. As a commenter on my blog wrote: “We all stuff up from time to time. We all make mistakes.”

I know I’ve made some boo-boos in the past, and I like to think I’ve learnt from them. I’ve certainly learnt that the best thing to do when you stuff up is to say a variation of “sorry, my bad” and move on. It can be hard, and it won’t appease everybody, but people generally accept a mea culpa.

What they find harder to accept is somebody who doesn’t admit they made a mistake and instead engages in a bizarre performance the online community may remember for some time. 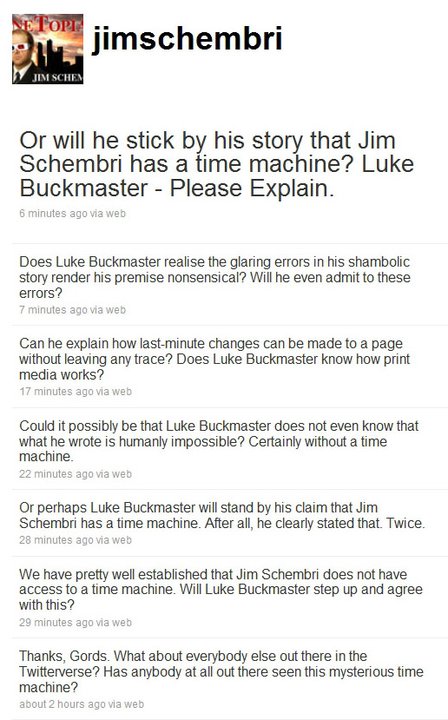 The Age published its review of Scream 4.on Thursday written by Jame Wilson.

“online community may remember for some time”. I’ll say! I still remember his review of Frankenstein lamenting that it wasn’t a patch on the Boris Karloff version… not a hint of knowing the Mary Shelley original, which the Branagh version more closely followed. What a dill.

This link was posted on the pure poison blog at the beginning of the month;-

It’s become one of my favourite stories and i think it sums it up nicely.