Australian rare earths exporter Lynas Corporation's plans for a controversial Malaysian refinery could be delayed or shelved as locals continue to swamp the company with protests and the Greens expand their campaign to halt radioactive shipments from its Mount Weld mine.

Australian rare earths exporter Lynas Corporation’s plans for a controversial Malaysian refinery could be delayed or shelved as locals continue to swamp the company with protests and the WA Greens expand their campaign to halt radioactive shipments from its Mount Weld mine.

As Australian shareholders rebel over a related-party transaction set to tip $30 million into the pockets of CEO Nick Curtis, Malaysian residents have stepped up their war against the plant, claiming the future of their country is at stake in the construction of the $230 million factory in the port city of Gebeng, Kuantan.

The Lynas Advanced Materials Plant, or LAMP, will refine massive shipments of hazardous material from Mount Weld, located 4,000 kilometres away, with the end product cropping up in everything from smart phones to smart bombs. While rare earths are not themselves dangerous, a by-product, thorium, contains potentially dangerous levels of radiation.

Protesters say the waste will be disposed of close to local fishing villages and tourist hot spots, despite the ASX darling insisting that it will build 12 acres of “interim” storage pools to submerge the poison in perpetuity.

While Malaysian regulators drag their feet, a pincer movement of Greens and protesters have cited the $100 million environmental disaster caused by a Mitsubishi plant on an adjacent peninsula that is still being scrubbed down two decades after being mothballed.

A recent town hall meeting descended in acrimony when locals, protesting under a “Save Malaysia, Stop Lynas” banner, launched a broadside against the local Pahang State Development Corporation for ignoring their concerns. On Friday the Malaysian press reported that a follow-up briefing in Gebeng had been postponed with a state MP saying senior government officials would instead be bussed in to hose down fears. 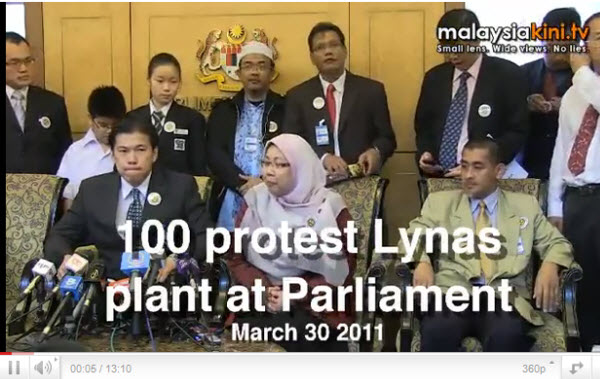 Malaysian opposition leader Anwar Ibrahim is using the dispute for political leverage, issuing calls for a “campaign to alert people of radiation pollution dangers” ahead of national elections set for later this year. The plant is located in Prime Minister Datuk Seri Najib Razak’s home state.

Lynas will generate $1.7 billion a year in exports for Malaysia — about 1% of the total economy — and the government has offered the firm a 12-year tax holiday under a “strategic pioneer” preferential investment agreement.

However, red tape continues to haunt the project. The Malaysia Star reported last week that the country’s Atomic Energy Licensing Board was yet to receive a pre-operation license application and that the process would take at least six months to finalise. That would delay the plant’s opening by at least one month from its expected September switch-on date.

A letter sent by Greens’ WA senator Scott Ludlam to Lynas — whose market capitalisation has soared to $4 billion since its listing — accused the company of “pursuing a project in Malaysia that will not be subject to appropriate environmental monitoring and regulation.” Due to a flaw in the relevant legislation, Ludlam says no Environmental Impact Assessment was required for the plant despite Lynas — co-directed by nuclear power spruiker Ziggy Switkowski — claiming to have submitted all required permits.

But the Greens, while expressing solidarity with Malaysian opposition groups, are also in a tricky position because of their objections to nuclear waste. Rare earths are used in green-friendly products including solar panels, the Toyota Prius and wind turbine generators alongside more pernicious applications like Boeing smart bombs.

“The Western Australian government does not support the importation and storage of other countries’ radioactive waste,” Moore responded, inferring that the problem was Malaysia’s to tackle.

Chapple is also concerned about the transport of rare earths from Mount Weld to the Perth port suburb of Kwinana, calling for the project to be abandoned completely. The Mining and Pastoral Region MP likened the scenario to Magellan Mines’ recent grounding of its lead trains after poisonous particles were found in the air:

“I would think that people living along the transport route and the Kwinana community would have something to say about a radioactive substance being shipped through their communities in this manner,” he said.

“I am deeply worried that the proposed Lynas Mount Weld operation plans to remove only the bare minimum of thorium from its rare earth product, apparently so as not to trigger special export license requirements for hazardous material.”

Lynas has rejected suggestions it had situated the plan in Malaysia to avoid the prickly question of radioactive waste, writing on its company blog that it couldn’t find a suitable industrial site in Australia that produced the required chemicals, gas and electricity and had a plentiful supply of water.

Two weeks ago, the firm won approval from the Australian Foreign Investment Review Board for Japanese investors to plough $325 million into the company in exchange for a guaranteed rare earth supply. China has historically produced 95% of the world’s rare earths but in recent months has slashed its export quotas, forcing Japan to pursue their own side deals and sending Lynas’ share price skyrocketing.

Amazingly, the Australian media has so far ignored the stoush, instead producing glowing reports on surges in the shares and a successful $55 million placement. But respected international publications like The New York Times have been far less reticent, devoting 1,300 words to the fracas six weeks’ ago.

A curt spokeswoman for Lynas told Crikey she was “very confident the processing plant is safe”, adding that it was “non Hazardous”.

The spokeswoman said the firm was involved in a “dynamic” process with the regulator and had submitted everything it had asked. But she refused to respond to the WA Greens, claiming that the party’s media release was a “blog post”.

She then repeated the words “thank you” several times before hanging up the phone.

The fresh controversy comes after a group of Lynas shareholders despatched a letter over the weekend threatening legal action over a related-party sell-off of a Lynas polymetallic resource to Forge Resources.

Curtis is a director and 15% shareholder in Forge and stands to reap $30 million in performance shares if the $20.7 million deal succeeds. Independent auditors Grant Samuel have declared the transaction “fair and reasonable” although they added that it would be difficult to know the true value of the asset without an open sale process.

Crikey Clarifier: what’s all the fuss about rare earths?

Would it be too much to expect a report like this to present some quantitative information such as the concentration of thorium in the ‘hazardous material’, so that we can better gauge the seriousness of the issue, and in particular judge whether phrases like “massive shipments” with “potentially dangerous levels of radiation” are justified?

If Ludlam were fair dinkum about a) solving the problem and b) climate change, he’d be pushing to send the thorium-enriched material to India, where there’s every chance it will be turned into electricity.

Re: the headline – I think it needs to be noted that there is a difference between “Malay” and “Malaysian”.

For God’s sake, everybody really knows that money is more valuable than human health and even life.
The life saving and seriously caring Medical ‘Profession’ has proof of this beyond any argument.
They are a bit stupid about understanding their own evidence though, but I will do it for them at no charge.

The people of Pahang are understandably pissed off. They will get radioactive waste on their doorstep while the Malaysian Government and their cronies in Kuala Lumpur will make out like bandits.

20 million people live on the Malaysian peninsula and this is supposed to be a good place to store radioactive thorium? The idea of storing nuclear waste here is made even more ridiculous when you consider that, Australia, the country where the shareholders live who have benefited from the production of this radioactive waste is a far superior location for the storage of such nuclear waste.

Seriously. Bury it here. Bury it here and if we can’t stomach the idea of doing that, perhaps we shouldn’t be mining rare earths at all.