Insulting Abbott is not cuttting through with voters

Calling Tony Abbott a scare monger for his views on what a carbon tax would do to employment is not working for the Gillard government.

Insulting the opposition does not get you far. Calling Tony Abbott a scare monger for his views on what a carbon tax would do to employment has been the most consistent theme of Labor’s political defence of its global warming proposals. That the strategy d0es not appear to be working was shown again in this morning’s A.C. Nielsen polling figures in the Fairfax press. The way things are going there is little chance that enough Independent MPs will support the tax proposal.

Which might be the best result for Labor. The biggest risk for the Coalition is that its campaigning is so successful that the issue is taken off the agenda by being defeated in the Parliament!

If it is really serious about having the carbon tax then it must find a way of convincing voters that the consequences of doing nothing will be worse than the costs involved in acting to limit carbon dioxide. At the moment the debate is all on Tony Abbott’s terms and simply repeating that the “science” is settled convinces no one unless the government without explaining what the settled science is predicting.

Official people smugglers. In Australia I guess we would classify the government of Italy as that despised criminal the people smuggler. Faced with thousands of arriving boat people from a north Africa torn by revolutionary conflicts, Italy is trying to have its burden shared by others in Europe. Hence the issuing of visas that supposedly allow unlimited travel for asylum seekers throughout the European Union and the provision of free train tickets for many of them to visit France.

The French reaction has been a bit like Tony Abbott’s really. The French government has stopped the trains at the border and complained to Italy.

A pokies truth neither side wants to mention. An intriguing peak into the truth about poker machines was provided at the weekend by Human Services Minister Tanya Plibersek as she continued with the theme that Labor intends to be tough on welfare bludgers and cheats. Ms Plibersek promised to get tough on pensioners who had been identified as being major spenders at the nation’s casinos.

A Victorian aged pensioner who lost $280,000 through gambling had been found by authorities to have had more than $1 million in undeclared income and been overpaid $96,000 in pension money. A 34-year-old man on unemployment benefits lost $94,000 at casinos. He was found to be a self-employed tradesman and has to repay $45,000 in Newstart payments. Then there was a  NSW disability pensioner had gambling losses of $350,000.

What she didn’t mention was the well known practice of criminals wanting to launder black money of turning cash into casino and club cheques and employing pensioners of one kind or another to do it for them. It is this activity that skews so heavily the amount of money won by the gambling houses from a small number of players.

The operators do not want to admit that they are aiding and abetting criminals in this way and nor do the anti-pokie brigade want to weaken their case by letting the real truth be known.

We happy oldies. The young and the old are the happy ones. Society’s grumps are the middle aged. That’s the finding of Bert van Landeghem, an economist at Maastricht University in Belgium, in a paper to be presented this week to the Royal Economic Society annual conference at Royal Holloway, the University of London. 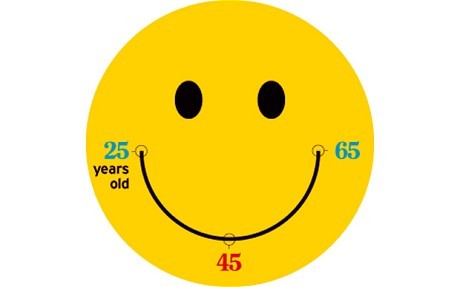 The London Daily Telegrqph reports that Mr van Landeghem has found that satisfaction with life starts to drop as early as a person’s late 20s and does not begin to recover until well past 50.

While young adults are carefree and full of hope for the future and the over-50s have come to terms with the trials of life, the research indicates that those in the middle feel weighed down by the demands on them.

The study found “a substantial dip in happiness during the middle of people’s lives is the equivalent to becoming unemployed or losing a family member”.

What goes up can go down. It couldn’t happen here could it? Chuck Whitehead, general manager for Coldwell Banker’s Southwest Riverside operations, talking of the north San Diego housing market:

What if everything you thought you knew about the budget was a lie?

I think the way to help problem gamblers would be to remove ATM machines from the clubs or hotels.
Club members or hotel patrons would be able to use their debit cards, no cash payments.
Therefore the people who are not problem gamblers would have their money on them to use before they went into the club or hotel. It would then necessitate the problem gambler having to leave the premises to obtain extra cash. How many would return? Most hotels and clubs know their problem gamblers. There seems to be an agenda to the whole gambling issue. If people are gambling illegally then charge them and get rid of them. Don’t make the rest of the population pay for the few.

Not to nitpick or anything but Maastrict is in The Netherlands, although it is walking distance from Belgium. I know from experience after I stayed there on holiday, went for a brisk after-dinner walk and ended up crossing an international border.

While we’re nitpicking: “An intriguing peak into the truth about poker machines”?