They’re a great idea these portable pissoirs, but for God’s sake let’s put them where they’re needed.

Sydney’s portable pissoirs, which go on trial for the first time tonight, are a great idea. But for God’s sake let’s put them where they’re needed.

Our quick Crikey survey shows that Kings Cross — where four mobile urinals will be trialled for revellers from this weekend — is way off target.

Why? Well, not one single AFL star or League hero has been caught with his pants down in this area — or caught by police — since records began.

So here’s where we really need them. And need them now.

Sydney’s Sussex Street — where the Sharks’ Paul Gallen narrowly missed his mate’s head as he sprayed the pavement after a night on the turps in 2009. 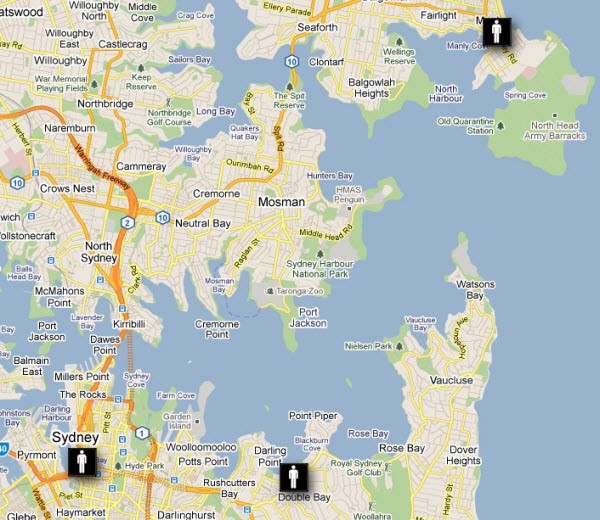 And let’s not let Melbourne footy players get caught short either. A portaloo inside the Pretty Please nightclub in St Kilda, where Demons star Brent Moloney allegedly relieved himself against the bar last Sunday morning would be a top idea.

Another outside the St Kilda Police Complex might have saved Richmond captain Kane Johnson from having to siphon the python in public in 2008.

And a mobile urinal outside another Melbourne nightclub could have saved Carlton’s Brendan Fevola a $10,000 fine from the Blues and a lot of embarrassment that same year. Other areas prone to showers include Wollongong, Byron Bay, Brisbane and the Gold Coast.

However, it’s probably not worth putting one in Jupiters casino on the Gold Coast, where Julian O’Neill famously urinated on a croupier in 1995. Nor would there be much point in having one in South Brisbane’s Fox Hotel where the Lions’ Mitch Clark unloaded onto a cigarette machine last year.

Those guys were clearly too drunk to see anything. One excellent feature of the new mobile urinals — which are a great success in Amsterdam — is that four men can use them at once, which should be great for team bonding.

And if cost is a problem, the AFL and rugby league have sponsors who should be busting to help. Lion Nathan, which makes Toohey’s and XXXX — the top-selling beers in NSW and Queensland — already sponsors the Manly Sea Eagles, whose lads made waves last weekend. And Carlton Draught — which pumps millions into the AFL — could pay for the stalls in Melbourne.

Just think what it could to clean up the two sports’ image. And how good would those logos look on the shiny white porcelain. Assuming the boys aren’t too blind to see them.

where the Sharks’ Paul Gallen narrowly missed his mate’s head as he sprayed the pavement after a night on the turps in 2009.

Why can’t they just keep ’em in nappies?

Seriously, there’s no helping the sort of people who would piss on a live cigarette machine. It’s almost a shame the fella didn’t electrocute himself through his wedding tackle.

Anyway, I thought there were enough natural urinals out there. They’re called trees.

There’s also an obvious opportunity to recycle if the beer companies collect the urinal contents.

“where Demons star Brent Moloney allegedly relieved himself against the bar last Sunday morning would be a top idea.”

Actually did no such thing.