Does Wilkie really deserve this?

For the life of me I cannot understand what the Independent MP Andrew Wilkie has done to deserve blanket coverage of his Duntroon day. 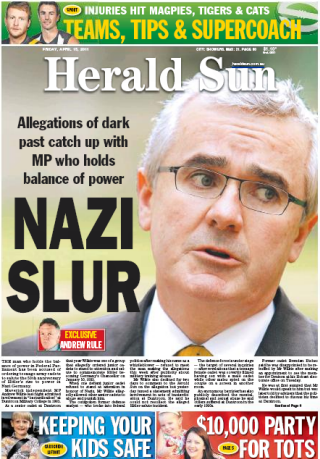 So 28 years or so ago a trainee officer at the Duntroon military college acted in what was then the stupid way of the place. He engaged in an act of bastardisation of a younger recruit, continuing the tradition to which he had been subjected when a college new boy.

So what? It is not as if Mr Wilkie is calling for a restoration of such practices. While he says he cannot remember the particular incident to which the Herald Sun has taken its egg beater to, he admits to being ashamed in hindsight for some of his activities as an officer cadet.

Thankfully times have changed and the high spirited excesses of youth are not as condoned as they used to be but that is no justification to go digging into someone’s past to find what are now irrelevant incidents.

Let he who is without sin … is what I say. Or should be just start trolling through the past of Herald Sun editors to see what excesses we can discover?

An official decree threatens pilots with a fine of up to 40,000 euros (£36,000) or six months in prison for descending below 3000ft above Carla Bruni-Sarkozy’s large seaside villa at Cap-Nègre, Lavandou.

The decree came a year after France’s first couple irked locals by declaring beaches surrounding the residence off limits.

The see, hear and speak no evil management style at News. With every arrest of a News of the World journalist — see the story elsewhere in Crikey today of the third current or former NoW journalist being arrested by Scotland Yard — the stranger the management style of the Murdoch press appears to be. It just stretches credibility to breaking point to believe that the upper echelons of management did not know how the troops below them were obtaining their exclusive exposes.

The great pretense goes on. As the finance ministers of the world gather for another IMF talk-fest, the pretense that all is well in Europe goes on while the evidence mounts that the crisis for many European nations is getting worse rather than better. Overnight the price that Greece must pay to borrow on international markets reached a new high: The markets clearly think the country is broke and will not be able to pay its debts despite the so-called bailout package from the European Union and the IMF.

The other costs of unemployment. A team of researchers at Stony Brook University in the United States have found that the risk of premature death was 63 percent higher in people who experienced an episode of unemployment compared to those who did not.

The study, “Losing Life and Livelihood: A Systematic Review and Meta-Analysis of Unemployment and All-Cause Mortality,” included an analysis of working-age men and women mainly in Western countries over a 40-year period. Employment and unemployment were documented in the studies for people in all phases of their careers. Individuals were followed for different lengths of time in the various studies.

A further study by the Centers for Disease Control and Prevention reveals how the overall suicide rate rises and falls in connection with the economy. The study, “Impact of Business Cycles on the U.S. Suicide Rates, 1928–2007” is the first to examine the relationships between age-specific suicide rates and business cycles. The study found the strongest association between business cycles and suicide among people in prime working ages, 25-64 years old.

Crown needs a complete overhaul, starting from the chair, Helen Coonan. That's the only way to defuse the fury of shareholders.

In a move that shocked observers on all sides, the treasurer rejected the proposed purchase of Lion Dairy and Drinks after a string of controversy around Chinese business acquisition in Australia.

“He doesn’t swing Murdoch’s way”?
(How Green do you have to be?)

Not to mention what he did to Howard and his “Embedded Glee Club”, as they frog-marched us off to war in Iraq?

This job on Wilkie is the Phone-Hacker Ltd media group working at what they reliably do best.

There can be no such thing as a slur on the gaming industry. gangsters, crooks, rip-off merchants, sleazebags, Murdoch journalists, parasites … how can you slur that lot?

Presumably it’s taken News Ltd this long since the independents backed Labor to come up with some dirt on one of them. No matter how far fetched and no matter how long ago.