In an email from Fortescue's legal team to Vimeo, FMG says a controversial native title video is defamatory, misleading and "designed to intimidate".

Lawyers representing Fortescue Metal Group (FMG) and CEO Andrew Forrest have sent legal letters to a video hosting website requesting they take down a controversial clip of a native title meeting held in Roebourne last month despite issuing a denial to Crikey yesterday that they’d been in touch with Vimeo.

In an email from FMG’s legal team to Vimeo, Fortescue say the video is defamatory, misleading, “incites racial hatred” and is “designed to intimidate.”

Uploaded by Yindjibarndi Aboriginal Corporation, the video attracted 12,000 plays in nine days before being removed on Tuesday by the New York-based video hosting site in response to the threats.

A spokesperson for Vimeo confirmed that the videos had been taken down for legal reasons. Fortescue spokesman Cameron Morse told Crikey yesterday his company had not had any contact with Vimeo about the controversial video. When contacted by Crikey this morning, Morse declined to clarify his comments.

Michael Cheah, legal counsel representing Vimeo, says the video was removed after the hosting site received correspondence from lawyers for FMG and Forrest alleging that the video contained defamatory and misleading statements about them.

“Please note that we take no position on whether any of the statements in the video are true or not,” he said. “Rather, we have merely determined that the video could be subject of a defamation claim and, under Australian law, could subject Vimeo to liability.”

In a series of emails sent to Vimeo last Thursday and obtained by Crikey, FMG legal council Scott Adams requested the video be removed immediately. He cites a number of reasons for the video’s removal, including that it “incites racial hatred”, is “threatening” and is “designed to intimidate”.

Not content with the response from Vimeo, FMG sent a legal letter dated Monday 11 April (also obtained by Crikey) suggesting the video breached both Western Australian defamation law as well as federal competition and consumer law. Adams requested the video be removed immediately or the company would reserve rights to undertake legal action. 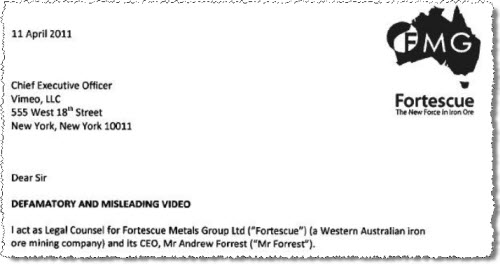 Fortescue are currently seeking a land use agreement from native title holders to allow the mining giant to build a new iron ore mine in the Pilbara. With negotiations at a stalemate and a Federal Court judgement looming, Forrest has attempted to strike a deal with a breakaway group of 200 Yindjibarndi people.

Forrest and a group of FMG lawyers and executives held a meeting last month in Roebourne last month in an attempt to secure an agreement with the breakaway group. In the video native title owner the Yindjibarndi Aboriginal Corporation express repeated concerns over how the meeting was conducted.

Yindjibarndi Aboriginal Corporation CEO Michael Woodley says the video helps to depict the difficulties of an indigenous group in negotiating a land use agreement.

“At the end of the day the video shows exactly how Twiggy Forrest and his company behaved on the day,” he told Crikey. “What they were doing was out of order in terms of a process which is supposed to be respecting native title groups and our discussion for any land use agreement.”

Meanwhile, the PR battle is hotting up over the native title deal. As Crikey reported yesterday, Cameron Morse recently edited the mining giant’s Wikipedia page to remove all references to the dispute and the video. Forrest is also facing some criticism for his GenerationOne indigenous unemployment program.

Greens spokesperson for indigenous affairs Senator Rachel Siewert says there are clear and established processes for negotiating with traditional owners.

“The contrast between FMGs’ behaviour in undermining the governance of Yindjibarndi and the public face of Andrew Forrest on Aboriginal issues we’re used to seeing in the mainstream media is almost like Jekyll and Hyde,” the Senator told Crikey.

“The kind of behind-the-scenes machinations suggested by the video, to create or exploit a split in the community, if true, are deplorable — and contrast starkly with Mr Forrest’s professed support for Aboriginal community development.”

The WA opposition has also begun to apply the blowtorch to the mining magnate for his conduct at the meeting. WA opposition leader Eric Ripper said on Tuesday he would refer the deleted video to parliament.

Meanwhile, Michael Woodley says his organisation will keep uploading the video, even if it gets deleted. Woodley says FMG have not been in contact with the Yindjibarndi Aboriginal Corporation in response to the video.

“For the wider Australian public and I guess the world, most people know about native title and what it is but they might not understand the process and what it means to indigenous groups in terms of negotiating a land use agreement,” he told Crikey.

Thank you for doing your part to keep this issue at the forefront of the public consciousness, Crikey.

If the Yindjibarndi Aboriginal Corporations’ allegations are true, then FMG have been exposed red handed, in an attempted exploitation of traditional owners which rivals colonial dispossession of land, in its scope and greed.

Whilst Twiggy himself, in my opinion, has little to fear from scrutiny of his personal conduct at the meeting, the actions of his subordinates, who can only be assumed to be acting on his direct instructions, were insulting, dismissive, overbearing and downright sinister.

Forrest is just another tyically thuggish, bullying miner. This reality is a million miles away from the way the Australian and the ABC portray him

I’m no lawyer but the vid just seems to show one sides version of what went on at a public meeting. The main actors speak for them selves and I can’t see how distributing video of what people actually did is defamatory. But as I said I’m no lawyer.

Not being a lawyer I also can’t understand how Ron Bower was able to act for the Wirlu-Murra group and be paid by FMG. In my world that’s one of them conflict of interest.

It’s predictable that anti-free speech legislation ends up being used by the wealthy and powerful to defend their interests.

Chilling to see the reference to “incites racial hatred” in FMG’s complaint.

It isn’t defamatory. Forrest’s legal thugs are doing what thugs do; they are threatening; they are intimidating. It’s bluff-and it is regularly done.

They managed to scare Vimeo off. Let’s see if they scare YT.

GenOne has been a good investment methinks….

The rest has me too boiling mad to comment further.

…………except to say that Bower is a maggot.