Stephen Smith and the ADFA scandal totally dominated broadcast coverage of politics this week, with print media not quite as overwhelmed with interest in the escalating battle over the ADF’s “culture” and what might need to be done about it. This was added to by a generally low profile from the PM this week, things settling down in NSW following the election rout.

Pauline Hanson got a ton of coverage as she looked more and more likely to snaffle one of the ridiculously easy to get spots in the NSW Legislative Council — 2.5% of the vote will generally do it for you — only to miss out by about 1000 votes in the end thanks to Family First preferencing the Greens ahead of her. So there you go — can’t we stop this silliness and just get rid of State Upper Houses altogether?

Andrew Wilkie unsurprisingly the other main mover as the pokies war hots up, significantly sparked by his claims of receiving death threats — as some of us continue to be stupefied by the argument that private clubs choosing how to spend money in their communities (and on their foyer waterfalls) through a highly regressive and selective tax is somehow the best social outcome. How about all pokies having a 100% return? Now that would actually be gambling and clubs providing entertainment, not just a tax on the weak. 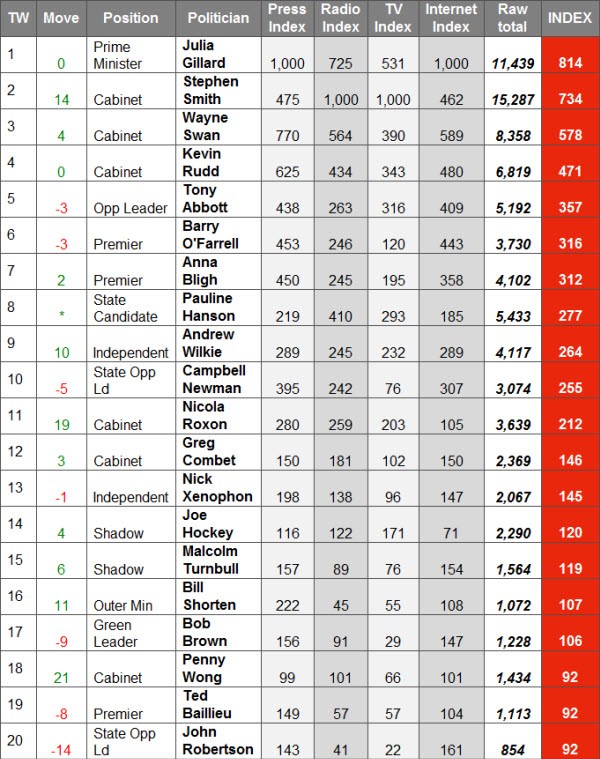 Smith up to second in this list as well, but issues such as the carbon price and the NBN continue to get more play on talkback than Defence issues.

The NRL’s supercoach (now there’s an underused cliché) is swapping the Princes Highway for the Pacific Highway, as new private owner of the Knights Nathan Tinkler flexes his financial muscles.

Stephen Smith, back from the (political) grave to shake up WA politics