Behind the scenes at The 7PM Project, US cinemas threaten not to show films in video-on-demand dispute, how Al-Qaeda is using online game theory to recruit the masses. Plus NY Times page views fall after paywall and what does Sidney Harman's death mean for Newsweek?

Behind the scenes at The 7PM Project. Occasionally the satellite feeds of TV shows are captured and put up on YouTube. Here, someone has published the audition feed of the popular Channel Ten news show before the show went to air. While there’s nothing particularly interesting happening, it gives one a good insight into the “magic” of television… 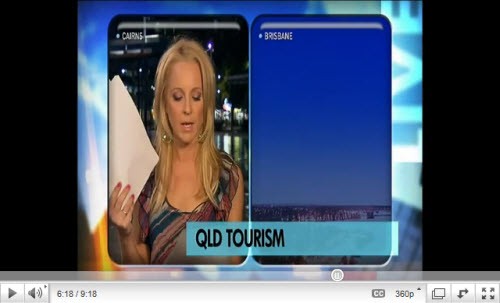 “According to Hitwise, in the 12 days after the paywall was erected, total page views for NYTimes.com fell between 11 percent and 30 percent per day.” — The Wrap

What does Sidney Harman’s death mean for Newsweek?

“When The Washington Post Co. decided last year that it was time to get out of the weekly newsmagazine business, only a handful of suitors came forward with offers to take over Newsweek, and of those, only one, stereo equipment mogul Sidney Harman, was deemed an appropriate steward for the venerable title. Now Harman is dead at age 92, and Newsweek’s future is once again in doubt.” — Forbes

“US cinema chains are threatening to banish some films from their screens in response to a contentious video-on-demand plan by several Hollywood studios to allow new releases into living rooms within weeks of their big screen debuts.” — The Guardian

“According to interviews with about a dozen early investors and employees, the story of how Twitter was actually founded begins with an entrepreneur named Noah Glass, who started Odeo in his apartment. The story begins about six years ago…” — Business Insider

“The counterterrorism community has spent years trying to determine why so many people are engaged in online jihadi communities in such a meaningful way. After all, the life of an online administrator for a hard-line Islamist forum is not as exciting as one might expect.” — Foreign Policy

Newspaper Death Watch, a blog devoted to newspapers in the USA, is sometimes
very interesting. They often have really interesting market and industry data.
(If somebody is interest in all that then it is worthwhile to look for older entries
on that blog.)
http://newspaperdeathwatch.com/index.php?s=newspaper+revenue

The reasons for the decline of US (and other newspapers) are, among others,
their sins in the financial crisis, the NYT included. Sins that are catching with
them now.
http://rinf.com/alt-news/media-news/where-was-media-when-sub-prime-disaster-unfolded/2854/