The Australian Securities and Investment Commission's commendable move yesterday to tackle glossy retail prospectuses (prospecti?) inspired Crikey to examine some of the more egregious examples of fluff and bubble when corporates raid the wallets of middle Australia.

The Australian Securities and Investments Commission’s commendable move yesterday to tackle glossy retail prospectuses (prospecti?) inspired Crikey to examine some of the more egregious examples of fluff and bubble when corporates lean on middle Australia for cash.

So, which prospecti clearly tipped the scales in favour of the ridiculous when it came to enticing everyday investors? The focus so far has been on Myer’s 2009 shocker which splashed with heaps of photos of Jen Hawkins and Danni Minogue’s baby daddy but also a faux-bonhomie setup of Crikey‘s ex-Myer Doncaster colleague Zoran Tosev discussing strategy with CEO Bernie Brookes. 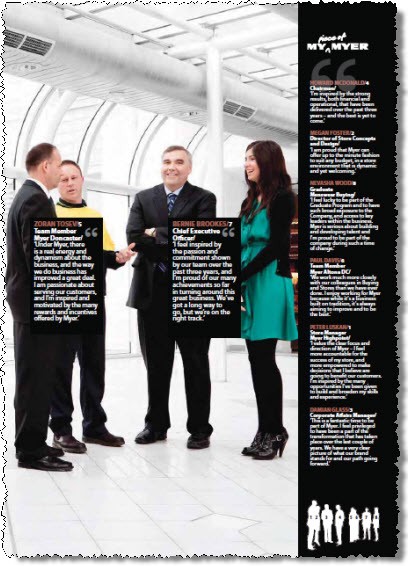 While the Myer share price has tumbled, last year’s QR National float has gone the other way, despite an offer document featuring a train plastered with the words “be part of something big” and randomly bolded text like drive profitability and experienced. The Anna Bligh-backed investment has proved a sure bet, as the privatised behemoth sacks staff to improve its bottom line with shares hovering at about $3.42, a 39% increase on the $2.55 offer price. It seems this employee-turned-model could see the blue skies ahead. Meanwhile, the Nathan Tinkler vehicle Aston Resources floated with a $1.2 billion bang last year and is counting on its NSW Maules Creek coal project to eventually bring in the bikkies. Aston’s chairman, former Deputy Prime Minister Mark Vaille, is doing a top job bending the ears of locals concerned about the environmental impact of more mining but those same protesters might have been better off had they been enticed by the neon lights of this prospectus last August. A disclaimer down the bottom states that Aston doesn’t actually own Hong Kong and that Maules Creek is still a long way from completion.

Or what about camping supply company Kathmandu’s 2009 effort, in which the company’s “attractive and stable margins” were coupled with breathtaking vistas of backpackers sprawled on rocks? Far from Aston’s bonanza, the shares started at a low $1.70 and temporarily tumbled into one of the document’s picturesque crevasses before recovering their footing on a solid first half profit result a few weeks back. But the champion of prospectus debacles has to be the nearly-collapsed RAMS Home Loans, which floated in 2007 just before the global financial crisis netting hundreds of millions for founder John Kinghorn. The document, slammed by the Australian Shareholders’ Association at the time for misleading investors on risk and funding sources, also contained some cuddly graphics of first home buyers savouring their new found freedom. Perhaps ASIC should point companies back to the good old late 1990s and the initial Telstra float in which a few dour photos of phone boxes were counterposed with hard data on the company’s prospects — which in the pre-NBN era looked very rosy indeed. The government has never wanted a tough corporate regulator. Now ASIC has been significantly weakened again, just as the government is loosening banking regulation.

The pandemic is likely to exacerbate existing trends toward highly concentrated markets and investment, changing the nature of economic and political power as it does so.

New investors have been making risky gambles while lockdowns continue to bite — and ASIC is concerned.

In our company’s shareholding club, as a bit of fun, we estimate the value of a share based on the amount of heavy earth-moving equipment on a company’s website and prospectus.