They're supposed to be the awards that give credibility to TV's popularly-nominated gongs, but mystery surrounds the panels of "experts" deciding the peer-nominated Logie Awards.

They’re supposed to be the awards that give credibility to TV’s popularly-nominated and widely-criticised gongs, but mystery surrounds the panels of “experts” deciding the peer-nominated Logie Awards.

When TV Week released its list of nominations for this year’s Gold Logie last week there were some suprising inclusions. Chrissie Swan from The Circle was one. Asher Keddie from Offspring was another. Both came from shows that did not necessarily draw huge audiences, but still managed to make it on to the list for the year’s most popular television personalities.

But while attention has been focused on the popular categories and how they are awarded, the prestigious industry-voted awards have also come under some scrutiny. Just who sits on the panels seems to be one of the industry’s well-kept secrets. One television producer told Crikey it’s unclear who the judges are, what running orders they’re given and how they are selected.

In a statement released last Friday, ACP Magazines publisher Peter Holder addressed concerns raised about the voting system, insisting the peer-nominated categories have been judged by a mix of independent judges. To remove any potential industry bias, network apparatchiks have been nixed in favour of “completely independent” industry experts. Seven panels consisting of at least five judges pick the winners of the 12 awards, for drama, comedy, acting and news broadcasts.

Voting is completed via a site set up by pollsters Roy Morgan with judges given a unique password to log on and vote. TV Week editor Emma Nolan declined to reveal the list of judges when contacted by Crikey.

“We have approached the experts in each field — for example, drama — people on our hit list have decades of experience behind them, have a list of credentials to their names, and are looked at highly by their peers,” she said.

The networks, meanwhile, are rolling out extensive marketing campaigns to win their stars a gong. Channel Nine (owned, like TV Week, by Nine Entertainment Company) have been consistently plugging Today host Karl Stefanovic through a series of “Do you love Karl?” TV ads. The ABC is spruiking its main chance Adam Hills — despite disquiet at the public broadcaster for engaging in the process — while Channel Ten has been using social media to try and help Swan over the line. 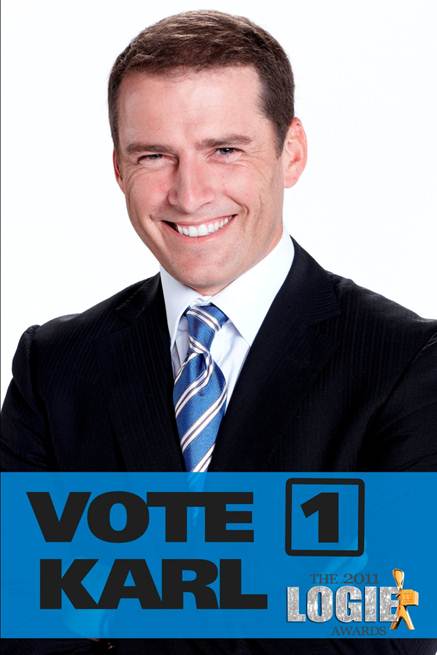 Social media and Facebook, in particular, have become a key battleground. The Circle, Packed To The Rafters, Today and Offspring all ran social media campaigns to try and get their stars nominated for the Gold. Talkin’ ‘Bout Your Generation host Shaun Micallef was not spruiked by his network and was a surprising omission from the final nominations.

The ABC campaign has been toned down this year after its cheesy 2008 push to help Chris Lilley, Andrew Denton and Hills win the Gold drew the ire of MediaWatch. A more demure Aunty now relies on Facebook, it’s official blog and Google adwords to convince viewers to throw a few votes its way. But that campaign still annoyed some. One ABC radio presenter Rhianna Patrick tweeted: This year’s event marks a big change in how viewers vote for the awards. Gone are the days of readers filling out a TV Week coupon and sending in the self-addressed envelope. This year, for the first time, voters are now able to vote for the popular gongs on the Ninemsn website (another Nine Entertainment Company entity) and via SMS.

TV Week argues this is fairer and industry sources seem to agree. One insider told Crikey that, in the old days, some station publicity managers provided staff with copies of TV Week for them to nominate stars from each publicist’s portfolio. The publicists would then drive around looking for post boxes in different areas to ensure the process looked more “legit”.

But the switch to online voting may also be a consequence of the dire drop in TV Week‘s readership. At its 1984 high water mark, the magazine was selling more than 850,000 copies a week — now its circulation is around 188,000. Peter Holder says the benefits of opening voting up to the online masses will see a more democratic vote.

“While we know criticising the Logies is a favourite media pastime, I think it’s important to note we’ve recognised historical faults in the system and gone to considerable lengths over the last few years, and this year in particular, to address them,” Holder said in his terse statement last week.

Today it was revealed invitees have been asked to refrain from bringing their smartphones to the Crown Palladium, lest they tweet something they (or the organisers) might otherwise regret. (The delayed telecast meant some stars last year were spoiling results for the home audience.)

“…spoiling results for the home audience.”

You’d really have your day ruined if you discovered the winner of a highly dubious awards competition a couple hours before it was orchestrated to be made public. Well, you would if your IQ matched your shoe size.

Since the powers that be have decreed there should be no live tweeting from the Logies this year.
( Because they apparently seem to think that delayed broadcasts are still the way to go)
I think Crikey should step up to the plate and award prizes for the first tweeter to let the various cats out of the bag…..So to speak. 😀

I think you need to check your facts. Voting isn’t available online this year. It has been available in the past, but this time voters have to SMS or phone in their choices. Just to make sure that voting is restricted to the truly stupid this time – you’d have to be brain-dead to want to pay to vote.

It really doesn’t matter anyway, no-one cares about the Logies. We’ll get the same old format, the same old people and yet another fifth-rate drunk lured in from the US to present an award to whoever got their mum to phone in the most votes.

Gone are the days of readers filling out a TV Week coupon and sending in the self-addressed envelope.

Presumably the organisers eventually twigged that “self-addressed” envelopes were not reaching them.

@Zut: reminiscent of watching the Brownlow (AFL) awards. OMG, that is boring. The Logies into the same category. Why can’t they broadcast it live, if they have such a fear of premature … announcement?