The News of the World hacking scandal

News of the World hacking scandal:

If you read this story (widely distributed across News Limited titles worldwide): a throwaway story and a shot at a celebrity (Hugh Grant) — nothing out of the ordinary there … except they “forget” a few important details … namely the publican in question was an ex News of the World muckraker involved in the ongoing phone hacking scandal, and that he boasted to Grant over drinks that knowledge of the practice went all the way up to the editor of the paper — something strenuously denied during the parliamentary inquiry into the affair you referenced today. How do we know? Because Hugh Grant was wearing a wire!

News Limited is facing compensation payouts of tens of millions of pounds, and potential jail time for editors and managers. Funny how they only mention the bar bill…

Incidentally, to see the “journalist” in action, here’s a clip from this week’s 10 O’Clock Live — a UK comedy/news show on Channel 4: 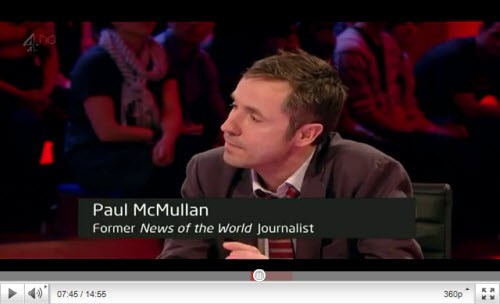 Fast forward to 6:45 for a debate about the phone hacking scandal with ex British deputy PM who also had his phone hacked. Interesting to see how the wheels turn…

Geoff Russell writes: Re. “Simons: journalists do dirty work, but ethical rules matter” (yesterday, item 13). Margaret Simons spends more than a few sentences attempting to wrestle with deep moral issues but doesn’t quite hit the dart board. It’s the content that matters.

A stolen document which reveals a cover up involving death and mayhem may be just as stolen as one which reveals that Tony Abbott and Pauline Hanson shared a womb but the former should be leaked and the latter is nobody’s business, despite the huge surge in sales it’s publication would deliver.

I wonder how many people are in possession of evidence of serious wrong doing but keep it secret because they signed a confidentiality document which clouds their moral judgment with fear.

Donald Dowell writes: Re. “Mayne: why hasn’t Rupert personally apologised?” (yesterday, item 12). I couldn’t help but notice the lack of articles in the News Corp papers about the mushrooming scandal concerning the News of the World phone -hacking as outlined by Guy Rundle , Margaret Simons and Stephen Mayne.

Surely reports that old Rupert himself tried to pressure Gordon Brown to get his Labour backbenchers to layoff the scandal would be a huge story? Imagine if it was some part of the Fairfax media empire that was facing this crisis .

Take yesterday’s Media section in The Australian, it prints a bare basics story of News Corp apology to a small number of celebs and politicians, but where was the allegation of Rupert`s interfering etc? You’d have thought Mark Day would be all over this as the biggest story in the media world, surely?

What a contrast to News Corp reporting of the non-story of Climategate last year. I suppose we will have to wait till “Cut and Paste” jogs all concerned into action, eh.

Jackie French writes: Re. “It was 50 years ago that a flight of fantasy became fact” (yesterday, item 11). Apologies for being pedantic about Ben Sandilands’ otherwise superb article, but Honeysuckle Creek outside Canberra was the first (and purpose built) “point of relay for the moon landing pictures”. Parkes was second. The Dish was fiction.

It's been 11 years since the phone hacking scandal first broke, but the company is still feeling the effects.

Whatever role he played in the toppling of Malcolm Turnbull, it is far from the first time Rupert Murdoch has been an active political force.