Our politicians have been labouring under beliefs born under a credo of Western pre-eminence, and cheap oil and cheap debt, that has helped fashion our policies towards climate change, writes Giles Parkinson of Climate Spectator.

For the past two decades, our politicians have been labouring under a set of beliefs born under a credo of Western pre-eminence, and cheap oil and cheap debt, that has helped fashion our policies towards domestic and international energy and climate change.

This belief has had other characteristics: that markets can solve all problems, including resource and environmental ones; that industrialised nations will lead the world in tackling greenhouse emissions and the rest will follow; that energy efficiency is an easy “free lunch”; that carbon pricing will drive low-carbon investment; and that technology will save the world. Hooray!

Professor Michael Grubb, an expert in international climate policy from Cambridge University, describes this as the “Age of Innocence”. Unfortunately, climate change and energy policy have turned out to be more complex than expected, the agenda has been driven by politics rather than economics (boo!), and now a new world order has emerged to challenge the orthodox view on how international climate action will evolve.

This latter development is of critical importance. Where once the divide on climate change policies and initiatives was framed as a “north-south” issue, Grubb says it has been superseded by a division between energy importers and energy exporters. It turns out that the leadership of the industrialised world in climate change and energy issues has been fractured and many emerging economies are now taking a prominent role.

The common denominator between economies such as the EU, Japan, China, South Korea, India and Brazil — all countries that are now either implementing or looking to implement significant cuts to their energy and carbon intensity — is that they are all energy importers. Grubb says it is for the same reason that California can implement a cap-and-trade scheme while the US cannot — its policies are not able to be bought by the fossil fuel interests, unlike Washington, which was subject to a $500 million lobbying campaign from Big Oil.

This is leading to two kinds of policy responses that, Grubb says, are creating a major divide on the “ridge of oil depletion”. Rather than a clustering of “low-cost” energy futures around higher and lower emission levels, countries are either investing in low-carbon futures, based around high efficiency and low-carbon electricity, such as renewables and nuclear, or electric cars; or they are investing in high-carbon futures, extending their dependence on fossil fuels by pursuing unconventional fossil fuels (such as tar sands and shale gas), synthetic oil in transport and on other environmental issues beyond carbon.

The key difference is that low-carbon futures involve a high capital cost but less risk from supply and price shocks. China, as an energy importer and boasting a low cost of capital thanks to its massive savings pool, is able to lead the charge on the low-carbon futures. The high-carbon futures feature a lower up-front cost, but with considerable risks in the short, medium and long term, not least being to the atmosphere.

Grubb says that studies show that the world has likely reached the halfway point in its budget of total emissions if it is to have the best chance of limiting average global warming to 2°. The remaining half just happens to coincide with the likely emissions of the remaining known conventional fossil fuel reserves, not including coal. For this reason, it is possibly best to leave them where they are.

What are the implications for Australia? Well, because of the varying energy interests, it means that the chances of a top-down approach on climate change — with a global cap-and-trade scheme and all that goes with it — are remote. Grubb predicts the emergence of a powerful low-carbon coalition based around energy importers. And he says producer countries will struggle with the threat of carbon leakage, even if it is not as real as some make it out to be, so they will give away “shed loads” of allowances. But that is “not a sustainable way of decarbonising the economy”.

Instead, the issuing of free permits is likely to be superseded by the introduction of border carbon tariffs on imports, probably by 2020, imposed under a series of “carbon added” regulations implemented through a treaty developed by that low-carbon coalition.

Grubb says there is a precedence for this in the way that international trade talks evolved — they gave up at UN level, and a break-away body led to the GATT process and ultimately the WTO. The key question in the latest iteration, he suggests, will be whether a low-carbon coalition will be purely importer-driven, or whether any major producers will get on the low-carbon road and be at the table.

Australia’s interests, naturally, lie in being part of that low-carbon coalition. But that would involve some major strategic decisions, both on a carbon price and on energy choices. It’s interesting to read some of the proposals that Australia should be adding a carbon surcharge to imports. The US tried a similar tactic at the Bali climate talks — China and India simply laughed at them. And they’d do the same to Australia. Grubb suggests Australia’s interest would be served in being able to develop a carbon price and possibly using that as a justification for not having its exports taxed by other countries.

Grubb says a carbon price plays a crucial role in knitting together the three key policy pillars on climate change. These are policies that revolve around innovation and infrastructure investment (evolutionary economics), that substitute low- for high-carbon investments (classical economics) and invest in energy efficiency and “no regrets” policies (behavioural economics). At the heart of them all, he says, comes carbon pricing, because it can drive investment preferences as well as influencing consumer behaviour.

Australia has some key energy choices too. Grubb says gas will clearly pay a large role, at least as an interim measure. The real decision is a strategic one: does Australia choose coal or solar? It’s the same choice being made by the rest of the world — but it is a difficult one, given the pressures brought to bear on the incumbent government.

Electricity prices will no doubt be a crucial part of the political equation. But Grubb makes an interesting point on this topic too, illustrated by the graph below. It shows that higher electricity prices do not necessary equate to higher electricity bills. Those countries with high energy prices tend to use it more efficiently, given time, and per capita energy expenditure is roughly constant across different countries. 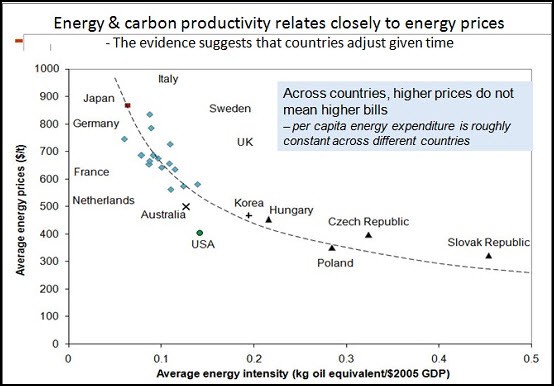 *This first appeared on Climate Spectator