Assange’s News.com.au serenade to Gillard. From the News.com.au homepage this morning. As our tipster suggested, we bet the verse isn’t a love poem … 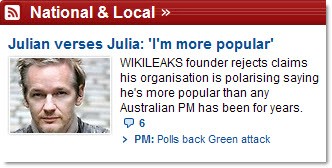 Leckie’s “dopes and idiots” at WAN.

“Seven Media Group boss David Leckie has been accused of calling the board of West Australian Newspapers — a company he will soon run — a collection of ‘dopes’ and ‘idiots’.” — The Australian

“The editorships of the biggest two newspaper sections focusing on media and marketing have this week both changed, with Julian Lee finishing as marketing editor of the Sydney Morning Herald and Stephen Brook arriving as editor of The Australian’s Media section.” — Mumbrella

“An Egyptian blogger was sentenced Monday to three years in prison for criticising the military in what human rights advocates called one of the more alarming violations of freedom of expression since a popular uprising led to the ouster of President Hosni Mubarak two months ago.” — New York Times

“The need to protect consumer privacy online has been in the spotlight lately, more than ever. In February the US Senate created a new Judiciary Subcommittee on Privacy, Technology and the Law, which will be chaired by Sen. Al Franken, D-Minn.” — Techcrunch

“Mark Zuckerberg won a legal battle against former Harvard classmates who accuse him of stealing their idea for Facebook, but the feud made famous on the silver screen is not over yet. Cameron and Tyler Winklevoss must accept a cash and stock settlement with Facebook that had been valued at $65 million, a US appeals court ruled on Monday.” — Reuters

“Well, this is embarrassing. The Wall Street Journal ran a story last Thursday about how Phillies fans have mellowed on the Mets. More embarrassing, however, is the job the WSJ did on the stock photos accompanying the story. They reek of fakery. The WSJ ran a correction over the weekend…” — Deadspin

Really? You mock a spelling error on News.com.au but then write “Zuckerberg setlles (sic) for $65 million in Facebook feud”?