James Warburton’s 73-page affidavit paints a picture of an ambitious man, determined to get the top job at Seven or leave. 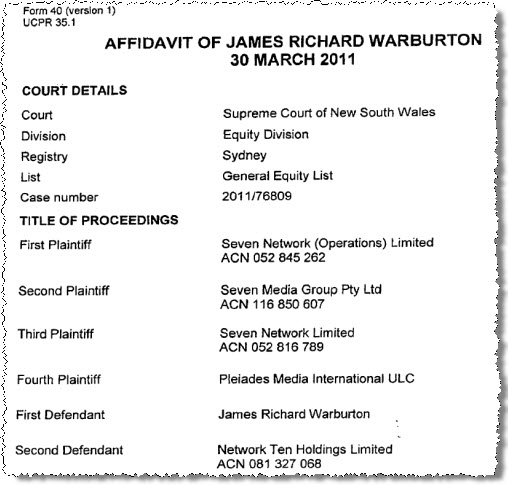 “I have to move aside, I’m not ready,” he continued, before warning Warburton, “I’ll be around, you know.”

Clearly, James Warburton was offered the world by Seven, but it couldn’t come quickly enough. And he didn’t trust his boss David Leckie to give up his hold on power.

“He (David) only likes TV, it worries me he will not let go,” Warburton told Seven’s chairman and major shareholder Kerry Stokes over coffee at Stokes’s home on February 26, four days before he signed with Ten.

Hours later, Warburton was at Lachlan Murdoch’s house for lunch, telling him: “I’ve been offered everything I wanted at Seven, but I’m not sure I can work with David Leckie.”

Warburton’s 73-page affidavit paints a picture of an ambitious man, determined to get the top job at Seven or leave. It also suggests that the top brass at Seven (including Kerry Stokes) were desperate for Leckie to retire.

“David doesn’t like it … [but] I may be forced to make a decision in the next few months,” Stokes told Warburton in November. “If I make that decision, David will be removed from the business.

“Together in a pincer movement we can work on David,” Stokes told him three months later. (Page14)

Stokes’s lieutenant Peter Gammell also weighed in: “David has to realise he’s in the twilight of his career,” he told Warburton. “We know we need the change … David needs to front this for obvious reasons.”

Even Leckie’s mate Peter Meakin, head of news and current affairs, is said by Warburton to have told Stokes that the boss’s time was up.

But getting rid of the man who made Seven such a success was never going to be easy, unless Leckie agreed to go.

“He’s not interested in change,” Warburton told Gammell. “He might tell you that he is but it’s not true.” (Page 8)

But for all that, Leckie was clearly keen to keep Warburton with the network: “You’d be mad to consider Ten, they’re f-cked,” he told him two days before he signed on. (Page 20)

And he appears — even on Warburton’s evidence — to have accepted that he would have to make room for the younger generation, however reluctantly: “I have to do it. Stokes has told me I have to step aside and make some room. I’m tired. I do have to support it.”

“Between Nine and Seven I’ve been a CEO for 20 years,” Leckie mused. “I’m tired, it’s time, I have no choice. I will still be involved though. I will not leave my office, I will still call people, I will still call the shots. I am the frigging boss of the f-ckwits at WAN, I will fix them right up. It will take me five minutes to fix the idiots on the WAN board. They are all f-cking dopes. They wouldn’t know a thing about television; they don’t even get how to put a paper together. They just do what Kerry tells them. F-ck me, Western Australia.” (Page19)

Leckie’s affidavits, which were also released this morning by the court, are much less colourful than the language others have him speaking, and their main purpose is to dispute the account that Warburton is giving. For example, Leckie denies giving Warburton the green light to go ton Ten with “no dramas”. 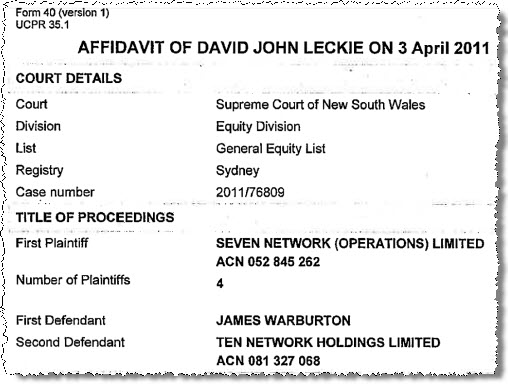 He also says that Warburton told him he wouldn’t serve as head of TV and said: “All I want is to be CEO.”

On the subject of Warburton’s negotiations with Stokes on February 26, Leckie cliams Stokes told him: “I’ve met with James; he doesn’t want to go to Ten or Nine. I’ve made him an offer and I think he’s fine with it.”

When Leckie asked Warburton how that meeting had gone, the sales director supposedly replied: “It went really well, but I want to look you in the eye. I want to move into your office now.”

Leckie also denies saying that Stokes had told to move aside. And he denies calling the WAN directors “dopes” and “idiots”.

But he agrees he did call Seven’s media buyers “f-ckwits”. So did Warburton, he claims. Or in the language of the classroom: “He did it too, miss.”

Why would Seven help Ten with AFL games?

My oh my. I’d relish reading the transcript from a long expenses-paid lunch featuring the above cast.

Anyone with half a brain who has read, or rather endured, the West Australian could only come to the same conclusion as Leckie.

“Affidavit” is that Welsh for “enough”?

Tis said that there are more egos per square metre in TV land than in any other industry in the country.