Millionaire ad man John Singleton's wallet might be lighter after shouting the bar after a recent Group One victory at Rosehill, but the lion's share he'll bank of this morning's $20 million "Its [sic] un-Australian" campaign on behalf of the Australian Hotels Association and Clubs Australia is almost certain to cure the hangover.

Tanned ad man John Singleton’s wallet might be lighter after shouting the bar after a recent Group One victory at Rosehill, but the millions he’ll bank from his “Its [sic] un-Australian” campaign on behalf of the Australian Hotels Association and Clubs Australia is almost certain to cure the hangover.

Even without the apostrophe, or the required political disclaimer in The Australian Financial Review, the $20 million campaign sprung to life today with ‘Who Voted for a Licence to Punt?’ full-pagers in The Australian, The Fin and News tabloids in which the ‘address’ on the licence is mysteriously spelled ‘adrress’. The accompanying TV ad, in which ‘licence’ is mysteriously spelled ‘license’, features two everyday blokes bantering over a beer about Andrew Wilkie’s pernicious plan to rein in their punting. 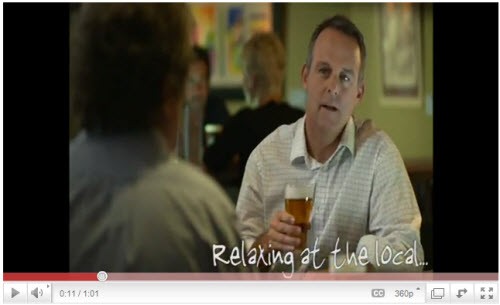 The script emanating from the savvy creatives at Singleton’s Banjo Advertising — an agency allegedly “set up against the status quo”, has to be heard to be believed:

Bloke 1: “This licence to pay the pokies the feds are talking about. That’s a bit of a worry.”

Bloke 2: “See some bloke in Tassie got voted in and Gillard needs his vote and he hates pokies”

Bloke 2: “I know. I mean, what’s next? They’ll be telling us how many beers to have next. Gillard’d be crazy to back that wouldn’t she?” 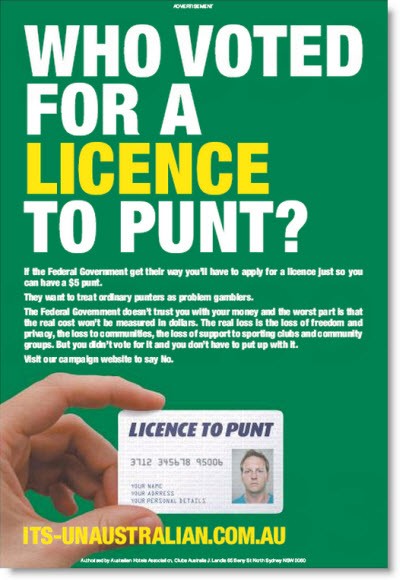 Singleton has a history with the industry that extends well beyond the three Harbour City pubs he currently owns. In 2003, he helped Clubs NSW complain about a higher tax rate levied by then-premier Bob Carr and he remains a beer player through his private label Bluetongue.

The ad continues the former ALP supporter’s stellar tradition of blokey screeds pioneered by this liquored up West End shambles from the early 1980s, and comes a year after Andrew Forrest, Gina Rinehart and Clive Palmer secured his services to spruik the interests of the big miners through his failed Keep Australia Afloat Foundation (the deal was nixed but the idea was later taken up by Association of Mining and Exploration Companies in its “You’re gonna get whacked” campaign).

He later did a complete 180 on the anti-excise stance during the election campaign, campaigning against “Labor’s health cuts” for Dr Ed Bateman’s Primary Health Care.

That effort was just the tail end of a slew of ads infesting the nation’s airwaves paid for by big business. Rather than simply vote for their political interests through the nation’s legitimate democratic channels, Australia’s super wealthy have decided to fill the vacuum caused by decline of organised labour as a popular force.

Last year, the Australian Workers Union had brief crack back with this ad slamming Clive Palmer’s wealth (“for decades the mining industry has been taking things out of Australia”), with business critics ironically deriding the effort as “class warfare”. 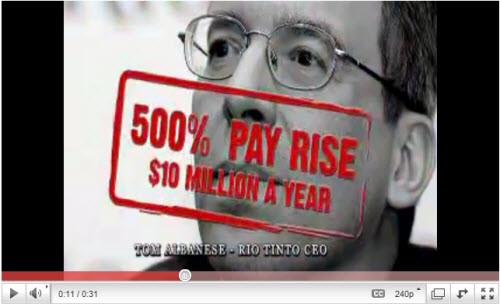 But throughout the current pokies debate the NSW branch of the Liquor Hospitality and Miscellaneous Workers Union has remained disappointingly mute, seemingly more concerned about its members’ jobs than the millions sucked out of workers’ pockets by problem gambling.

The Minerals Council famously spent $17.2 million on TV ads as part of its ‘Keep Mining Strong’ and the Alliance of Australian Retailers had picked up the cudgels with its beautifully edited $5 million scare campaign against cigarette plain packaging (“It won’t work so why do it?”).

But Crikey‘s favourite pro-business shout-out has to be Independent Distillers’ ‘Chop the Tax on premixed drinks‘ from the 2008 Gippsland by-election, in which a flannelette shirted bourbon drinking wood-chopper takes an axe to Kevin Rudd and Wayne Swan’s metaphorical head.

Meanwhile, the pitched battle over Wilkie’s mandatory pre-commitment technology continues, with anti-gambling campaigners hoping it will carve inroads into Australia’s $5 billion a year problem gambling debacle and the states’ $5 billion in tax revenues.

The Tasmanian independent is wisely leveraging his support for the Gillard government on the hope that, this time, there won’t be another craven policy backdown that screws Labor’s core constituency.

Star of the Clubs campaign is a strident anti-pokies campaigner

Singleton is a dinosaur. He ran a campaign for big tobacco in 1992 to try and stop the advertising ban in NSW http://tobaccocontrol.bmj.com/content/1/1/50.full.pdf

If he’d been alive in the nineteenth century, who better turn to turn to run campaigns against Nanny State issues like child labour, slavery & exhibiting the deformed for entertainment. Onya John. A great Aussie.

I’ve been trying all day to vote ‘yes’ on the website… but it won’t work. Anyone had any success? I fear the result may differ if I click the other button.

Small point but perhaps the reason the NSW branch of the Liquor Hospitality and Miscellaneous Workers Union has not been heard from is that they technically no longer exist. The union has had a name change and is now called United Voice.

I also tried voting yes and couldn’t. I wonder if they’ll allow comments on their little articles that run counter to their narrative.

“I wonder if they’ll allow comments on their little articles that run counter to their narrative.”

I tried posting a very politely written response this morning, suggesting that perhaps their $20 million might have been better spent re-adjusting their business model to be less dependent on the revenue generated from the vulnerable and addicted, but alas, it didn’t rate a mention..

However the poll is funny, I bet they didn’t expect such a large response in favour of the reforms. At one point today it was practially 50/50.