The whole scandal has blown up mere weeks after News was given the go-ahead to take a controlling interesting in Sky Broadcasting.

Private Eye has a joke it has done ohhh a couple thousand times of the form: Iraq an apology. Previous editions of this paper may have given them impression that Iraq was “a noble crusade that will be over in a week”. This was a misprint. It should have read “disastrous quagmire graveyard of hubristic folly”, etc, etc.

News Corp’s announcement of an apology for the phone-hacking scandal, published in the UK this weekend was of that order.

“Following an extensive internal investigation” it began — five words, five lies — “and disclosures through civil legal cases, News International has decided to approach some civil litigants with an unreserved apology and an admission of liability in cases meeting specific criteria.

“We have also asked our lawyers to establish a compensation scheme with a view to dealing with justifiable claims fairly and efficiently.

“We will, however, continue to contest cases that we believe are without merit or where we are not responsible.”

The announcement of an apology and an open-ended commitment to out-of-court settlements comes three days after two News of the World employees were arrested and their homes and offices searched, and at the same time as The Observer carried a story from an unnamed former Labour minister saying that Rupert himself approached Gordon Brown to try to have various Labour backbenchers dissuaded from attacking News Corp over the matter.

No date is given for the process (which allegedly tried to convince Tony Blair to advocate on News’s behalf), but News turned on Brown pretty swiftly and spectacularly during the dying days of his regime.

News Corp’s apology will initially extend to only eight people — the shiny Sienna Miller, inevitably features as first plaintiff in news stories, and seven other dweebs (former Labourista Tessa Jowell, etc, etc), and the planned fund has scope to pay out to another 20 or so.

But many say that News is being optimistic about the numbers who will be eligible for a payout, and the numbers who will accept one if offered. Many will take the money and run, especially celebs, but there are others who appear willing to take it all the way. Two in particular are of importance: former deputy PM John Prescott, and former MP George Galloway.

Prescott’s phone was certainly hacked after he left office — it may have been so while he was incumbent, and that may have occurred with other cabinet members, including the PM (or his aides). If that’s the case, and it can be established, then no amount of money will get News out of schtook.

And if it has hacked a government-issue mobile, rather than a private one, people will be going to prison for quite a while. But Prescott has been the man in the spotlight over this.

Galloway is another proposition. The ex-Labour MP, who then did a term in the interesting Respect group (Trots, Muslim activists, some Islamists and one Stalinist), has previously gone to the mat, and won, against The Sunday Telegraph after it ran with fabricated documents falsely implicating him in Iraq payoffs.

Galloway has had confirmation from the Met — eventually — that his phone was hacked, and he appears to be willing to take the matter all the way to court, as a political cause.

He claimed this weekend that the apology was just a way for News Corp to try to stop the scandal reaching Rebekah Brooks, the UK News Group CEO. The ultimate victory would be to put Brooks behind bars, and she may have set herself up for this when she told a Commons committee that News “paid police for stories if it was in the public interest”.

The footage is worth watching, if only to see her-then boss Andy Coulson, sitting beside her, go green and interject that News acted “within the law” — which, of course, paying cops for information is not. 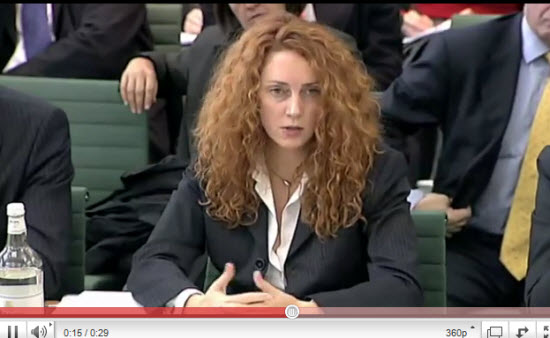 The whole scandal has blown up mere weeks after News was given the go-ahead to take a controlling interesting in Sky Broadcasting, the UK’s largest cable TV outfit — with the fig-leaf of hiving off Sky News to an “independent” body of owners.

The broadcasting regulator and the government have refused to open the matter, saying its entirely separate — a decision that may prove excruciating for them if News Corp’s operating secrets are laid out before the world, in a series of court cases. There are more than 50 police going through the trove of News’s emails that they could no longer avoid re-opening the inquiry.

Wow. Wow. Right up to this weekend, News Corp looked like it was in control of the process. Now the matter has acquired a life of its own, and no one really knows where it will end. Wow. Wow.

The cops also need to explain why they seemed to try to bury the matter. Payments for stories also need to be investigated. An independent commission against corruption, anyone?

You have to ask, from the way the “the fuzz” have been dragging their “foot”, what was hacked into, under the kilt of Scotland Yard?

I’ve never been a shareholder in Limited News – I’d be wondering where my hard earned had been going, with this sort of “executive oversight” of my investment.
Who’d have thought being diagnosed with both “masculine-bovine-orduraphobia” and nyctophobia (“Fear Of Being Turned Into A Mushroom Syndrome”), would have paid off one day?

Wouldn’t it be nice to see the Murdoch goons finally, somewhere, anywhere, be bought to heel?

Lets hope at least one person takes this ‘all the way’ and exposes the whole rotten scandal, including, as previously mentioned, the non-action of Scotland Yard.

And to think Rupert’s lovely wife married him for his youth, virility and good looks.
❓ ❓ ❓ Yeah.