Media outlets worldwide are declaring that Rupert Murdoch has apologised for outrageous phone hacking at his British tabloids, but the man has said nothing.

Media outlets around the world are declaring that Rupert Murdoch has apologised for outrageous phone hacking at his British tabloids.

But Rupert Murdoch himself hasn’t said anything.

Here is the sum total of the seven paragraphs printed on page two of yesterday’s News of the World, plus the five-paragraph corporate statement from News International emailed to journalists on Friday and that’s it, folks. 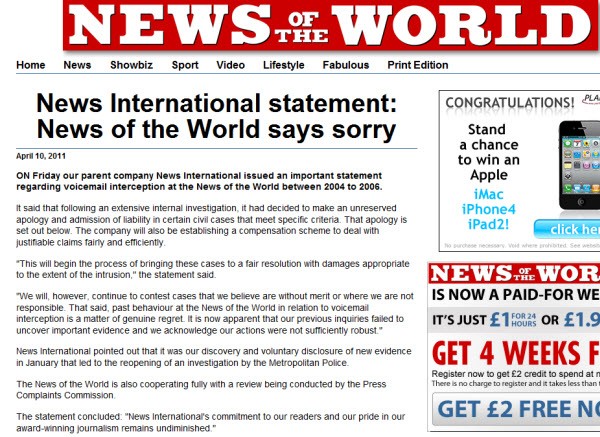 No quotes from Rupert and his name isn’t even mentioned. There is also nothing on the News Corp website, the News International website or any statement lodged with a stock exchange.

Coverage in various News Corp publications has also been sparse.

Everybody knows that Rupert Murdoch dominates News Corp but when it comes to biting the bullet, the bloke is nowhere to be seen. In fact, Rupert hasn’t spoken publicly on this issue since the 2010 AGM when we had the following exchange:

Stephen Mayne: what’s your personal view of the phone-bugging issue in the UK involving Andy Coulson and Clive Goodson the former royals reporter? There has been a lot of press about it.

Rupert Murdoch: we have very very strict rules. There was an incident more than five years ago. The person who bought a bugged phone conversation was immediately fired and in fact he subsequently went to jail. There has been two parliamentary inquires, which have found no further evidence or any other thing at all. If anything was to come to light, we challenge people to give us evidence, and no one has been able to. If any evidence comes to light, we will take immediate action like we took before.

SM: did you read the 5000-word piece in The New York Times claiming they had spoken to no less than 12 former editors and reporters for the News of the World, confirming that the practice was widespread?

SM: The actual committee said in its report, there was “deliberate obfuscation” by our executives, there was “collective amnesia” by the executives and you’ve just demonstrated this again, and this point …

RM: I’m sorry. Journalists who have been fired, who are unhappy, or work for other organisations — I don’t take them as an authority, and least of all I don’t take The New York Times as authority, which is the most motivated of all.

Interesting in light of the weekend story in The Observer, which details an allegation from a former minister in Gordon Brown’s government that Rupert Murdoch used his political influence and contacts at the highest levels to try to get Labour MPs and peers to back away from investigations into phone hacking.

Murdoch’s fellow News Corp directors should now be stepping up and taking action to change Rupert’s “whatever it takes” culture.

Jeez that would never happeen here…. would it?
Crook politicians kissing his clacker to get his press to give them the nod……….
Crook coppers thta will do anything for money…..
Crook reporters that get the exclusive scoops……….
Nah, its not happening here.

And it’s all about Steve. What a surprise.

At least, Liz Bernard, Steve has been asking relevant questions – what has the other media been doing here??

SusieQ: Steve was one of them.

It’s been sickening to watch Rupert Murdoch and his information dumbing-down organisation throw their weight around for the last few decades. And what has he actually achieved? He has taken journalism and TV news reporting to an unprecedented low.